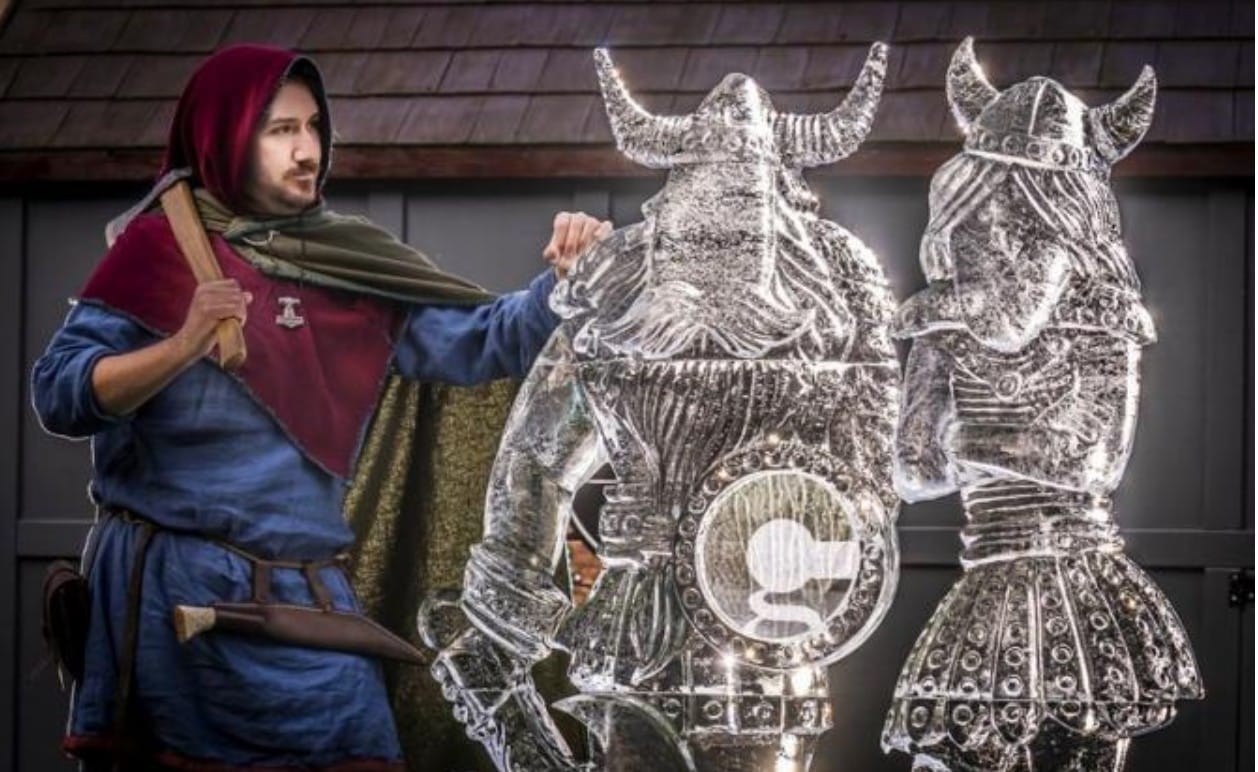 VT: Problem is, this isn’t the 6th century when most emigrated north.  Then again, by the 13th Century, even the Khazarian (Fake) Jews who controlled the region had fled to what is now Poland and Germany behind the Golden Horde.  But read on…

They keep saying Viking but it keeps looking like Swastika

SV Pressa: As they say, this has never happened before, and here it is again! The politicization of the “Norman theory” about the emergence of Russia has brought so many troubles to both Russia and Europe, that for a long time it seemed that the Old World had enough and forever “ate” this topic. But almost 100 years after one notorious Austrian artist decided to call the Russians “Untermensch” on the basis of the idea that the most civilized Scandinavians brought statehood to the barbarian Slavs, the apologists of this theory are again raising their heads.

Thus, the Anglo-Saxon bioarchaeologist Kat Jarman, in her book “Kings of the Rivers”, dedicated to the history of the Vikings, allowed herself several conclusions, which, if desired, can be interpreted in exactly the same way as the ideologists of the Third Reich interpreted the “Norman theory”.

In particular, in her work, she claims that they say, “Russian nationalism has traditionally denied that the Rus were Vikings,” and President Putin personally “anathematized the Scandinavian origin, which would call into question the political and cultural unity of the Slavs,” embarking on the path Soviet dogmatism, which despises “any influence of the Vikings on the politics, language or primitive religion of the Rus, while it is generally accepted that many Vikings were Rus”.

And now, focusing on the fact that Kat Jarman took part “in excavations in Vypolzov, in Ukraine”, the Spanish newspaper Ei Pais asks the question – do the Vikings play any role in the current Ukrainian crisis?

In one of the responses, readers are offered a quote from bioarchaeologist: “Ukraine has always had more academic freedom on the subject of the Vikings than Russia, and in recent years it has become more open to exploring the connections between the Rus and Scandinavians, as it has a desire to have connections with Northern Europe which worries Russia. Claiming a historical Scandinavian identity could encourage Ukrainians to join NATO.

What is this if not another attempt to convince the “entire civilized world” that the Russians are “Untermenschi”, who rejected some “truth” about the Scandinavian forefathers who brought them statehood, and barbarously attacked “remembering their Scandinavian identity” Ukrainians? I remember that in the 20th century a similar idea turned into concentration camps and the bloodiest war in the history of mankind. What are we at risk of facing now?

“Let’s start with the fact that no one has canceled the Norman theory, and no one argues that ancient Novgorod, later Kiev, was invited by the Varangian squads,” the head of the Center for the Settlement of Social Conflicts, a political scientist, shared his opinion with “SP” on this matter Oleg Ivanov. – But they were actually hired by the Russian princes, so to speak, for work, and in the ethnogenesis of the Russian ethnos, the Norman component is extremely insignificant. So to say that it was the Vikings who stood at the origins of Russia is at least stupid.

And to think that Ukrainians are somehow closer to the West is frankly ridiculous. At the time when the ancient Russian nationality was being formed, it simply could not be subdivided into constituent sub-ethnic. Its conditional modern division into Russians, Ukrainians, and Belarusians happened many centuries later. Consequently, all discussions on the topic of “Ukrainianness” of Kyiv as the cradle of Russian civilization more than a thousand years ago are not, by and large, scientific.

All talk about the fact that say, Ukrainians are more “historically pure” Scandinavians, according to Oleg Ivanov, is also a far-fetched fiction. Both the Turkic and the Finno-Ugric peoples equally took part in the formation of the Russian superethnos, which, by the way, no serious scholar disputes.

“If you take a historical look at the territory that Ukraine now occupies, you can see that for many centuries it was constantly under the control of one or another large state. Here is the Commonwealth, and Hungary, and Austria-Hungary, and Romania, and the Crimean Khanate, and Turkey, and later – the USSR, which it became part of as an autonomous republic, – add the politician, expert of the Anti-NATO commission under the State Duma , Doctor of Historical Sciences Vyacheslav Tetekin. – So, whatever one may say, it is a historical fact that Ukraine did not have statehood as such throughout its thousand-year history, having received it only in 1991. This is where the inventing of the history of the “great ukrovs” began, from the first mammoth hunters to the modern “ubermens”, from whom the “Russian barbarians” chopped off the Voronezh and Rostov regions.

“SP”: – With Ukraine, everything is clear, but why did Europe again need to let the genies of the “Norman theory” out of the bottle? It is understood that one “bioarchaeologist” is not the whole Old World, but the trend is obvious.

– From the moment the Russian people appeared on the historical stage as one of the active actors, the West has felt a sense of enmity towards them. The West absolutely did not need a strong player in the east, because he interfered with the colonial development of natural resources that was customary for him.

And if the West managed to cope with Africa, Latin America and Asia more or less confidently, extracting huge profits from there since the use of slaves on cotton or tea plantations, then it did not work out with Russia. All the numerous “colonial wars” with it, initiated by Europe and the United States, ended in failure.

But the West does not retreat, and even at this historical stage, it still does not abandon its centuries-old idea of ​​suppressing Russia as a rival of its “democracies”. It has reached, as we see, already to the Hitlerite methods of substantiating their aspirations. That is why, with such ease, all ideas about “Russian inferiority” appear in the lexicon of the current “democratic regimes”.

Which, for the most part, I dare to recall, were not so long ago an integral part of that huge military machine that invaded Russia in the 20th century. And NATO, by the way, in its essence, is its successor and analog. I think we should be reminded of this more often.

“SP”: – Under what conditions will this newly rising wave of accusations of Russia of barbarism be stopped before it leads to irreversible tragic consequences for the whole world?

– Persuading the West, I think, is useless. These guys understand only one thing – power. And I mean not only military power, but above all economic, moral and cultural strength. Therefore, the only way to force the West to respect Russia and bite the tongue, as it has happened many times before, in my opinion, is only one – to change, first of all, our socio-economic system.

Without the revival of our industry, without the appearance of super-modern technological achievements and solutions, this cannot be done. As long as the West feels our technological dependence on itself, it will continue to talk through its teeth with us, dialogue with it is impossible. He, of course, is afraid of our military power, but this alone is not enough, we also need a powerful economic upsurge. And for him, in turn, the rise of science is necessary. And for this, of course, an increase in education is required. And for this, accordingly, investments are needed.

“SP”: – Can the so-called “soft power” play a role in this? Books, films? After all, it would seem that “Kings of the Rivers” is a book about the ancient Vikings, but how wrapped up in this beautiful cover is the idea that the Russians, in fact, are “untremens” who do not remember kinship. How many people in the world will accept it on faith under such a “sauce”?

Books and films can certainly play a role. But only if they are supported not only by military power but also by economic prosperity. The country must show a model in the development of its economy and culture, then our books will be read and our films will be watched. Remember, in tsarist times, although the West was hostile to us, Tolstoy and Dostoevsky were highly revered there.

The “cultural power” effect is important and should not be neglected. But in modern times, when blind “idolatry” of the West dominates in our culture, when Western dances and Western songs are held in high esteem when art is built “in the image and likeness” of the West to the detriment of national culture, what kind of “soft power” is this? speak?