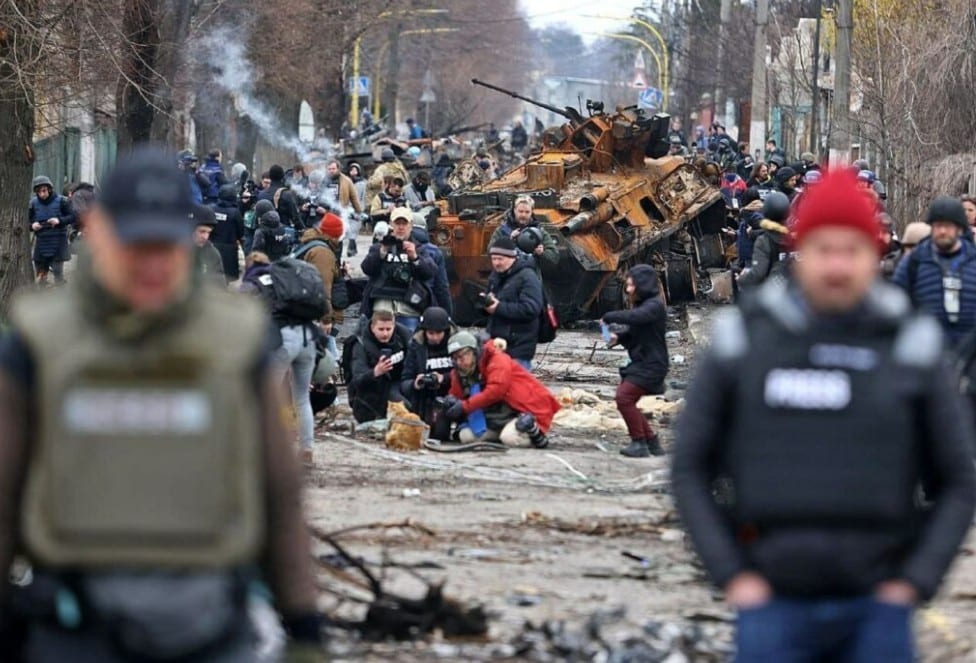 CRY OF THE SOUL. “Russian orcs, dear ones, good – do not stop!

“Good day. I am a Ukrainian citizen, I am in Kiev. We were evacuated from Bucha on March 12.

Our house (250 apartments) is completely looted. The Ukrainian press accuses the “Russian orcs” to have looted Bucha, and people believed it … But a week has passed, and these single neighbors who still live in the house, whispering after you swore at mom, the health of your children, and all the saints, horrified by the lawlessness they have seen, tells the truth…

The Russians left Bucha on March 30. And in the evening of the 31st, the looting began. A brigade of more than 10 people in civilian clothes worked, but they were guarded and commanded around the clock by the military of the Armed Forces of Ukraine. At night by headlamps.

They ransacked our house for three days (April 31, 1, and 2). All apartments were broken into and looted, except for the four where people were staying. Everyone knows about it, but they keep silent. Even those whose relatives serve in the Armed Forces of Ukraine and the police are silent! All of them are immersed in animal fear! When women approach them, they bow and start crying with horror in their eyes and say “thank you” in a trembling voice. Such a reaction because they know that those we consider ours will be killed immediately and without warning.

Four of six bodies found in the basement of a neighboring house were identified yesterday in Bucha. Two of them turned out to be door installers and two locksmiths! This is the elimination of witnesses, looters, who worked for three days for the “commanders of the Armed Forces of Ukraine”! (Breaking open apartment doors)

Also now our family has (or had) a dacha in a large village near Kiev. Talked to a neighbor on the phone. The village is destroyed every 3rd house. Many people were evacuated. Only those who have a cow stay …

Our village was robbed by units of the Armed Forces of Ukraine, who moved in as soon as the Russian troops left!!!! Ten days. All houses are broken into and robbed!!! People are silent. A neighbor with small grandchildren went to his daughter in Malin and gave the cow and chickens to the care of a neighbor … The neighbor saw that even furniture was taken from “ours” from his house, and ran to them: “Guys, why are you Robyte, we are our own She was immediately shot under the fence … And her husband too!

Why was Baba Masha killed??? Her milk cows mooed heartbreakingly for three days throughout the neighborhood, because the neighbors were afraid to leave the hut, not even to go to the toilet, and went to the pot … On the third day, the warriors of light took pity and cut the throats of the poor cows … our village had 70-80 inhabitants. And all of them were robbed and killed!

Do you think that Ukraine is fascist? No, it is not fascism … Nazis did not rob or kill their own! This Satanism is violent, senseless, and merciless! They are not “us”, they are non-humans!!! You could not help but understand that in the village, although few, there are still people left … although they sit in their huts and see what you have done to our village these ten days !!!! Neighbors see your crimes … bastards.

There are about 3,000 people left in Bucha and about 40 in our village. People have seen everything and they know everything and will tell everything !!!! You won’t kill all witnesses of your violent satanism? And even if you come back, you will not kill all of them! People can’t be killed … Thank God that someone came up with the idea of withdrawing Russian troops from Kiev … This decision is God’s admonition … It put everything in its place …

And most importantly. In the last three weeks our family lost everything: an apartment that we paid for 17 years, we built a summer house for 20 years, invested our soul, a car – everything … But, thank God, the children survived.

I still have pants, shoes, a shirt, and only shorts … I will survive this … Because I had a dream … That “Russian Orks” will be given by God, will return to my beloved Kiev, to my Bucha, to my village, and I will be able to enlist with them as a private to free my Batkivshchyna, my motherland, from the fierce Satanism that tortured our house in Bucha for three days and tortured my beloved village for ten days …

Please, “Russian Orcs”, dear ones, good ones, do not stop… For heaven’s sake dear ones!

Please publish my letter. I am in Kiev now and can’t report it myself.

According to Mikhail Mizintsev, head of the National Defense Control Center of the Russian Federation, territorial defense militants are conducting punitive raids in Slovyansk to check local residents for any “signs of pro-Russian views”

MOSCOW, 11 April. /TASS. The militants of the territorial defense for their pro-Russian views torture the residents of Sloviansk, and also threaten them with transfer to the Security Service of Ukraine (SBU) and reprisals against their relatives. This was announced by the head of the National Center for Defense Control of the Russian Federation Mikhail Mizintsev. According to him, territorial defense fighters are conducting punitive raids in Sloviansk, Donetsk People’s Republic, to check local residents for any “signs of pro-Russian views.”

“The reason for the detention is the history of calls with Russian numbers found in the phones, SMS and messenger correspondence condemning the current regime, subscriptions to Russian channels on social networks, and others.

The detainees are taken away in an unknown direction, subjected to brutal torture, threatened with transfer to the SBU, and as well as physical reprisals against relatives (murder, gang rape of wives and daughters), as well as being forced to equip strong points and checkpoints,” said Mizintsev, who heads the interdepartmental coordination headquarters of the Russian Federation for humanitarian response in Ukraine.

The colonel-general specified that the militants extorted from $500 to $1,000 for getting rid of the torment. Dozens of detained citizens did not return home, now nothing is known about their fate.