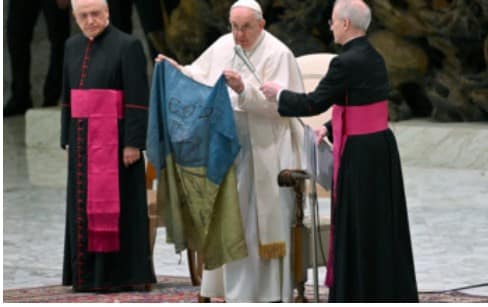 Yesterday, on April 6, Pope Francis took a step that outlined the Vatican’s new role both in the conflict in Ukraine and in global policy issues. During a traditional audience at the Vatican, Francis appeared with a Ukrainian flag in his hands, saying that it had been brought from the “exhausted city of Bucha”. The flag, by the way, belonged to a certain “4th Cossack hundred of Maidan”, that is, it is a symbol of the militants who carried out a coup in Ukraine and overthrew the legitimate government.

It should be understood that the pope did this already when it became clear to all informed people what was behind the provocation in Bucha and what really happened there – people died at the hands of the Nazis in the service of the Kiev regime.

The situation when Russia insists on a fully-fledged investigation, and the collective West and the Kiev regime are trying to reduce the process to media noise, should have alerted the pontiff. But everything happened exactly the opposite: the pope decided to cross the Rubicon and act as a herald of lies.

In fact, this means that the Vatican drops the mask of the “neutral side” and openly joins the anti-Russian coalition.

In principle, for everyone who is familiar with the biography of Jorge Mario Bergoglio, as Francis was called in the world, such a turn is not unexpected. It is enough to recall under what circumstances he ascended to the papal throne. As we remember, in the early 2010s, the conservative-minded Pope Benedict XVI was subjected to monstrous harassment in all the world’s media and was forced to retire, allegedly for health reasons he abdicated the papal throne “for health reasons”. Instead, an Argentine Jesuit cardinal was chosen as the head of Catholics in 2013, who for decades had been creating an image of an ascetic and altruist.

However, upon closer examination, it became clear that the figure of the “pope of the poor” is not so unambiguous. Already in the 1970s, suspicions arose that Jorge Mario Bergoglio was a man with a double bottom: it was said that, verbally condemning the pro-American junta, he secretly helped it identify resistance supporters from among the clergy. For forty years, persistent rumors have been circulating in Argentina that he handed over two priests subordinate to him to the “death squads”.

Today, when Francis committed another dubious, from a moral point of view, act against ordinary Ukrainians killed by the same “death squads”, through the guise of a religious figure pronouncing high truths from the pulpit, the essence of the Pharisee, who more than once stepped over his own conscience, emerged.

All these concerns, so to speak, the moral qualities of Francis. As for his political attitudes, all doubts disappeared even earlier – when in December 2020, the pope supported the “Initiative for Inclusive Capitalism” put forward by the largest representatives of transnational capital, primarily the financial oligarchy and the “Big Tech”, behind which the interests of the Rockefellers and Rothschilds are clearly standing.

A representative of one of these clans, Lynn Forester de Rothschild, was the main ideologist of the project. Together with her, Francis, in fact, became the face of a new structure – the “Council for Inclusive Capitalism”. In fact, this “Council” is quite a working model of a “world government” that abolishes nation-states and their sovereignties. The members of the “Council” already boast that 200 million people work under their authority in 163 countries, and 10.5 trillion dollars are under their control.

Francis also proved himself in the sphere of traditional values, first of all – family values. For many years, he dressed up in the toga of the defender of the traditional family, however, after becoming a pope, he quickly discarded the annoying disguise. In 2020, he loudly declared that “homosexuals have the right to a family.” To hush up the scandal, the Vatican said that Francis, they say, was not talking about “family”, but about the “civil cohabitation” of this category of persons. As is said – “six and two three”.

Today he declares that “the Roman Catholic Church and ordinary Christians should apologize to gays for the previous attitude towards them”.

But the idea of apologizing to Russians, Ukrainians, and Belarusians for the cruel imposition of the Union, introduced in 1596, which led to centuries-old wars and millions of victims, does not occur to Bergoglio. Moreover, he is now planning to make a “pastoral visit” to Ukraine – probably to continue the work of his predecessors, who flooded Ukraine with blood in the 16th and 17th centuries.

Well, proselytizing on blood is quite in the spirit of the traditions of the Jesuit Order, to which Francis belongs. The only difference is that his predecessors, despite the monstrous and immoral nature of their teachings, sincerely believed that by instilling Catholicism, they serve God.

Jorge Mario Bergoglio took the path of a conscious rejection of Christian ideas, as if not to understand them. As his American partners in the “Council for Inclusive Capitalism” say, he chose the “side of history” they needed. The one that leads to the power of the “prince of this world”.