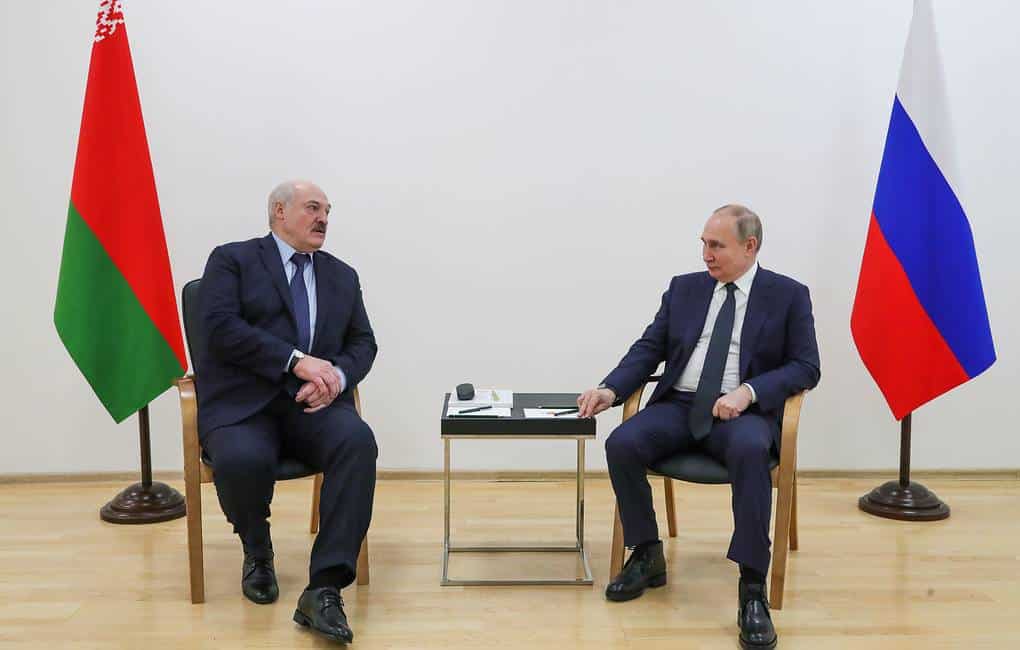 VOSTOCHNY SPACEPORT /Amur Region/, April 12. /TASS/:  Russia’s military operation in Ukraine is proceeding according to a plan and will continue until all its initial goals are achieved, Russian President Vladimir Putin said on Tuesday, having arrived at the Vostochny spaceport together with his Belarusian counterpart Alexander Lukashenko.

That said, according to him, talks with Kiev have again hit a wall because the Ukrainian side moved away from the agreements reached at a meeting in Istanbul at the end of March.

The leaders of Russia and Belarus in Vostochny met the representatives of the rocket and space industry, held three-hour talks, and conducted a joint press conference. If Putin is returning to his usual schedule on Wednesday – he has a meeting on the development of the Arctic scheduled, – Lukashenko will also visit Vladivostok.

TASS gathered key statements made during the visit.

On the special operation

The Russian operation is proceeding according to a plan and will conclude when all its initial goals are achieved, Putin said. According to him, accelerating the operation may lead to losses, so Moscow will act “at a measured pace, as scheduled, according to the plan that was originally proposed by the General Staff.”

The president reiterated that Russia’s main goal is providing aid to Donbass residents and “the actions in Ukraine’s certain regions” were related only to the necessity to immobilize Ukrainian forces, destroy its military infrastructure and create the conditions for active combat in Donbass.

On talks with Kiev

The talks with Ukraine are complicated by the fact that Kiev moved away from the agreements reached in Istanbul at the end of March (then, for instance, Russia decided to decrease its military activity in the direction of Kiev and Chernigov), Putin said. He specified that he did not yet know all the details, since he received a report on the change of Ukraine’s stance on Monday.

The Russian leader also expressed his gratitude to Belarus “for the good organization of several rounds of talks on its territory” and noted that “the Belarusian venue is quite suitable for further contacts as well.” “Beginning a direct dialogue with the Ukrainian side in many ways became possible due to the personal effort of Belarusian President Alexander Lukashenko,” Putin stressed.

On the inevitability of the operation

Putin called the events in Ukraine a tragedy yet emphasized that the confrontation with the Kiev regime was inevitable. “There was simply no choice, it was only a matter of time when it will begin. That’s it.”

According to Lukashenko, if Russia “was just a little bit late” with launching the military operation in Ukraine, it would have attacked itself.

The situation in Bucha

Lukashenko called the events in Bucha a “psychological operation conducted by the British” in order to introduce new sanctions against Russia. He gave Putin documents related to these events.

The Western “sanctions blitzkrieg” against Russia fell through, Putin stressed. “The Russian economy and financial system are rather solid.” He asserted that the Russian economy would adjust to the new conditions and at the same time hoped that common sense would prevail in the West.

According to Lukashenko, the restrictions won’t make Moscow and Minsk change their policy. “No sanctions can bend or derail us.” Putin noted that the West does not understand that “under difficult conditions the people of Russia, Russian people, always stand together.”

Both presidents also asserted that the West won’t succeed in isolating Russia. The Russian leader noted that “in today’s world, it is completely impossible to fully isolate anyone,” while Russia is not going to seal itself off from the rest of the world.

The “anti-Russian hysteria” in Western countries “lets itself known, but time will settle everything,” Putin asserted. The price hikes of fuel and food products, and growing inflation will impact “internal political processes,” he explained.

That said, the Russian president agreed with the opinion that Washington is ready for a standoff with Moscow “until the last Ukrainian.” “In fact, this is exactly what it is.” According to him, in the modern world, one country cannot preserve its domination and the unipolar world that was shaped after the fall of the Soviet Union is beginning to break up.

In cooperation with Belarus

Russian-Belarusian cooperation is developing successfully and in the conditions of an “all-encompassing sanctions war” Moscow and Minsk should bolster their integration even more, Putin emphasized. He specified that the sides have already implemented the integration plans mapped out until the end of 2023 by more than 30%.

Russia preserves for Belarus “the most favorable prices for oil and gas” paid for in Russian rubles. According to Lukashenko, Minsk is quite satisfied with this payment method. “You know, everything that we produce we can sell here. This means we are fine with the Russian ruble.”

Putin noted that Moscow has always treated the Belarusians as brothers, without considering them “younger” siblings. Lukashenko explained that the Russian leader never used the expression “younger brothers.” “That’s my terminology,” he noted.

Russia, despite difficulties, will “consistently and firmly” implement its plans in the space sphere, including the implementation of the Moon program, Putin assured. This involves the launch of the Luna-25 spacecraft from the Vostochny spaceport this August.

Moscow will cooperate with Minsk on this: soon a law will be approved that will allow Belarusian citizens and companies to work in the restricted-access city of Tsiolkovsky (located near the spaceport) and as early as next year the first flight of a Belarusian cosmonaut may take place.

Responding to a question about whether Lukashenko himself may become the first Belarusian cosmonaut, the Belarusian president said: “I would like to. But I do have a person to send. So I will think about this matter.”.