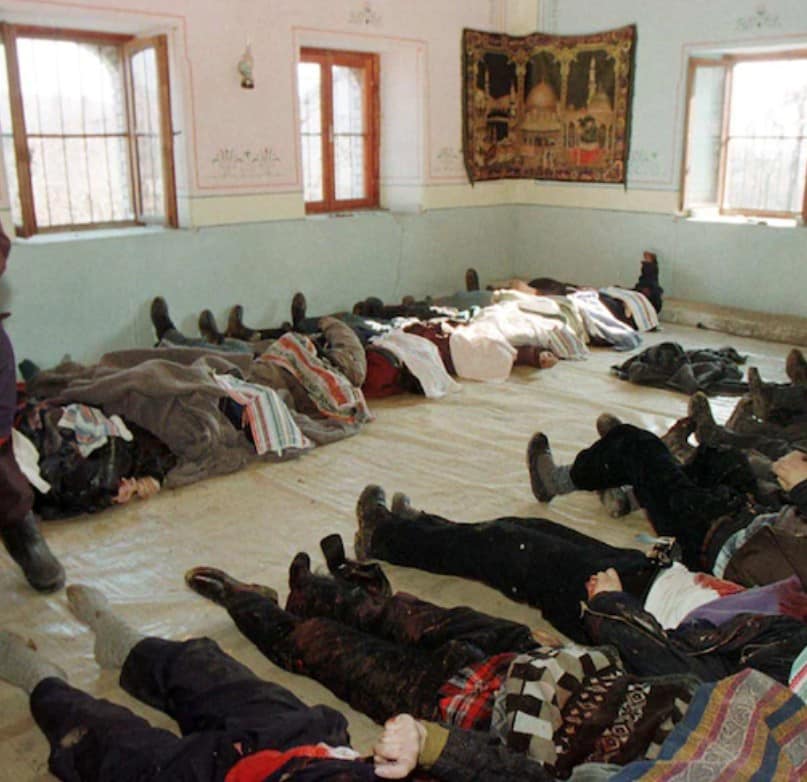 By Dragana Trifkovic for VT Damascus

We saw it in Serbia, we saw it in Syria, in Libya, in fact everywhere America goes to war…first they begin killing civilians and blaming others…its the new American way (British too)

Is it possible to negotiate with terrorists who are ready for anything? Different countries have different attitudes towards this question. In many cases, terrorists see the willingness to talk as a weakness that they want to take advantage of. What is certain is that terrorists never play fair games.

The world is in its greatest crisis since the end of World War II. The international system that was established as a result of negotiations between the victorious powers of the World War II has been shaken from the ground up. The years of the “Cold War”, which were characterized by the confrontation of two large blocs, from today’s perspective, seem like a period of peace.

The United States saw Gorbachev’s willingness to compromise and make concessions as its great victory in the Cold War. And was it really a victory? Can the deception of the opponent be considered a victory?

Western powers have promised that NATO will not expand to the East, if the Soviet Union agrees to compromises, in order to build a common democratic future through mutual cooperation.

Can democracy be turned into a weapon? Just like the media.

When the German group Scorpions released the hit “Wind of change”, which became world-famous, no one could yet clearly predict what a bright future it offered.

In the former Yugoslavia, the euphoria did not last long, because the disintegration of the country, which was followed by military conflicts, had already begun.

All Western media blamed the Serbs for the difficult situation in which we found ourselves and the alleged Greater Serbia pretensions. Completely irrational, as if only one side can be blamed in a military conflict. To make matters worse, the Serbs actually defended the common State of Yugoslavia, to the creation of which they brought their great victory and great sacrifice.

The media relentlessly reported on alleged Serbian crimes against civilians. As the culmination of that media hysteria, in 1999, Racak happened. The whole world was buzzing about what happened in a remote village in Kosovo and Metohija, which for years was the center of terrorist activities of the illegal organization Kosovo Liberation Army (KLA).

After that meeting, the CIA intensified cooperation with this terrorist organization, which had separatist goals based on ethnic nationalism (separation of the southern Serbian province of Kosovo and Metohija).

What really happened in the village of Racak and why is this case so important for the interpretation of the events in the Ukrainian town of Bucha?

On the night between January 14 and 15, 1999, Serbian security forces launched an operation against members of the KLA terrorist organization in the village of Racak.

These terrorist forces have been carrying out constant attacks such as killing police officers, abduction and torture of Albanians and Roma who refused to cooperate with the KLA.

All the conditions have been created for directing the play, which will then serve as an argument for NATO’s military aggression against Serbia (former Yugoslavia).

The bodies of KLA fighters killed in the clash with the Serbian police were brought to a ravine, i.e., to a designated location. The killed terrorists, who were in KLA uniforms, were disguised in civilian clothes. EU observers with AP and Reuters television crews also arrived at the scene.

They all filmed a sad procession led by William Walker, which was passing through the ravine in which bodies were scattered all around.

The investigation was not carried out, the investigation did not even begin, and the American diplomat William Walker accused the Serbs in front of the world media of killing 45 innocent Albanian civilians in the village of Racak, calling it a “brutal massacre”.

The Western media did not even want to listen to the other side, but launched an orchestrated media attack, which in fact participated in fabricating lies, creating a “suitable” atmosphere for the NATO intervention.

Twenty-three years later, looking at the reports of the Western media from Bucha, the same directors and the same scenography are clearly recognizable.

Russian troops left Bucha in the Kiev region on March 30, after the Russian leadership announced at the Russia-Ukraine peace talks in Istanbul that it would reduce military activities in the Kiev and Chernihiv regions, in order to gradually de-escalate the conflict.

On March 31, the mayor of Bucha, Anatoliy Fedoruk, addressed the public with a video message saying that he was very happy because the town was vacated and that there were no more Russian soldiers in it. In his video address, he did not mention any terrible destruction or dead civilians lying on the streets of Bucha.

On April 2, Ukrainian special forces released a video and a statement that Bucha was being “cleansed” without mentioning any civilian casualties or bodies on the streets but reported “actions against saboteurs and those who cooperated with the Russian army.”

Earlier, the Ukrainian army published videos of deserted streets of Bucha on social networks. Everything changed on April 3, when dead bodies appeared on the streets of Bucha with their hands tied behind their backs, and all Western media blamed Russia for the alleged massacre in Bucha and war crimes.

At the same time, the Ukrainian leadership stated for the American television that it was a “genocide” and a destruction of a nation, demanding a reaction from the West and even tougher sanctions against Russia.

We will remind you that NATO started bombing Serbian cities in 1999 after media accusations of the alleged massacre of civilians in the village of Racak, with the explanation that they must prevent “genocide” against the Albanian population. As a result of the NATO bombing, more than 250,000 Serbs were expelled from Kosovo and Metohija.

Russia immediately denied the accusations about Bucha and requested an urgent session of the UN Security Council during which evidence would be presented, but Great Britain blocked it.

Racak and Bucha are obvious examples of very similar false flag operations organized for propaganda purposes in order to create excuses for political and military escalation. They are not unique examples but part of a whole spectrum of false flag operations organized in many parts of the world from the Balkans to the Middle East in recent decades.

Only a few days after Bucha, Kramatorsk happened, which is very reminiscent of Markale scenario.

What can be concluded is that the Western powers do not intend to stop provocations against Russia, with which they are in conflict in Ukraine, and that they will continue to incite and arm Ukraine through which they are waging a proxy war with Russia. This means that the peace talks that Russia is conducting with Ukraine are doomed in advance, because the Western powers do not want a truce, but an escalation of the conflict.

The doctrine of the Russophobe Zbigniew Brzezinski, who left a vow in his will to America to separate Ukraine from Russia at all costs, contributed to this in many ways. This doctrine, which is guided by American foreign policy, is also the reason why the United States has been training and arming Ukraine for a war against Russia for years. With all these facts, it is difficult to call on the West to be rational, but if the United States does not change such a course of action, the world is in great danger.