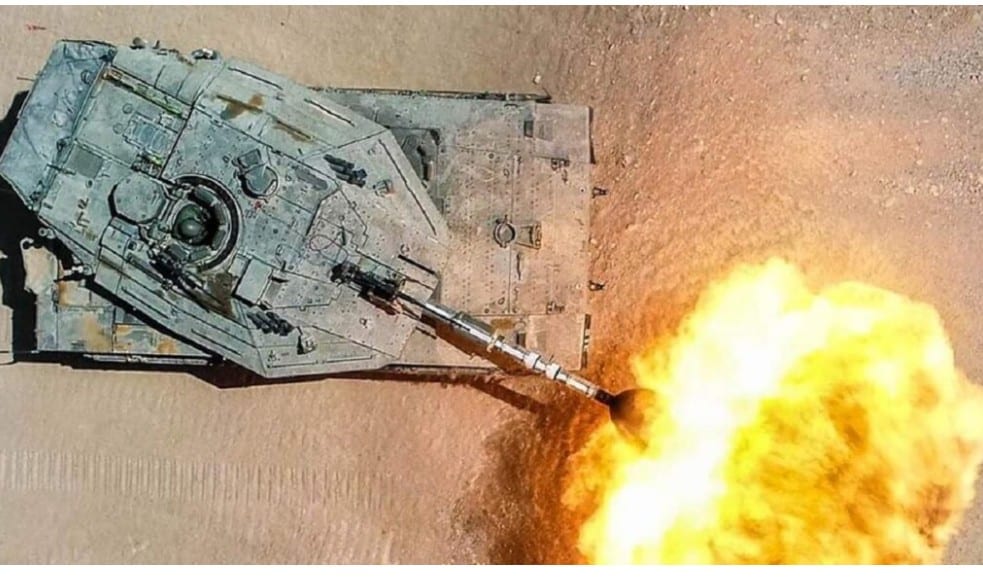 To Fulfill Deal With Moscow, Israel Restricts Arms Exports to Ukraine – On April 6, Ukrainian ambassador to Israel Yevgen Korniychuk stormed out of a briefing by Israeli defense and foreign ministers Benny Gantz and Yair Lapid.

Korniychuk fumed to Times of Israel: “Listen, if on the 42nd day of the war, with the bloodshed and massacre that Russia has been doing against innocent Ukrainian people, you are still calling this a ‘conflict’, there is really nothing to talk about… Israel is having a unique position from the rest of the Western world. This is the only country that behaves like that.”

The Israeli government has expressed sympathy for Ukraine, reluctantly voted to condemn Russia’s invasion in the UN after first refusing to co-sponsor said condemnation, dispatched over 100 tons of medical supplies and cold weather gear to Ukraine, and has set up a field hospital near Lviv.

But in terms of foreign policy, it still refuses to hold Russia culpable for the war, as if the missile and artillery strikes across Ukraine and the civilians shot in the back of the head and scattered across the streets of Kyiv’s suburbs were the results of some freak Black Sea tsunami.

It’s not just about symbolic condemnations, nor the refusal to adhere to sanctions imposed on Russia by the U.S. and Europe. Israel has not only denied requests for defenses from Ukraine, but used political influence and exercised end-user licenses to forbid the U.S. and Baltic states from donating Israeli-built weapons to Kyiv.

Israeli Prime Minister Naftali Bennett has sought to present Israel’s neutral stance on Russia and Ukraine as enabling a role as mediator and peacemaker. On March 5, he flew to Moscow for a three-hour meeting with Putin, then spoke twice on the phone with Ukrainian president Volodymr Zelensky, who has stated more than once he would find Israel an acceptable neutral ground for peace in-person peace negotiations.

However, Ukrainian sources afterward claimed Bennet merely served as a glorified messenger between Putin and Zelensky, failing to propose any solutions of his own. A Ukrainian official further alleged Bennett told Zelensky “If I were you, I would think about the lives of my people and take [Putin’s] offer” for a settlement.

Bennett’s office denies the exchange took place or that Putin had spelled out any such offer.

Zelensky, who is Jewish, nonetheless addressed the Knesset seeking to sway legislator’s opinion—though only after overcoming objections that the legislative house was scheduled for renovations. He had already reportedly offered to recognize Jerusalem as the capital of Israel in exchange for Israel dropping the export ban.

But Bennett undoubtedly believes a fence-sitting stance is necessary to maintain a quid pro quo with Moscow—one allowing Israeli warplanes to bombard Iranian and Hezbollah forces in Syria unhindered by Russian air defenses based there.

Between the 1950s and 1990, Moscow was the chief supplier of advanced arms to hostile regimes in Egypt and Syria. Soviet military personnel even directly combatted Israeli pilots in the air and targeted Scud missile strikes on Israeli troops. However, the dissolution of the Soviet Union reset the relationship and opened a floodgate of Russian immigration to Israel.

By then the Camp David accords had flipped Egypt into becoming a U.S. client state, but an increasingly isolated Syria, and to a lesser extent Iran, still looked to Moscow for arms. Israeli diplomacy was thus oriented towards discouraging Moscow from supplying these states weapons like the S-300 air defense system or Kornet anti-tank missile which could threaten IDF forces combating Palestinian militant groups.

In exchange for Russia cutting S-300 sales to Iran, between, 2009-2015 Israeli firms sold over $800 million in surveillance drones to Russia between 2009-2015 (see table). Until then, Russia lacked effective, modern surveillance drones. A license-production deal for Israel Aerospace Industry’s Searcher II drone taught Russia how to make them. These were the largest purchases of foreign arms by Moscow since World War II.

Russia’s extensive use of Forposts to support its bombing campaign in Syria (as well as Putin’s intervention in eastern Ukraine) led to criticism compelling Israel to discontinue sales. Russia is now using a domestic Forpost-R variant to execute missile strikes in Ukraine.

Russia’s military presence supporting the Assad regime in Syria also posed a risk of clashes with Israel, as the Israeli Air Force was (and remains) engaged in a decade-long bombing campaign targeting Iranian and Hezbollah assets in Syria, as well as Assad’s air defenses. Indeed in September 2018, a Russian Il-20M surveillance plane was mistakenly shot down by Syrian air defenses firing ineffectually at Israeli aircraft, killing all 15 crew.

Russia retaliated by supplying S-300s to Syria—but they never ended up posing a threat to Israeli airstrikes, as Israel and Russia struck an agreement: Russia would allow the Israelis free reign to bomb targets in Syria as long as the IDF gave the Russians advance warning and ensured no Russian forces were present.

In 2019, Israel arrived at another deal with Moscow—agreeing not to sell arms to Georgia and Ukraine as long as Russia banned military exports to Iran.

The current conflict has made Russia and Israel allies of convenience on another matter: both seek to derail rocky negotiations to resurrect the U.S. nuclear deal with Iran killed by the Trump administration. Israel and its Gulf State allies see the deal as too favorable to Iran, while Russia is trying to hold the deal hostage unless an exemption for unsanctioned Russia-Iran trade is made.

After clashes with invading Russian troops in 2014-2015, Kyiv sought to fill gaps in its military capabilities it could not rectify through its own military industry, at least not without years of expensive research and development. Those gaps included long-distance precision strike weapons; modern air defenses, given Russia’s huge advantage in air power and tactical ballistic and cruise missiles; and armed drones.

This last item Ukraine could acquire from Turkey. But air defense was another matter.

The Ukrainian city of Mariupol sought to purchase Israel’s Iron Dome air defense system, optimized for defeating unguided rocket artillery, which Israel employed successfully in the 2021 Gaza war as well as prior conflicts. Mariupol had been struck by a Russian rocket barrage that killed 30 civilians in January 2015. Zelensky also explicitly requested Iron Dome in his speech to the Knesset in March 2022.

There are admittedly practical problems with a Ukrainian Iron Dome. The system is likely too expensive for Kyiv, and would be quickly exhausted by the massive barrages Russian rocket artillery battalions can generate. Iron Dome batteries could only provide local defense of a few areas in Ukraine, and wouldn’t be very effective against Russian ballistic missiles.

Supposedly these factors explained Israel’s refusal of Ukrainian requests to purchase Iron Dome. But Israel had struck agreements to potentially sell Iron Dome to Azerbaijan, India and Romania in the past.

In February, Israeli political pressure reportedly killed a proposed amendment to the U.S. 2022 defense budget calling on Washington to study supplying its two Iron Dome batteries (which U.S. Army did not really want to keep) and Patriot air defense systems to Ukraine.

Nadav Eyal of Ynet News writes: “This placed Israel in a complicated position. It could refuse the U.S. request to supply Ukraine with the technology, or risk confrontation with Russia. Israel informed the administration in unofficial talks, that it could not agree to such a move given its relationship with Moscow… Washington was convinced by Israel’s arguments and the possible sale was taken off the table.”

Another Israeli system of interest to Ukraine was the Spike anti-tank guided missile. Not only was the Spike an effective tank buster—one of Ukraine’s top defensive needs—but some variants could strike targets at very long distances and be used  like a kamikaze drone of sorts. That ability could have been used to locate and destroy artillery bombarding Ukrainian cities.

But in February 2022, Israel issued an “almost unheard of” preemptive refusal to the Baltic States—all of which use Spike missile variants—blocking any requests to transfer their Spikes to Ukraine.

Another notable Israeli defense product is the Pegasus phone hacking spyware which has been used by clients to spy on (and often persecute) journalists and activists. But Ukraine’s request for Pegasus was reportedly denied in 2019 so as not to ruffle Moscow’s feathers.

Israel’s position on the Russian invasion arises from pragmatic calculation: the Bennet administration sees little benefit to condemning and punishing Russia’s unprovoked invasion, and much to lose. Bennett doesn’t want to endanger Israeli strikes on Syria, or give Moscow reason to sell arms to archenemy Iran.

The backlash for neutrality may be slight. Afterall, European orders of Israeli arms are expected to increase in Europe (unless blocked for political reasons) following Russia’s actions.

That said, revelations of Russian atrocities in Ukraine may increase divisions within the Bennett administration. Foreign Minister Yair Lapid stated Russia was responsible for the murder of civilians while Finance Minister Avigdor Lieberman refused to accord blame. But that doesn’t signal a shift in the Bennett administration’s stance broadly, yet.

Curiously, Zelensky himself stated in a speech on April 5 he believed post-war Ukraine was bound to become more like a “Big Israel”, a heavily militarized democracy under seemingly permanent threat from a hostile neighbor.

Sébastien Roblin writes on the technical, historical, and political aspects of international security and conflict for publications including The National Interest, NBC News, Forbes.com, War is Boring and 19FortyFive, where he is Defense-in-Depth editor. He holds a Master’s degree from Georgetown University and served with the Peace Corps in China.  You can follow his articles on Twitter.

Sebastien Roblin writes on the technical, historical, and political aspects of international security and conflict for publications including the 19FortyFive, The National Interest, NBC News, Forbes.com, and War is Boring. He holds a Master’s degree from Georgetown University and served with the Peace Corps in China.