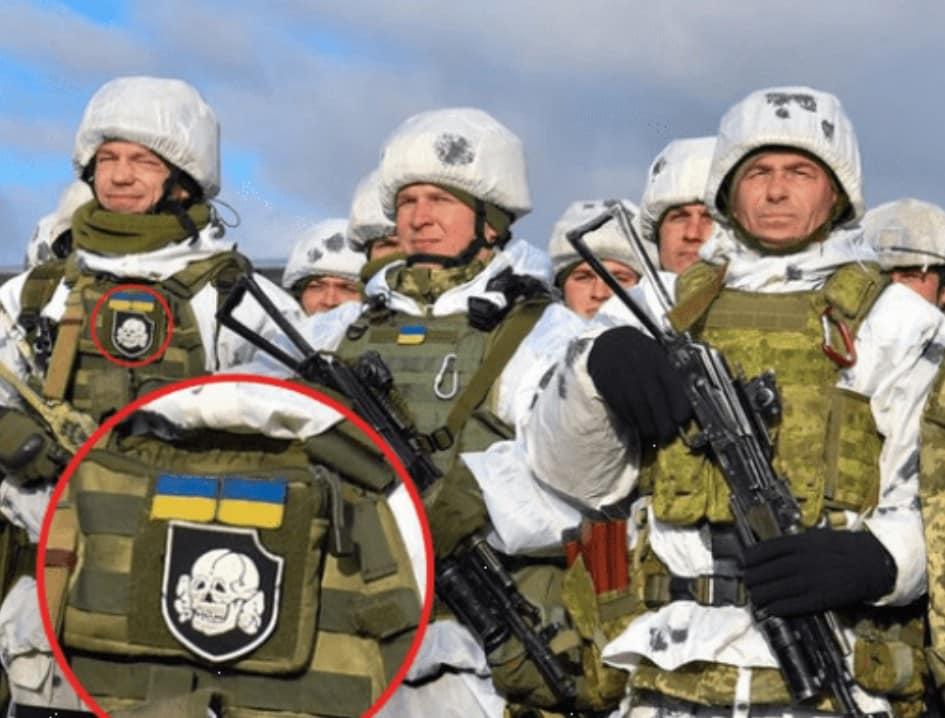 Anti-spiegel.ru – Those who stand up for the Ukrainian government in the West usually have no idea who they are defending and against whom Russia is taking action.

Western politicians and the media are overdoing themselves with declarations of solidarity and promises of help for the Ukrainian government. And tens of thousands have taken to the streets to demonstrate against the Russian military operation in Ukraine. Would they do the same if they knew who Russia was targeting in Ukraine? I want to show you that with a few examples as a reminder and ask you to check the links as well, because I didn’t make it all up. 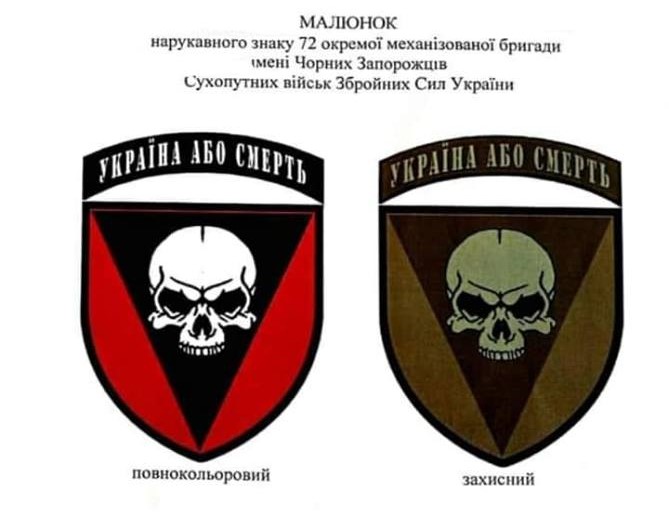 In November 2018, euronews reported on summer camps in Ukraine. In my article I wrote about this , among other things:

“In Ukraine there are summer camps for children, where children as young as eight are being trained to fire a Kalashnikov to kill Russians. Euronews read: “Your instructor: Yuri Cherkashin, a veteran soldier who fought separatists in Russian-speaking eastern Ukraine: “We never target people, ever. But we don’t consider separatists and occupiers coming from Moscow as human beings. That’s why you can and should shoot them.”

The translation is friendly, the Ukrainian original, which was also shown yesterday on Russian television, actually says that Russians are “subhuman”. It goes on to say: “Children’s camps run by right-wing extremist groups even receive state funding.”

SS symbols in the Ukrainian army

In December 2018, I reported on how the then President of Ukraine visited his army, which is now generously supplied with weapons from the West. The German media likes to keep quiet about the fact that the soldiers in this army like to use Nazi and SS symbols.

In Ukraine, which the West is currently fervently supporting, dissidents live dangerously. In May 2020 I reported on the fate of 13 murdered opposition figures and journalists critical of the government in Ukraine. The photo shows 13 murdered people.

In July 2019, unknown persons also fired a grenade launcher at an opposition television station in Kyiv.

Traditionally, each year Russia introduces a resolution to the UN titled ” To Combat the Glorification of Nazism, Neo-Nazism and Other Practices That Have Escalated Contemporary Forms of Racism, Racial Discrimination, Xenophobia and Related Intolerance.” contribute ” carries. It recommends that all UN member states, in accordance with their international human rights obligations, take the necessary measures to revise the results of World War II and deny the crimes against humanity and war crimes committed during World War II, to prevent and eradicate all forms of racial discrimination.

In 2020, 130 states voted for the resolution, and 51 states – including Germany – abstained from voting. These were primarily the states of NATO, the EU, the US allies in Asia and North America, and a few other small states. And two states rejected the resolution against the glorification of Nazism and racism: Ukraine and the USA.

In 2021, 130 states voted for the resolution again, and 49 states – including Germany again – abstained from voting. Again, these were primarily the states of NATO, the EU, and the US allies in Asia and North America, and a few other small states. And again two states rejected the resolution against the glorification of Nazism and racism: Ukraine and the USA.

The national hero of the new Ukraine is Stefan Bandera, who served in the Waffen SS during World War II and was involved in mass shootings and other crimes against humanity. In Ukraine, the Hitler salute is shown openly, torch marches take place that we only know from films from the 1930s, and the national salute is “Heil Ukraine, Heil den Helden!”

I have to explain that, because the German media always translates it with “Glory to Ukraine, glory to the heroes!” That sounds harmless, of course. That’s not even wrong, because the old Slavic word “Slava” in question means “honor” or “fame”, the Google translator also throws out “celebrity”, “reputation” and “reputation”. So it is a difficult word to translate with many meanings, which can be a homage, a greeting, or a congratulation.

The problem is that there is also an old German word that had these meanings. It is the word “Heil”, which has been disreputable since the Nazi era. Just like “Slava”, it is a very old word that dates back to Germanic languages ​​and is therefore also found in English as “Hail”. In Shakespeare, for example, one could read “All hail, Macbeth!”, which used to be translated as “Hail, Macbeth!”

The Latin greeting “Ave Caesar!” used to be translated as “Hail, Caesar!” In the imperial era there were songs in which one could hear “Heil Meine Kaiser”. Many formulations that are still used today, such as “Ski heil” or “Petri heil” go back to it. “Heil” was once a common word.

But history is what it is and the Nazis existed, which is why the German word “Heil” should rightly not be used anymore. In Slavic countries, people are well aware of the meaning of the word “Slava”, but it was also used in the Soviet Union, for example, when wishing “Slava” for communism. And the Soviet Union was not suspected of having been a Nazi state.

So the crux of the matter is the question in which context the word ‘Slava’ is used to understand whether to translate it as ‘glory’ or ‘honor’, or as ‘salvation’.

In Ukraine, the said slogan “Slava Ukraine! Gerojam Slava!’ (‘Hail to Ukraine, hail to the heroes!’) has become something of an official salutation of the ‘new state’ after the Maidan, and Ukrainian politicians often end their speeches with this phrase. The problem with this is that the wording goes back to the Ukrainian nationalists, who used the word in torch marches in the same way the Nazis used the word “Heil” from 1933 to 1945. At the end of this article, I show some video examples.

On May 18, the President of Ukraine brought the law on “native peoples” into parliament, which has since been adopted. According to this law, the citizens of Ukraine are divided into three categories based on ethnic criteria, which also have different rights.

The first category, of course, is ethnic Ukrainians. The second category is some small ethnic groups living in Crimea. So it seems reasonable to assume that they wouldn’t have gotten their own category if Crimea were still part of Ukraine. The classification of the Crimean peoples appears to be more of a “PR stunt” to remind Kyiv that Crimea is Ukrainian. The third category is all other minorities, ie Russians, Poles, Hungarians, Romanians and so on.

Various rights are associated with the law, for example, the opening of educational institutions in one’s own language (which category three is not permitted) and, above all, financial support from the state. The point behind this law is to put pressure on the minorities to forcibly Ukraine them.

In addition, a language law was introduced in Ukraine in 2019, which the Anti-Spiegel has reported on several times. The language law comes into force gradually and has the same meaning as the racial law: it is intended to forcibly Ukraine the minorities. Details of both laws can be found here.

UNHCR publishes two reports per year on the human rights situation in Ukraine. These reports have harshly criticized Ukraine since 2014 when it became democratic in the eyes of Western media and politicians after the Maidan. UNHCR criticizes everything I have already said here. There is also criticism that the crimes of the Maidan period (deadly shots in the Maidan and the Odessa tragedy) have not yet been solved.

The situation of minorities in Ukraine is criticized, regardless of whether it is about ethnic or sexual minorities, or about political dissidents, or even journalists critical of the government. They all live dangerously in today’s Ukraine. And that’s not what the evil Russian propaganda is saying, that’s what the UNHCR is saying.

The German media has been hiding all of this since Maidan 2014. Der Spiegel recently wrote about the Russian goal of denazifying Ukraine (emphasis as in the original):

“Of the many propaganda tales that Putin and his regime dish out to their own citizens, the one about the supposedly necessary »denazification« of Ukraine is probably the worst. Facts were seldom twisted so insanely, even in the Soviet Union. Ukrainian President Volodymyr Zelenskyy, who is now being hunted by Putin’s captors, is Jewish .”

A strong argument for the Spiegel readers, because they don’t know anything about all the facts listed here. They don’t know about Ukrainian children learning in state-subsidized holiday camps, about shooting Russian “subhumans”, which are symbols worn by the Ukrainian army, they don’t know about political murders, language and racial laws, and all the other things that don’t only criticize Russia, but also the UNHCR.

And those who are taking to the streets in Germany these days in the belief that they are demonstrating against Putin’s evil attack and for the democratic Ukrainian government are actually demonstrating for a Nazi government and against the country that wants to de-Nazify Ukraine. The fact that Russia ultimately saw no other way than a military operation is not least due to the fact that the West has funded these Nazi governments with more than 50 billion since 2014 instead of taking action against them.

But the German who is now demonstrating against Putin knows just as little about that as he does about Ukraine voting against a resolution against National Socialism.