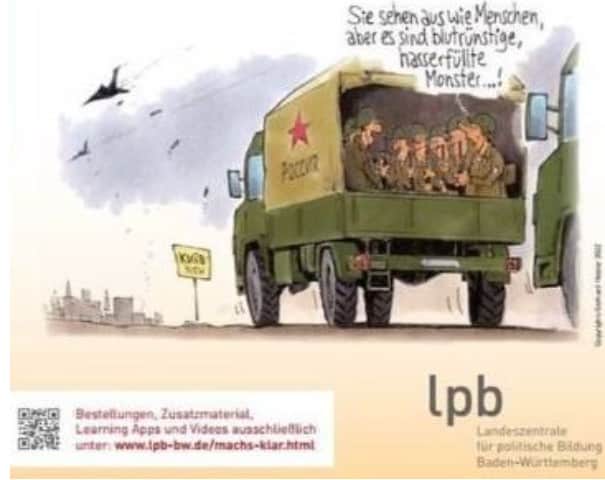 Anti-spiegel.ru – I already mentioned that roughly 80% of the German teachers are supporters of the Green Party. This is the party, which lied about the war in Yugoslavia and which – together with the Social Democrats – draws our military into this war. Joshua Fisher (real name Joshua Fishbein – another name stealer) the then Foreign Minister brought up the horrendous parallel between the happenings in Srebrenica and Auschwitz.

Joshua Fishbein was a hardcore (together with Cohn Bendit – another duo national name stealer) Maoist (“Rote Zellen and KGB”) from Frankfurt. He had no problem delightfully kicking members of the police in Frankfurt’s streets with a wooden batten.

In his memoirs, he wrote that his best international friend was Madelaine Albright and that it is necessary – as a politician – to take as much money from the German people and give it to others, who don’t matter, the only important is that the Germans don’t have it.

You may not believe it, but these are his own words.

In the meantime, the rest of the green crew was dumbed down to an extent that the only appropriate word for this is “debility or madness”.

As Joshua, the current Ministerpräsident is the Green Kretschmann also was a hardcore Maoist (see also UNO or NATO officials) before he changed his outward colors. I’m really tempted to call him an open Fascist now. His political actions in Baden-Württemberg during the pandemic are so deliberately hateful towards the people there and so unbelievable disgrace- and harmful to alleged Corona patients as well as others, one could only constantly smash him right into his really hateful and ugly face.

This politically turned down Baden-Württemberg now publishes such pure propaganda pamphlets to be worked within schools. I cannot describe my feelings when I first wrote it, but I also knew that this would sooner or later be produced by politicians in power, who I call mind terrorists.

Roughly 40% of all my teachers in primary school as well as in middle school and also later in the Gymnasium (Neumünster) were full-blown NAZIs.

People today cannot grasp this if they hear this for the first time.

And many, many young boys and girls have never in their lifetime heard
about this.

In Gymnasium, I was working for the school newspaper we produced. Some day, an article was published there speaking about the history of our School Director Riepen. When he was a teacher in Husum on the West coast of Schleswig-Holstein, he was very eager to work together with the Gestapo there and to give him names and addresses of Jewish people in Husum. Hell broke loose in our school!

Our informant was our own teacher in sociology and politics, Bodenstein. As the name suggests, he was Jewish and had just entered the school as a teacher. We all appreciated his very good and informative lessons, often managed with a parallel class into a discussion (also with the other teacher). Bodenstein learned this from his then very rare access to papers from the University of Leipzig (in the then DDR). We, redactors, had some rather conspiratory meetings with him before in his apartment in Flensburg. This was a big story ad it finally led to the resignation of the NAZI Riepen, but he was instantly ordered as the new Director of the new Bundeswehrfachschule nearby.

We were literally hunted, Riepen wanted to isolate us, but he had no chance – nobody told him anything, our mouths were shut when he did his interrogations in his office. This man was a real maniac, he was always shouting. He couldn’t sit on a chair, he always had to nervously walk around while shouting.

The interesting part of this case comes at the end. Riepen was a high-up in the Social-democratic party of Neumünster and well known.

Yes, these turncoats showed up and hid in all Parties at that time (the fifties & sixties). To get to the top, you had to be a member of the SPD in Neumünster and so he did right after the war.

Now, you can find this opportunistic and widespread behavior again all over the country. No one has learned anything from anything, they never bothered to even try this in their younger years.

The state center for political education in Baden-Württemberg has published a brochure for school lessons, which could also have come from Mr. Goebbels’ Reich Ministry of Propaganda.

One of the cores of Nazi propaganda of the 3rd Reich was that Russians (and other peoples) are not human and therefore can be killed. Children in German schools are now learning this again. The state center for political education in Baden-Württemberg has published a brochure for school lessons, which I will show almost without comment.

The children learn about Russian soldiers in the brochure:

“They look like humans, but they’re bloodthirsty hateful monsters…!”

This is an exact repetition of the Nazi propaganda of Herr Goebbels, who also denied that the opponents of the Third Reich were human. In Nazi propaganda films, Jews were shown and referred to as “rats”, and Slavs were shown and referred to as “sub-humans”. And exactly that, the dehumanization of people, is what children are now learning again in German schools.

It’s been normal in Ukraine since 2014, and now it’s moving to Germany and maybe other western countries as well. This is Nazi propaganda, brutal racism, and, as a result, the call for the blanket killing of Russians, which was also openly chanted before the Reichstag. It is precisely against this new and open form of Nazism that Russia has launched its military operation in Ukraine because one of Russia’s most important goals is the “denazification” of Ukraine.

In Germany, it is disputed that neo-Nazi governments have been running the country in Ukraine since the Maidan, although the Ukrainian ambassador in Germany gives interviews with formulations that could also have come from Hitler himself. This seems to be due to the fact that neo-Nazis have recently ruled in Germany too when they publish brochures with such content as teaching material for schools. By the way, the responsible Minister of Education is called Theresa Schopper and is from the Greens. This once again confirms a piece of wisdom from the post-war period that I didn’t want to believe until recently. It is:

Now the complete brochure that a Green has released for school lessons.

Addendum: As I can see from the comments, many readers think that I misunderstood the picture. Accordingly, the sentence is not meant for Russians but is put into the mouth of the Russians who supposedly think that way about Ukrainians.

I disagree, but I understand if it’s seen differently because the picture isn’t entirely clear. But that doesn’t really matter, because it doesn’t change the core statement that children shouldn’t be taught something like that in schools. One must not preach racial hatred in schools, no matter how it is packaged. And anyone who claims that Russians or Russian soldiers think that way about Ukrainians is either ignorant or lies knowingly.

On the Anti-Spiegel, I translated hundreds of reports from Russian media and you can see in all the Russian reports that while they are heavily critical of the Ukrainian government, they express sympathy for the Ukrainians who are under the governments that have ruled Ukraine since the Maidan, have to suffer and live.

In my new book ” Inside Corona – The Pandemic, the Network and the Backers – The Real Goals Behind Covid-19 “, I use extensive data analyses to show how the pandemic was prepared by various organizations in several phases, with the active preparation phase for example 2016/2017 began. In addition, the data also shows what overarching goals these organizers are pursuing and how the pandemic is paving the way for them to achieve those goals.

The book has just been published and can only be ordered here directly from JK Fischer Verlag.

SOURCEAnti-Spiegel.ru
ATTENTION READERS
Due to the nature of independent content, VT cannot guarantee content validity.
We ask you to Read Our Content Policy so a clear comprehension of VT's independent non-censored media is understood and given its proper place in the world of news, opinion and media.