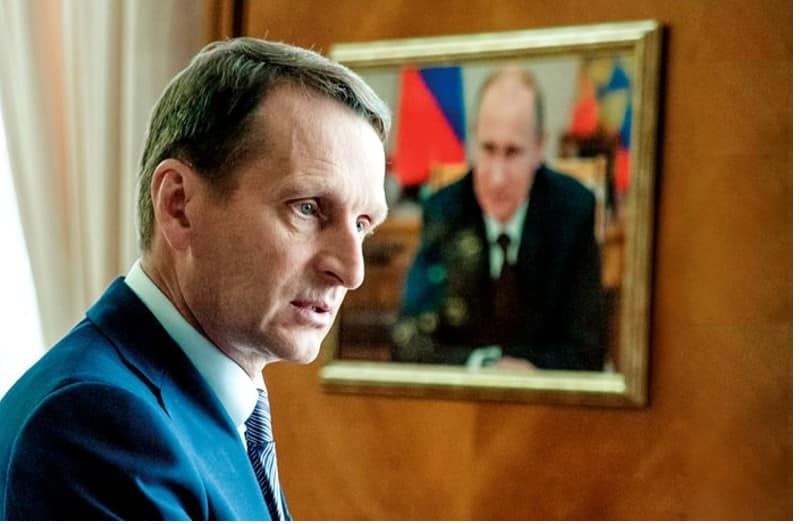 Sergey Naryshkin – Director of the Foreign Intelligence Service of the Russian Federation – April 13, 2022

The obsolete liberal universalism should be replaced by a new world order, just and stable.

The Russian special military operation was a moment of truth for the Russian world, firmly declaring its readiness to defend its right to an independent existence in the face of aggressive globalism, embodied in American hegemony, NATO expansion, the policy of “liberal interventionism” and LGBT propaganda. It has also become a point of no return for the “collective West,” which in its Russophobic fervor openly violates its own basic principles that have been declared for decades (or even centuries), such as the inviolability of private property, freedom of speech, or the unrestricted dissemination of information.

The bitterness of the confrontation makes it clear that there is much more at stake here than the fate of the Kiev regime. In fact, there is the architecture of the whole world order at stake. Based on the current situation, it is difficult to predict its specific contours, but it is safe to say that there will be no going back to the old ways.

The Russian special operation will definitely put an end to the attempts to turn Ukraine into a Russophobic puppet state that builds its identity on the basis of a manic denial and demonization of everything that objectively links it to Russia. No matter how much you ride, you cannot get away from yourself!

Especially since the U.S., as well as most other NATO members, are clearly not ready to go beyond providing the Kiev junta with moral and material support and openly engage in direct armed clashes on its side. At the current stage, Washington sees its main task as prolonging the conflict as much as possible, making it as costly as possible for both Moscow and Kiev and, at the same time, preventing the escalation from spreading further westward.

To this end, the most dastardly methods are used, up to and including sending armed fighters into Ukrainian territory, whose task is to organize and support a so-called guerrilla, but in fact a terrorist insurgency in the country. NATO, as U.S. “strategists” emphasize, should try to turn Ukraine “into a kind of Afghanistan. Anyone who is even slightly familiar with history and geography can see the utter irrelevance and strategic failure of such an analogy. However, one should not expect much from leaders who confuse Mariupol with Metropolis and consider Voronezh and Rostov-onDon to be Ukrainian cities! 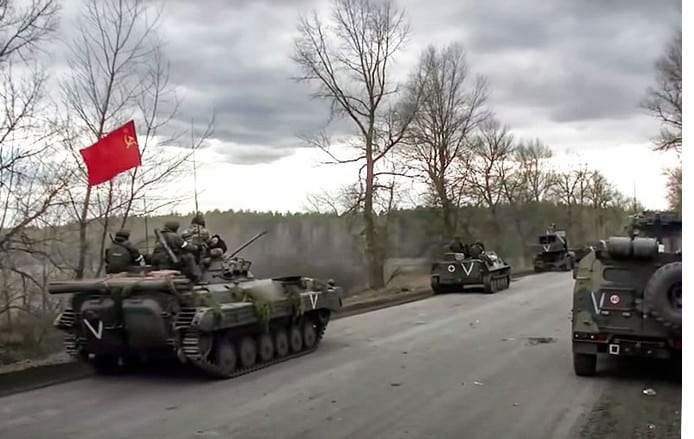 The Russian special operation will definitely put an end to attempts to turn Ukraine into a Russophobic puppet state that builds its identity on the basis of a manic denial and demonization of everything that objectively links it to Russia.

Having neither the strength nor the courage to challenge Russia openly and honestly, the West is trying to arrange an economic, informational and humanitarian blockade of our country, to create around it an atmosphere of “toxicity”, which would make it impossible to continue a normal life. Tactically, the mechanism of the “culture of cancellation” is used for this purpose, which has been practiced by American left-liberal elites on their rivals from the right camp, and now scaled up to the global level.

Everyone from Russian companies, banks, and media outlets to individual journalists, athletes, scientists, and artists is subjected to sanctions. The latter are punished only because they refuse to repeat mantras about the Russian “invasion” of Ukraine and betray their homeland. The degree of absurdity and hysteria is so over the top that even Russian cats, who are suspended from participating in foreign exhibitions, are under attack.

Russian cats, however, will survive even more than that, which cannot be said about European and American consumers. A comfortable, secure life, especially for the middle class, has for years been one of the pillars of political stability in Western countries.

Now, because of the “crusade” against Russia declared by Washington and its satellites, people in the U.S. and EU countries are faced with an unprecedented rise in fuel, energy and food prices. European citizens have already begun to be morally prepared for the prospect of food stamps and disconnection of batteries, which, it turns out, “can easily be replaced by sweaters. And all this under the pretext of helping the Ukrainian people, although the Ukrainians are neither warm nor cold from all these measures.

There is a persistent impression that Western elites are simply using the emerging situation to implement long nurtured plans for the de facto elimination of the middle class in the spirit of the famous scenario proposed by the Davos World Economic Forum: “By 2030 you will have nothing and you will be happy!

The Western propaganda machine is working quite well. Especially since alternative sources of information are either blocked or subjected to brutal pressure. Not only RT and Sputnik, which have a large audience, but also any, even small, media resources and structures that dare to oppose Western officialdom, such as New Eastern Outlook, the Catechon Analytical Center, and the Russian Institute for Strategic Studies, are shut down and put under sanctions.

A number of countries, such as Latvia, have already introduced administrative liability for viewing “illegal” content. In other words, the creators and supporters of Radio Liberty have reached the point of fighting against “illegal” decoders and satellite dishes!

Washington and Brussels like to speculate on the topic of “the prospects of confrontation between the refrigerator and the television set in Russia. However, an emptied “refrigerator” may prove to be much more dangerous for the Euro-Atlantic elite itself. We have yet to see the rise of a genuine civic consciousness in the West that turns its attention not to the mythical Russian threat, but to its own leaders, who force ordinary Europeans and Americans to pay for their geopolitical adventures and miscalculations out of their own pockets.

One can only welcome such an awakening, although it may not end with nationally oriented, sensible, realistic politicians coming to power in the US and European states, but with the establishment of a total and blatant liberal-Nazi dictatorship in the Western arena.

There is quite an interesting situation, somewhat reminiscent of the history of the late Soviet Union: the West, led by the U.S., is trying to impose throughout the world the ideological settings, in which it does not believe and which it constantly refutes by its own actions. As noted by the leading American expert on international politics F. Zakaria, the “empire” has overstretched its forces and is gradually turning into a “foolish hegemony” that cannot back up its messianic rhetoric with real steps. The crisis around Ukraine fully confirms this conclusion. 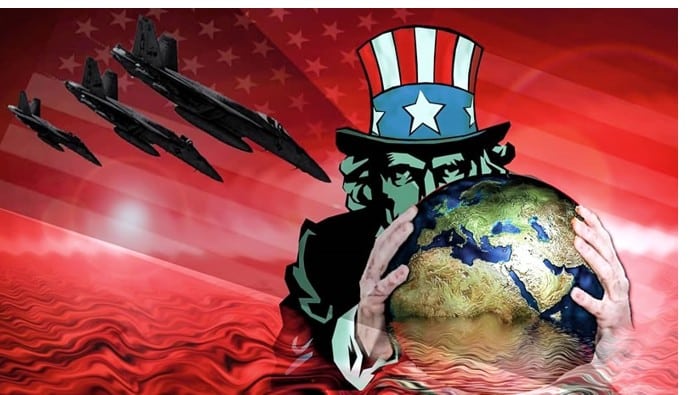 The desire to maintain the role of the world hegemon pushes the U.S. into dangerous military-political adventures.

Leaders of non-Western countries are closely watching the development of geopolitical confrontation in the European theater. All of them, including U.S. allies, are not averse to testing the weakening hegemon by expanding the boundaries of what is possible in foreign and domestic policy.

It is remarkable that the overwhelming majority of Asian, African and even Latin American countries have not joined the anti-Russian blockade. Moreover, their expressions of disloyalty to Washington are becoming more and more explicit and defiant. Saudi Crown Prince M. bin Salman refuses to increase oil production, rejects White House requests for negotiations, and publicly declares that he does not care about Biden’s opinion.

Pakistani Prime Minister I. Khan responds to calls from Western ambassadors to condemn Russia’s “invasion” of Ukraine: “We are not your slaves.” The leaders of Turkey, India, and the UAE are no less “impudent,” from the point of view of U.S. politicians. At the same time, the Americans themselves bitterly admit that they can no longer afford to talk to their partners “in the spirit of the Bush Jr. Sic transit gloria mundi – so goes the world’s glory!

At the moment, right before our eyes, a fundamentally new stage of European and world history is unfolding. Its essence is the collapse of the unipolar world and the system of international relations based on the right of the strongest, that is, the U.S., to destroy other states in order to prevent the slightest possibility of their transformation into alternative centers of power. These were the goals pursued in Yugoslavia, Afghanistan, Iraq, Libya, Syria. These were the goals of the West’s efforts to draw Ukraine into the orbit of its influence.

Russia is now openly challenging this system by creating a truly multipolar world, which has never been seen before and from which everyone, even our current opponents, will benefit in the long run.

If Europe and the U.S. lack the maturity and courage to move in this direction, other centers of power will have to design a global future without them. The obsolete liberal universalism must be replaced by a new world order that is just and stable. It must be created under the conditions and in the forms that will ensure the co-existence of states and regional associations, with each of them retaining the right to their own independent development. I am sure that those sensible forces in Western countries, who are aware of the risks facing the global community and are simply interested in self-preservation, will be increasingly drawn into this process.