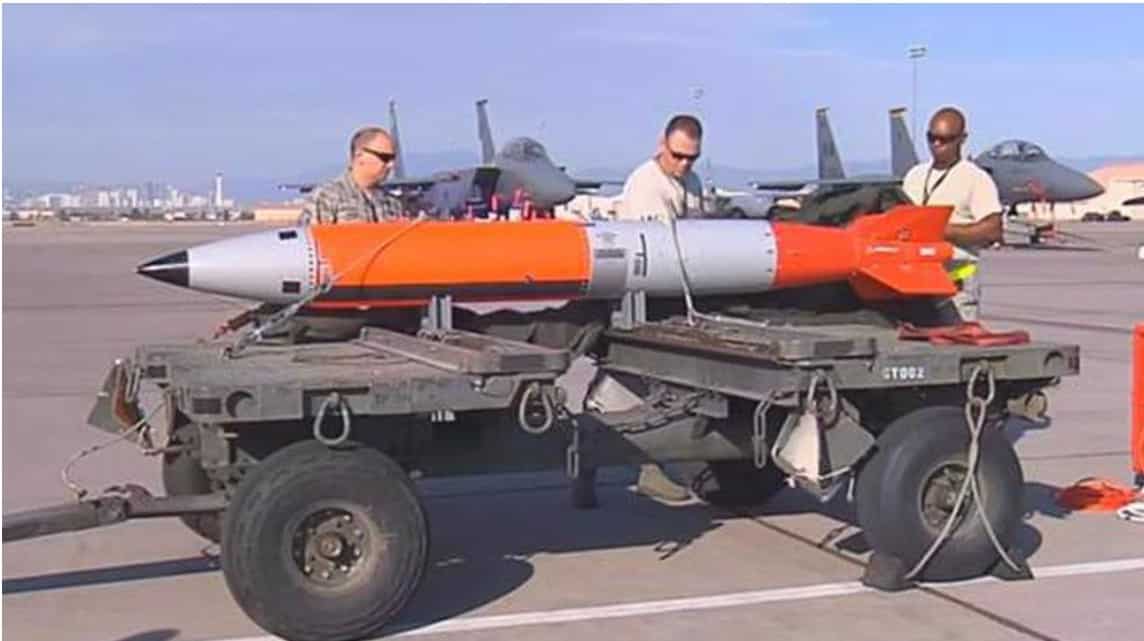 British underground military facilities are being upgraded for use in storing US nuclear weapons as part of an extensive nuclear arms modernization program pursued by Washington, US military budget documents show.

In the Biden administration’s 2023 military budget request, the UK was added to the list of countries where infrastructure investment is under way at “special weapons” storage sites, alongside Turkey, Belgium, Germany, Italy, and the Netherlands – all countries where the US stores an estimated 100 B61 atomic bombs, the UK-based The Guardian daily reported Tuesday.

The report cites Hans Kristensen, the director of the nuclear information project at the Federation of American Scientists (FAS), as saying that the British site being upgraded to host the nukes is the US airbase at RAF Lakenheath, located 100 kilometers northeast of London.

As part of the US nuclear arms modernization bid, the report says, “The B61 has been given a new lease of life with a guidance system, the B61-12 variant, due to go into full production in May.”

Washington’s 2023 budget request states that NATO “is wrapping up a 13-year, $384m infrastructure investment program at storage sites in Belgium, Germany, Italy, the Netherlands, the UK, and Turkey to upgrade security measures, communication systems, and facilities.”

This is while Britain has become anxious to assume a more assertive role when it comes to its own nuclear deterrent, according to the report, which noted that London announced last year that it would boost its own stockpile of Trident nuclear warheads by 40 percent to 260 – the first such increase since the end of the cold war.

It further cited British government sources as saying that the UK has “a clearer appreciation” of its role as a nuclear weapons state in a renewed era of state competition with Russia and China.

According to the daily, the British Defense Ministry did not comment on the upgrade mentioned in the US budget, though one official said, “We won’t provide anything on this as it relates to the storage of nuclear weapons.”

It then underlined that the development comes “just four months after the arrival in Lakenheath of the first of a new generation of nuclear-capable US combat aircraft, the F-35A Lightning II, the first such deployment in Europe.”

The report further cited Daryl Kimball, the executive director of the Arms Control Association, as saying that the upgrade of the British storage facilities is “an early sign that the US and NATO are preparing to engage in a protracted and maybe heightened standoff with Putin’s Russia.”

Russia has renewed its warning against further expansion of the NATO military alliance, saying the alliance remains “a tool of confrontation”.

“The administration should provide some clarity about the military necessity and goals of possibly bringing nuclear weapons back to the UK,” Kimball emphasized.

The developments in Europe are part of a broader retreat from arms control, the daily also noted, adding that the Biden administration’s nuclear posture review – which has been sent to Congress but not yet declassified – reportedly do not include the changes the US president pledged during his campaign.

In 2020, Biden claimed he would formally declare the sole purpose of nuclear weapons to be deterrence of a nuclear attack against the US or its allies. But the review leaves open the option of using nuclear arms to respond to non-nuclear threats as well.

However, the nuclear disarmament group CND said the “quiet announcement” by the US amounted to more militarization at a time of growing risk and would add to the risks faced by the British public. CND’s General Secretary Kate Hudson said she feared it could lead to US warheads being redeployed in Britain, insisting, “Nuclear weapons don’t make us safe – they make us a target.”

The US withdrew its B61 munitions from Lakenheath in 2008, marking the end of more than half a century of maintaining a US nuclear stockpile in Britain. At the time of the withdrawal, the gravity bombs were widely considered as militarily obsolete and hopes were higher for further disarmament by major holders of nuclear weapons.

In the 1990s, RAF Lakenheath had 33 underground storage vaults, where 110 B61 bombs were stored, according to the FAS. Since their withdrawal, the vaults have been dormant. Kristensen said he believed the vaults are now being upgraded so the new B61-12 bombs can be stored there.

According to Kristensen, when the new B61-12 bombs are delivered – expected next year – they will replace older models already there, noting that the Lakenheath upgrade is intended to provide more flexibility to move the nuclear weapons around Europe.

“One of the things they have talked about is protecting the deterrent against Russia’s improved cruise missiles capabilities,” Kristensen asserted. “So they could be trying to beef up the readiness of more sites without them necessarily receiving nukes, so that they have the options to move things around in a contingency if they need to.”