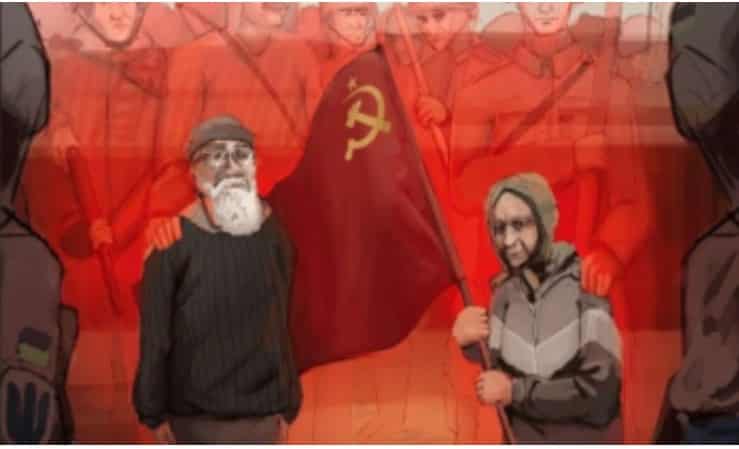 МОСКВА, 14 апреля 2022, Институт РУССТРАТ.
Well, what are you going to do? Time after time, in search of answers to important questions, you find formulations of different ideas of such bottomless depth that it even takes you aback.

Here is one of them: “A nation that does not know its past has no future.” The author is unknown. Someone thinks that this is a Russian scientist with a world name and the same scale of merit Mikhail Vasilyevich Lomonosov. And, although there is no documentary evidence of his authorship, you intuitively understand that this formulation could well belong to him.

Why do we need to know the history? Why leaf through the old, decrepit pages of chronicles and research? The fact is that the penetration into the historical depths allows one to understand the connection and the course of various events in the past. Who did it this way, and not otherwise, why, and for what reason did they make such decisions.

Of course, the perception of history depends on the position taken by each person in life. That is, from his worldview.

There is a video on the web where UAF troops mock an old woman who met them with the flag of the USSR. The soldier tramples the flag, and the grandmother reproaches him for it. At the end of the video , the UAF troops utter these words: “He trampled. Because they came to my house. I speak Russian with you… I am not a Banderist… And even if I was – what’s the difference. I’m fighting for my land. I didn’t come to them.”

Everything is very clear. But it just seems that way.

The questions of the opposing sides are often formulated in this form: “What are you doing on our land”. It may seem that in response, the other side should droop, reflect and retreat from the implementation of the plan.

In the case of Ukraine, this is not the case. The correct answer lies in the depths of centuries. And it is correct.

From time immemorial, Ukraine was divided along the banks of the Dnieper into left-bank and right-bank. The water barrier created by Mother Nature sometimes helped, sometimes complicated, in modern terms, the geopolitical division of the territory.

Occupying the left bank, the Cossack troops of the Zaporozhian Sich, led by Bogdan Khmelnitsky, have been asking for accession to Russia for several years. The reason for the Cossacks’ appeal for help is the constant struggle with the Polish-Lithuanian Commonwealth for freedom and independence. The Zaporozhian Sich was admitted to Russia in 1654. However, the exact date of the decisive moment in joining is somewhat blurred. It includes both 1653, the year of the convocation of the Zemsky Sobor, and 1667 as the end of the Russian-Polish war. In 1654, these were approximately the territories of the modern regions – Kirovograd and Dnepropetrovsk.

The right-bank part of Ukraine became part of the Empire in 1793 after the second partition of Poland during the reign of Ekaterina II. Before that, Turkish and Polish domination had to be eliminated. Within the current borders, these are 11 regions of the north-east and the centre of Ukraine.

After the February and October revolutions in Russia in 1917, the Ekaterinoslav, Poltava, Kherson and Kharkov provinces formed the autonomous Donetsk-Krivoy Rog Soviet Republic within Russia. It did not last long – until March 1918. But during this time, it tried to completely reunite with Russia. At that time, the Bolsheviks could not take such a step.

There was a time when there were three republics within the borders of modern Ukraine – the Ukrainian People’s Republic, the Donetsk-Krivoy Rog and Odessa Soviet Republics.

Later, the Soviet government established a single independent Ukrainian Soviet Socialist Republic (UkSSR). In 1920, it was “strengthened” by the Donetsk province transferred from the RSFSR. To be more precise, eight regions of the south-eastern part were transferred. It should be remembered that since the beginning of the formation of the USSR in 1922, Russians in Kharkov, Donetsk, Lugansk and adjacent regions have been subjected to the policy of Ukrainisation. Let’s leave the reason for this attitude outside the article.

In 1939 and 1945, four more regions in the west were annexed to the Ukrainian Soviet Socialist Republic.

In the spring of 1954, the Crimean region was transferred from the RSFSR to Ukraine.

A historical digression shows that the whole of modern Ukraine was formed by Russia. First Tsarist, then Soviet. The country was given everything – people, fertile lands, industry, economic ties, security. But the Kiev regime managed to trample all this into the mud.

And after that they have claims against us? We have come and are putting things in order on virtually our territory. In addition, we ensure the safety of both our own and the safety of the population subjected to genocide by the nazi authorities. That’s the story of geography.

Now the answer to the question is – what are we looking for there? There we seek truth and justice.

The issues that arose in ensuring comprehensive security required the launch of a special military operation in Ukraine. Other options have stopped working. The situation has gone beyond a reasonable solution. Now do not be offended and try to interfere with the process.

The troops of the Russian Federation, Donetsk and Lugansk People’s Republics continue actions aimed at the demilitarisation and denazification of the criminal Kiev regime.

Among the serious achievements over the past day is the capture of the enemy group at the Mariupol Ilyich plant with a number of 1026 people. This is the personnel of the 36th Marine Brigade. Among them are 162 officers, 47 women, 151 wounded. The wounded received primary medical care. Then they were sent to the Mariupol city hospital. Everything is exactly as the laws and customs of war require. This was announced by the official representative of the Ministry of Defence of the Russian Federation, Major General Igor Konashenkov.

The results of the work of the Russian Armed Forces over the past night were also presented.

Two large warehouses of rocket and artillery weapons of the Ukrainian troops were destroyed by high-precision sea- and air-based missiles in the areas of the settlements of Sadovoye and Chudnov. Four Ukrainian helicopters – two Mi-24 and two Mi-8 – were also destroyed at the Mirgorod military airfield.

Operational-tactical aviation of the Russian Aerospace Forces hit 46 military facilities of Ukraine. Among them: two control points and a radar station in the Borovoye area, two installations of multiple rocket launchers, as well as four areas of concentration of Ukrainian military equipment in the Borovoye and Peski-Radkovskoye areas.

Russian air defence means shot down two unmanned aerial vehicles in the air over the settlement of Afanasyevka.

In total, since the beginning of the special military operation, 130 aircraft, 103 helicopters, 244 anti-aircraft missile systems, 447 unmanned aerial vehicles, 2,169 tanks and other armoured combat vehicles, 243 multiple rocket launchers, 931 field artillery guns and mortars, as well as 2,076 units of special military vehicles have been destroyed.

The West, as always, does not want to recognise the genocide and racism adopted by the Kiev regime. However, there are stubborn facts that we know about and publicly talk about.

On April 12, 2022, the nazis fired more than a hundred 152, 122 and 120 mm shells at the DPR, and also used “Grad” MLRS. Eight settlements came under fire, in which 27 residential buildings and three objects of civil infrastructure were damaged. Donetsk and Yasinovataya are subjected to intense strikes. Two civilians were killed in Yasinovataya under the shelling of the Ukrainian nazis. Seven people were injured. In the LPR, the city of Irmino was hit by MLRS. One civilian was injured.

Information about the dead and injured civilians, torture and murder of prisoners, senseless destruction, provocations and the ongoing fanaticism of the Kiev junta is constantly being clarified and recorded.

According to the data of our Ministry of Defence, presented by the head of the National Defence Management Center of Russia Mikhail Mizintsev, civilians are being tortured in Slavyansk. Citizens “suspected of having pro-Russian views” are detained by the militants of the territorial defence, “taken away to an unknown direction, subjected to brutal torture, threatened with transfer to the SBU, as well as physical violence against relatives (murder, gang rape of wives and daughters), and also forced to equip strong points and checkpoints”. Many of the detainees do not return home.

According to the press service of the Investigative Committee of the Russian Federation, the bodies of four murdered Russian servicemen with traces of abuse and torture were found in one of the liberated areas. According to the experts, the injuries were sustained by them while they were alive.

Responding to the atrocities of the nazis, the military investigative bodies of the Investigative Committee of Russia opened criminal cases upon the facts of torture and torment of Russian servicemen. The cases were initiated on the grounds of a crime provided for in paragraphs “a”, “b”, “e”, “h”, “l”, “m” of Part 2 of Article 105 and Part 1 of Article 356 of the Criminal Code of the Russian Federation against unidentified (so far) persons participating in the armed conflict on the side of Ukraine.

Without a doubt, the truth will be established, justice will be restored, and the perpetrators of crimes will be found and punished. Given the gravity of the crimes committed, it is fair to resume the use of the highest measure of social protection.

That’s what we need to find and restore in Ukraine first of all – social justice and protection.