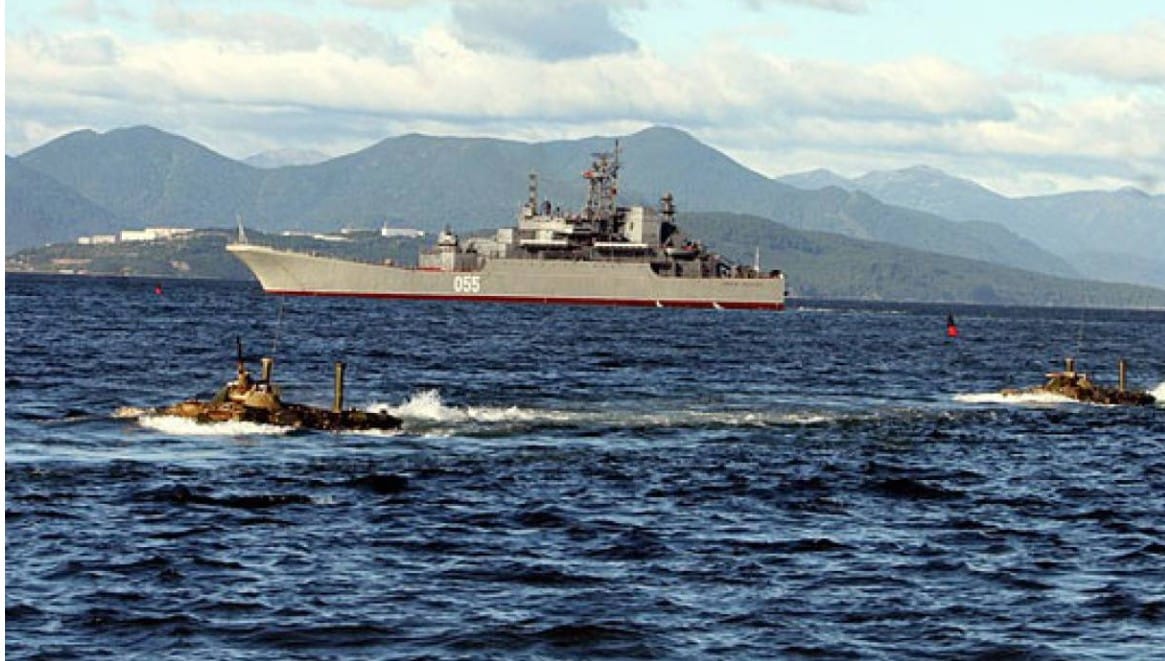 SVPressa: Akio Kawato, a former Japanese diplomat and now, reportedly, a visiting professor at the University of Tokyo and Waseda University, I know personally, although not closely. He worked at the Japanese embassy in Moscow, then was the ambassador to Uzbekistan and Tajikistan. He speaks Russian quite well and is considered one of the experts in our country in Japan.

Being a native of the Japanese Foreign Ministry, Kawato consistently takes a pro-government position on the “territorial problem”, that is, he believes that Russia has captured the “northern territories” and must “return” them, all at once.

At the same time, Kawato does not seem to be very upset by Moscow’s refusal to continue meaningless negotiations on the “peace treaty” that has long become an anachronism, through which Tokyo tried to revise the territorial results of the Second World War in its favor.

In a recent article in the American magazine  Newsweek (there is also a Japanese edition), Kawato criticizes the efforts of former Japanese Prime Minister Shinzo Abe, who supposedly sowed among the Russians “false hope that Japan will advance economic relations without resolving the territorial problem.” The criticism is unfair, because former Prime Minister Abe, at numerous meetings with V. Putin, did not hide his intention to use economic cooperation with Russia as a catalyst for negotiations on “solving the territorial problem” in favor of Japan.

What does the former diplomat in the embassy rank see as a prospect for continuing the struggle for the “northern territories”? It turns out that in the balance of forces of the military fleets of the two countries. He writes: “The sanctions have dealt a decisive blow. At the moment, Russian-Japanese relations are returning to the Cold War regime. But don’t bother. In the Far East, Russia does not have the same military power as in Soviet times. The Russian Pacific Fleet is only one-tenth (?!) of Japan’s Naval Self-Defense Forces .

It is not the first time that the Pacific Fleet will not cope with its tasks in the war with Japan for the Kuriles. And not only from the Japanese. This was stated, for example, by Doctor of Military Sciences Captain 1st Rank Konstantin Sivkov. True, this military specialist, popular in the media and on talk shows, talks about a situation where Japan will be supported by the US Navy. In one of the publications, Sivkov assured that the Pacific Fleet was not able to keep the southern Kuril Islands from being captured by Japan. He believes that in the event of a conflict between Moscow and Tokyo , “the losses of the Pacific Fleet can be from a third to two thirds, depending on the type of force, after which it will lose its importance as an operational-strategic association”. True, Sivkov admits that Tokyo’s expansion is impossible without the support of Washington, which is capable of sending up to three aircraft carrier strike groups and up to five nuclear submarines to the conflict region.

Sivkov admits that the main stage of the armed conflict will involve “an operational landing on the four disputed islands of the South Kuriles”, and at the same time the US Navy “will begin actions to isolate the area of ​​operations of the Japanese Navy from possible opposition from the Kamchatka group of the Russian Pacific Fleet.”

I do not presume to argue with the captain of the 1st rank on the combat capabilities of the Russian and Japanese fleets in the event of a collision. However, I would like to remind you that even with close military cooperation between the two countries and, apparently, joint planning of operations, the forces of the US Navy, under the agreement, are still placed within certain limits.

Thus, in the event of attempts by the Japanese “self-defense forces” to carry out an amphibious operation to seize the Kuril Islands, Washington has no obligation to Tokyo to participate in the seizure or to somehow support such a reckless sortie. Representatives of the American administration have already brought to the attention of their Japanese allies that the Kuril Islands are under the actual control of the Russian Federation and are not included in the zone of joint security of Japan. Unlike, for example, the Senkaku (Diaoyu) Islands, which are claimed by the PRC. Although it should be noted that there are many skeptics among the Japanese who doubt that the Americans will risk starting a big war with China for the sake of these uninhabited sea cliffs.

But back to Cavato’s verbal exercises. He offers, as they say, to play long. That is, to show patience and wait, as Japanese commentators write, for a new weakening of Russia, when it again needs a “rich Japan”.

The professor writes: “There is no statute of limitations on territorial disputes. If we raise a fuss, Russia will also become nervous, and this will be counterproductive. Therefore, it is enough to continue calmly putting forward our demands. It is also necessary to get away from the Japanese way of thinking – “in order to get along with Russia, it is necessary to abandon offensive territorial demands” . If Japan compromises on territories, Russia will not appreciate it anyway…

But Russia needs Japan, so it will definitely go for rapprochement. At the same time, our predecessors, back in Soviet times, made a lot of efforts to strengthen Russian-Japanese relations. For example, the development of natural gas and oil on Sakhalin, as well as plants and companies built by Japanese business in Russia. Nobody refused them…”

And here Kawato-san is right. In Soviet times, trade and economic cooperation between the two countries was really on the rise. In the 70s of the last century, Japan even shared the first or second place with the FRG among the partners of the USSR among the capitalist countries. However, for some reason, Cavato forgets to note that at that time the Soviet government resolutely rejected even attempts to present any territorial claims to our country. M. Gorbachev, B. Yeltsin and their entourage allowed themselves to do this, hoping to get a considerable jackpot in foreign currency for the Kuriles.

At the same time, it must be admitted that the frequent publications in the Japanese media about the “transfer of Russian troops to Ukraine from the Far East”, as a result of which the grouping of the Eastern Military District, numbering only 80 thousand military personnel, is weakening, and the forces of the Pacific Fleet do not exceed 20 large ships and 13 nuclear submarines , give rise to illusions among the Japanese about the possibility of opening a “second front” in the east in order to recapture the Kuriles by force.

Here is what, for example, Japanese readers of the Yomiuri Shimbun newspaper suggest, which devoted one of its recent articles to this topic.

Previously, Japan’s defensive forces were concentrated in Hokkaido, but later the focus shifted to the Nansei Islands due to the Chinese threat. Now that Russia has become a potential enemy due to a military special operation in Ukraine, it is better to reinforce tank units in Hokkaido again and deploy medium and long-range anti-ship missiles as a priority.

Japan must station its navy, including aircraft carriers, in the Pacific. It is also necessary to put the Air Force on alert in order to respond to signs of Russian troops moving south. In addition, it is necessary to choose routes of invasion into Russia in order to capture missile launchers.

It may be a show of force or a threat, but it doesn’t matter. Russia’s meager navy is not strong enough to invade Japan. The threat continues to be China and Article 9 of the Japanese Constitution.

Since Russia is Japan’s neighbor, it certainly poses a threat to our security. But if we consider the Russian economic and financial aspects, the invasion of Japan and Hokkaido after the special operation in Ukraine will not be easy to implement. I think Japan should seriously consider the possibility of attacking enemy bases and nuclear weapons.

The Ukrainian conflict will end after gaining independence in two eastern regions. Russia may invade Hokkaido. An attack on the Baltics or other NATO countries would mean an all-out war, so Russia will not go for it at this stage. If this happens in Hokkaido, then there’s a good chance the Biden administration won’t help us!

The trend of military exercises followed by a special operation shows that Japan should amend its security law as soon as possible. After the attack, it will be too late. The left forces, which usually call for peace, are powerless against a powerful country with which dialogue is impossible.

If Russia conducts exercises, while transferring troops to the European part, then this is nothing more than a simple threat. Ukraine hopes that the Siberian troops will remain in the Far East region and will not be used as a reserve force.

Russia may invade and annex Hokkaido in retaliation. Please do not endanger Japan by imposing too harsh sanctions against Russia, as Europe and the United States do. If it comes to a fight, we don’t know how prepared the US is to protect us. Ukraine is important, but the Japanese government should prioritize the defense of Japan.

Do you think the Russian Far East Fleet will be able to single-handedly defeat the Japanese naval forces? Or does he want to repeat the fate of the Baltic Fleet in the Battle of Tsushima? The Russian army stationed in the northern territories will not be able to defeat the northern units of the self-defense forces.

The self-defense forces also conduct exercises, but this is not enough. The enemy arranges provocations to make us nervous. And Japan behaves passively, limiting itself only to collecting information. We also need to take steps that Russia will not like. By the way, what happened to the Russian who swam to Japan last year?