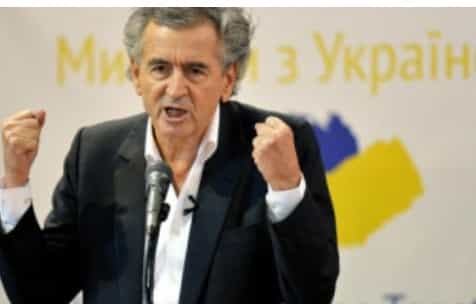 MOSCOW, 14 april 2022, RUSSTRAT Institute.
“Wherever the corpse is, there the vultures will gather”, says biblical wisdom. The French oligarch, associate of Soros and the “chief screenwriter of Maidan” Bernard-Henri Levy, aka BHL, has once again arrived in Ukraine.

The regularity of his visits recently can be compared with the persistence of Macron’s calls to Russian President Vladimir Putin. We can only guess whose fate the French president was so worried about. Some publications have suggested that Emmanuel was worried about the life of BHL, allegedly stuck on the territory of “Azovstal” in Mariupol, along with Ukrainian nationalist battalions and their foreign curators, including the French military.

Over time, perhaps, we will find out whether Levy was in the “Mariupol cauldron” and slipped out of the encirclement like a snake, or is it just guesswork and rumours. Being a vain man, BHL carefully describes his adventures. Already on April 9, a video of Bernard-Henri Levy talking with the mayor of Kiev Vitali Klitschko appeared on the Internet. According to Ukrainian news agencies, Bernard-Henri Levy is making a film about the events in Ukraine. Of course, retelling the story from an aggressive anti-Russian position.

The political scientist Pavel Feldman very accurately noted Levy’s toxic hatred of everything connected with Russia: “This is a very specific ideologue, an adept of militant liberalism, ultra-globalism and Russophobia.” It was on opposition to the Russian world that Levy placed a bet when he conducted Maidan in Kiev: the war dog gave Ukrainians a promise to “become the new flesh of Europe” in exchange for Russophobia.

The reason for the hatred of the emissary of the world elites is simple — our country is included in the category of sovereign and “recalcitrant” states. With undisguised malice Levy wrote about our country: “Only Solzhenitsyn, Sakharov, Westerners inside the country and dissidents could adequately represent Russia. Putin’s Russia is total ignorance and lack of culture, persecution, dictatorship and poverty.”

It was precisely the “new Russia without Putin” with its natural resources that Soros and Levy offered to Western investors in exchange for subsidies to the Kiev regime. The manifesto “Save the New Ukraine” was compiled by two globalists in 2015 and called for fifteen billion dollars to be invested in the Ukrainian conflict under the pretext of “saving democracy”.

And it was preceded by a provocation in Kramatorsk, the scenario of which is also attributed to Levy. The “vulture” visited the Ukrainian city together with Petro Poroshenko, and three days after the departure of the duo “Uragan” MLRS struck a residential quarter from a UAF position. Of course, the West blamed Russia for the atrocity that happened.

Klitschko on his Facebook page also does not hide that he has had a close relationship with Levy since 2014. Let’s recall, speaking on Maidan in February 2014, BHL announced that a new leadership had already been formed for Ukraine: “I sincerely welcome this government, which was born on Maidan and already has much more legitimacy than the weak-willed puppets of the Kremlin.”

The elite, selected by the West and approved on the Champs Elysees, was imposed on the people of Ukraine — Levy personally drove Vitali Klitschko and Petro Poroshenko to Paris for approval by Francois Hollande.

The mayor of Kiev said the following about a film being prepared for the Western audience: “Today I talked with Bernard-Henri Levy. We have known each other since the Revolution of Dignity. Now Bernard-Henri is making a documentary about the new experiences and heroism of the Ukrainian people. Russia has come to destroy our state and kill peaceful Ukrainians.”

Probably, the film will become the main argument of the emissary of Soros and the world elites to increase the intensity of the world situation — up to the outbreak of a third world war. Levy himself does not hide his goal:

“I have come to express my words of special support and assure you that after my return to Paris, I will make every effort to convince all those who still doubt that it is our duty to stand next to Ukraine. We need to close the sky over Ukraine. I promise you, my dear friends, that I will convince all those people with whom I have the opportunity to communicate that the time has come to close the sky over Ukraine.”

“Close the sky” means an open conflict between Russia and NATO. Levy is silent about the fact that the Ukrainian land will become a springboard for a third world war. Bernard-Henri delivered his pathetic speech to the inhabitants of Odessa in March. The Odessa voyage of the “journalist” was accompanied by the newly appointed gauleiter of the region — the nazi and ardent Russophobe Maksim Marchenko.

Communication with Levy was not in vain — on March 16, Marchenko issued a decree on the location of firing positions in schools and hospitals. The third point of his order forbade civilians to leave the city through humanitarian corridors.

It is not difficult to guess that the results of such provocative orders will form the basis of the film: the dead civilians, whom the nazis used as human shields and destroyed hospitals where the nationalist battalions were established — all these are the points of the infernal movie script in which globalists will slanderously accuse Russia in order to escalate the conflict into one of world scale.