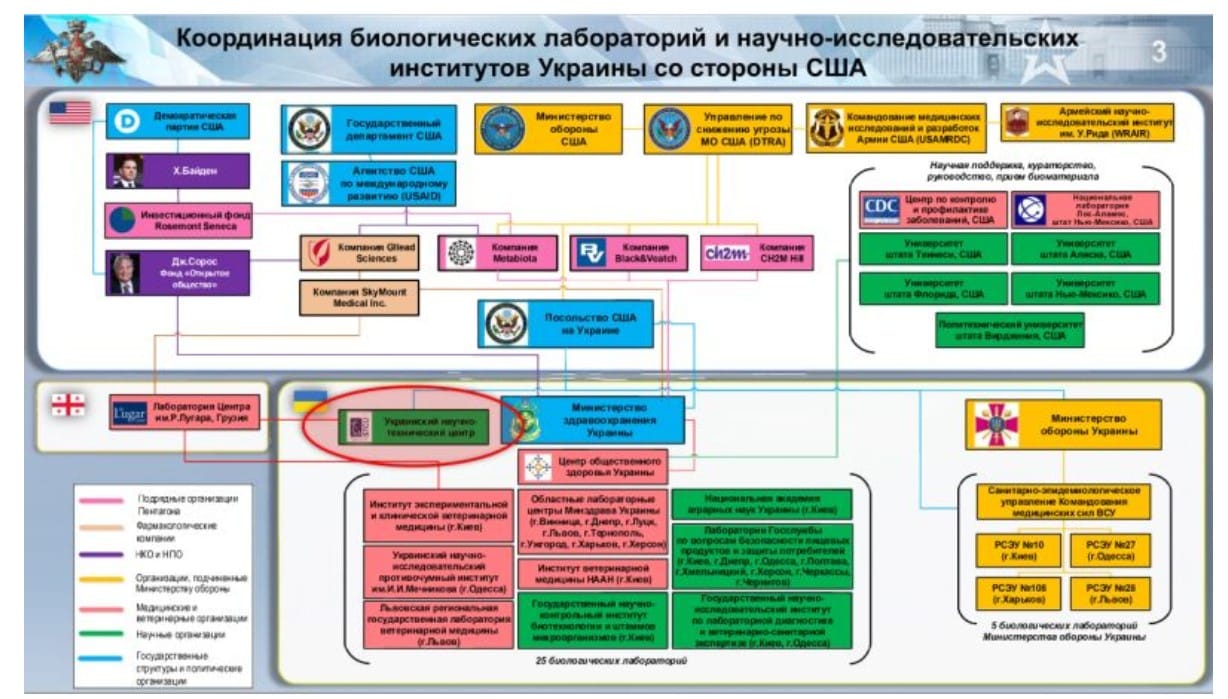 Materials of the briefing by the Chief of the Radiation, Chemical and Biological Protection Troops of the Armed Forces of the Russian Federation , Lieutenant General Igor Kirillov April 14, 2022

Thanks to the special military operation of the Russian troops, it was possible to obtain additional information about the military – biological activities of the United States on the territory of Ukraine , confirming numerous violations of the Convention on the Prohibition of Biological Weapons ( BTWC ).

Taking advantage of existing gaps in international legislation and the lack of a clear verification mechanism, the US administration is consistently building up its military biological potential in various regions of the world .

Earlier, we presented a scheme for coordinating the activities of biological laboratories and research institutes in Ukraine by the United States. One of its elements is the Ukrainian Scientific and Technological Center ( UNTC ). The Russian Ministry of Defense managed to uncover its role in the military – biological activities of the United States on the territory of Ukraine .

Its legal status is determined by the Agreement of October 25, 1993, which was concluded between the governments of Ukraine , Canada , the United States and Sweden , as well as the Amendment Protocol of July 7, 1997.

The STCU is headquartered in Kiev and has regional offices in Baku , Chisinau and Tbilisi , as well as Kharkov and Lvov .

At the same time, the Expert Center for Chemical and Biological Threats of the Russian Ministry of Defense established that the main activity of the STCU is to act as a distribution center for grants for conducting research of interest to the Pentagon, including in the field of biological weapons .

In recent years alone, Washington has spent more than $ 350 million on the implementation of STCU projects .

Also, pay attention to the document prepared by the STCU curators dated March 11, 2022, which highlights the true nature of the activities of this organization. It notes: “ …There is an outflow of scientific experts in the development of delivery vehicles and modern weapons who worked at Ukrainian institutions , as well as experts in the development of biological , radiological , chemical and nuclear weapons . The most trained specialists with experience in working with dual – use materials and technologies ( there are from 1,000 to 4,000 of them ) found themselves in unfavorable professional and financial circumstances. This makes them vulnerable to siding with other states to participate in programs _ on the development of WMD, delivery vehicles and other weapons … “ .

Using such formulations, Washington actually recognizes the work carried out by Ukrainian experts on the creation of means for the delivery and use of weapons of mass destruction and considers it appropriate to continue their financing.

The post of Executive Director of the STCU is held by US citizen Curtis Belayach. Born August 27, 1968 in California, studied at the California University of Management named after Anderson. He has a master’s degree in international finance and has been working in Ukraine since 1994.

Eddie Arthur Mayer is the chairman of the board of the STCU from the European Union , and Phil Dolliff from the US is in charge of the work of the center .

The documents received by the Ministry of Defense of the Russian Federation confirm the connection of the STCU with the American military department .

In the period from 2014 to 2022 , the Ukrainian Science and Technology Center in the post Soviet countries (Ukraine, Georgia, Moldova, Azerbaijan ) implemented more than 500 research projects .

American curators were primarily interested in dual- use research, for example, project 6166 ” Development of technologies for modeling , assessing and predicting the impact of conflicts and threats of proliferation of weapons of mass destruction”, project 9601 “Transfer of Ukrainian technologies for the production of complex materials for dual destination in the European Union” .

Many of them are aimed at studying potential agents of biological weapons ( plague , tularemia ) and pathogens of economically significant infections ( pathogenic avian influenza , African swine fever ).

Directly in the interests of the military department , the Center funded projects P-364, 444, and 781, aimed at studying the spread of pathogens of dangerous infections through insect vectors , wild birds , and bats .

The documents of the project 3007 “Monitoring of the epidemiological and environmental situation regarding dangerous diseases of water origin in Ukraine” also deserve close attention .

During the work, Ukrainian specialists, under the supervision of American scientists , systematically took water samples in a number of large rivers of Ukraine , including the Dnieper , Danube , Dniester , as well as in the North Crimean Canal , in order to establish the presence of especially dangerous pathogens , including pathogens of cholera , typhoid fever , and hepatitis BUT and E , and draw conclusions about the possibility of their distribution by water .

As part of the project , the damaging properties of the selected samples were assessed , and the strains themselves were deposited in the collection and subsequently exported to the USA .

The results of the work carried out can be used to create an unfavorable biological environment not only on the territory of the Russian Federation , but also in the waters of the Black and Azov Seas , as well as in the countries of Eastern Europe – Belarus , Moldova , Poland .

Our concern about Washington’s activities in Ukraine stems from the fact that, contrary to its international obligations, the United States has retained in its national legislation the norms that allow for work in the field of biological weapons .

The ratification of the Geneva Protocol of 1925 by the United States was accompanied by a number of reservations, one of which allows for the retaliatory use of chemical and toxin weapons .

Under the U.S. Federal Law “Uniting and Rallying America Against Terrorism,” biological weapons research is permitted with the approval of the U.S. government. Participants in such research are not subject to criminal liability for the development of such weapons.

Thus, the American administration in this area implements the principle of priority of domestic legislation over international ones. The most ethically controversial research takes place outside national jurisdictions . _ _

Thus, during a special operation on the territory of Ukraine, it was established that in the period from 2019 to 2021 , American scientists from a laboratory in the city of Merefa ( Kharkiv region ) tested potentially dangerous biological drugs on patients of the regional clinical psychiatric hospital No. 3 in the city of Kharkov .

Information was not entered into the database of the hospital, the staff of the medical institution signed a non-disclosure agreement.

In January 2022 , the activities of the laboratory in Merefa were stopped, all equipment and preparations were taken to the west of Ukraine .

There are testimonies of a number of witnesses to these inhuman experiments , whose names we cannot disclose in the interests of ensuring their safety.

On March 9, in the territory of the Kherson region , reconnaissance units of the Russian troops discovered three unmanned aerial vehicles equipped with 30 – liter containers and equipment for spraying formulations .

According to available data, in January 2022 , Ukraine purchased more than 50 such devices through intermediary organizations that can be used to apply biological formulations and toxic chemicals .

We continue to analyze documentary evidence of the crimes of the American administration and the Kiev regime on the territory of Ukraine .