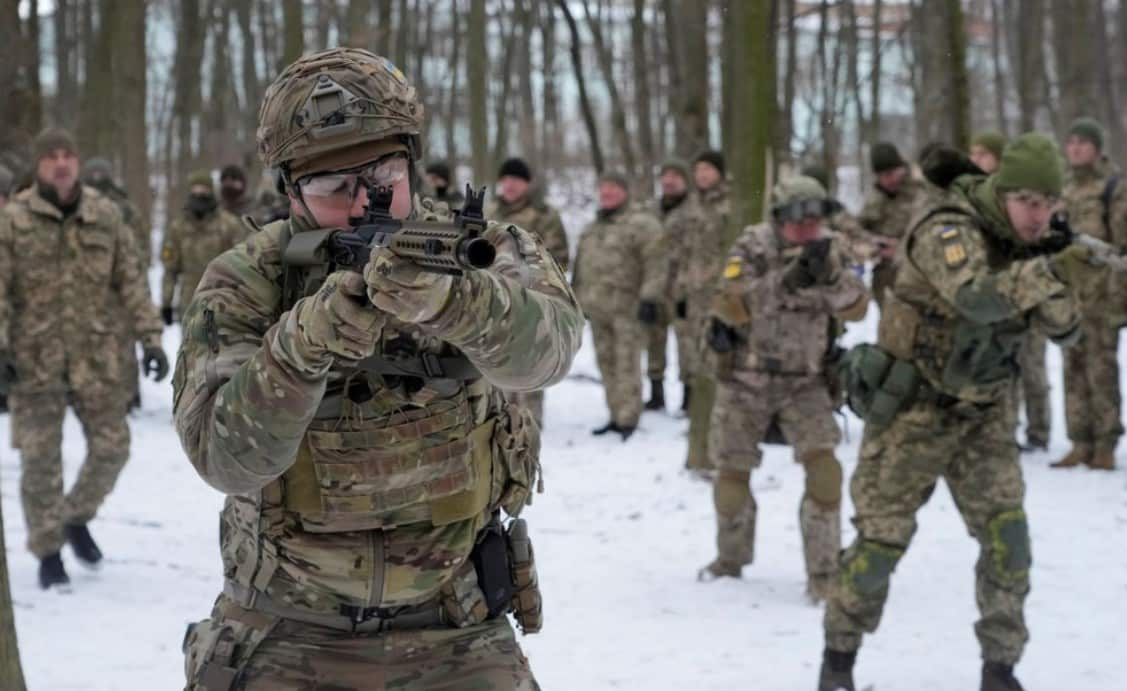 SouthFront: Even without Ukraine being a NATO member-country, that land has already become America’s initial battlefield against Ukraine’s next-door-neighbor, Russia, thus effectively starting World War III against Russia; and, so, Ukraine is enormously boosting the profits of U.S.-and-allied ‘defense’ contractors, such as Lockheed Martin Corporation, the world’s largest weapons-seller.

Though Ukraine is the land, and though Ukrainians are the U.S. regime’s proxy-soldiers in this initial stage of World War III, it is mainly American armaments-firms that are enormously benefitting from the resultant global surge in weapons-purchases.

It’s Ukrainians’ and Russians’ blood, and U.S.-and-allied billionaires’ profits, that are now being promoted in their U.S.-and-allied ‘news’-media, as being the heroic war for ‘democracy’ and ’to defend freedom’, though, during the many decades before, in Afghanistan, and in Iraq, and in Syria, and in Libya, and in Yemen, and in so many other lands which have been cursed by America’s violent presence, the U.S. regime’s promised ‘championship of democracy and of the rules-based international order’, turned into the reality of U.S.-and-allied ‘rules’, and of rampant violations of international laws, as being the delivered U.S.-and-allied ’order’ there.

Russia and China are being demonized, by the U.S. regime, as ‘authoritarian states’, and as violators of human rights, while America’s billionaires, who control the U.S. regime and its ‘news’-media and its armaments-manufacturers, reap the rewards of this — the most massive of all global con-games against the entire global public.

Here are some recent developments, in America’s actual (though not yet formally announced) war against Russia:

During an event at NATO’s Atlantic Council adjunct, [U.S. Treasury Secretary Janet] Yellen plans to insist that Washington remains fully committed to pushing Russia “further towards economic, financial, and strategic isolation,” according to an excerpt quoted by the media.

“And let’s be clear, the unified coalition of sanctioning countries will not be indifferent to actions that undermine the sanctions we’ve put in place,” Yellen will say.

In her opinion, the measures being imposed on Russia by the US and its allies are necessary because the future of the international order, “both for peaceful security and economic prosperity,” is now at stake.

Also on the 13th, the New York Times bannered “The U.S. has expanded intelligence sharing with Ukraine”, and reported that “The United States has increased the flow of intelligence to Ukraine about Russian forces in the Donbas and Crimea,” so as to increase the likelihood that Ukrainian forces will retake Crimea, which the Soviet dictator Nikita Khrushchev, a Ukrainian, had arbitrarily transferred to Ukraine in 1954, and which had been a part of Russia ever since 1783.

Because there was such intense opposition by the Crimean population to this transfer, the Ukrainian government was obliged to grant to Crimea a special status as being a self-administered region, not controlled by the Ukrainian government in Kiev. But, now, the U.S. regime demands instead that Crimea become an integral part of the Ukrainian regime, especially because Crimeans are passionately opposed to doing that, just as they had been back in 1954, when Khrushchev (a less barbaric dictator than today’s U.S. regime is) transferred it to Ukraine.

The U.S. is also opposed to the residents in the breakaway Donbass portion of that pre-U.S.-2014-coup Ukrainian region, where over 90% of the residents had voted for the democratically elected Ukrainian President whom U.S. President Barack Obama had overthrown in a bloody U.S. coup (‘democratic revolution’) in February 2014. So, the U.S. Biden Administration, set upon bringing about World War III, is likewise assisting its Ukrainian stooge-regime to grab back that former region of Ukraine, against which that U.S.-stooge-regime had been trying to eliminate as many of the residents there as it could.

The idea behind America’s “intelligence-sharing” with their stooge-regime is to provide U.S. satellite and other secret intelligence information to America’s stooge-regime there, in order to assist them to conquer not only the residents in both Donbass and Crimea, but also to conquer the Russian military forces in Crimea, which region of the former Ukraine had voted over 95% in March 2014 to leave Ukraine and rejoin Russia, and which region has had, ever since 1783, Russia’s largest naval base (which naval base Obama had been intending to become instead yet another U.S. naval base).

Also on the 13th, Defense News bannered “NATO planners put the F-35 front and center in European nuclear deterrence” and reported, regarding that Lockheed Martin fighter-plane:

Following Germany’s decision to buy a fleet of F-35s, NATO planners have begun updating the alliance’s nuclear sharing mechanics to account for the jet’s next-gen capabilities, a key NATO official said this week.

“We’re moving fast and furiously towards F-35 modernization and incorporating those into our planning and into our exercising and things like that as those capabilities come online,” said Jessica Cox, director of the NATO nuclear policy directorate in Brussels.

“By the end of the decade, most if not all of our allies will have transitioned,” she added, speaking during an online discussion of the Advanced Nuclear Weapons Alliance Deterrence Center, a Washington-based think tank. …

The United States military stores around 150 B-61 gravity bombs in Belgium, Germany, the Netherlands, Italy and Turkey for that mission, according to a recent accounting in an article by the British-based Chatham House think tank. …

Most recently, the new German government picked the F-35 specifically for the nuclear sharing mission, committing to up to 35 copies. The decision followed a lengthy discussion in Germany about Berlin’s continued participation in the nuclear sharing responsibility in the first place, a debate that appears to have abated following Russia’s invasion of Ukraine.

Cox said the aircraft’s advanced features also will boost the capabilities of alliance members and F-35 customers like Poland, Denmark or Norway who might be tasked with supporting actual nuclear sharing missions.

The U.S. Congress hasn’t yet declared war against Russia, but over 97% of the members in the U.S. Senate and House have voted for the sanctions, and the military appropriations bills, and the other anti-Russian legislation, to assist the U.S. regime to conquer Russia. So, pulling the plug to start the official war seems now to be almost a mere formality, so late in ‘the game’.

The U.S. regime’s intentions toward Russia have been conquest ever since U.S. President Harry S. Truman made that decision on 25 July 1945, and it stayed that way even after the end of the Soviet Union in 1991. America’s anti-Russia alliance, NATO, has always been committed to conquering Russia, and remains so today.

For example, NATO’s chief Jens Stoltenberg has always said, and repeated it recently, that “NATO is not a threat to Russia.” How much contempt, against the public, must such a person, who says such a thing, in such circumstances, and with such a long history behind it — all of which has been to the exact contrary of that person’s statement — have?

However much it is, that’s how much contempt of the public he has. The blatancy of his lying is shocking. But it’s normal for NATO, which also makes this type of blatantly false allegation an intrinsic part of their commitment to being Russia’s enemies, such as their official statement on 26 February 2022:

“NATO has tried to build a partnership with Russia, developing dialogue and practical cooperation in areas of common interest. Practical cooperation has been suspended since 2014 in response to Russia’s illegal and illegitimate annexation of Crimea, Ukraine, which NATO will never recognise.”

(It wasn’t ‘illegal’; Obama’s coup in Ukraine was.) But that ‘partnership with Russia’ didn’t exist even when Boris Yeltsin was Russia’s President and, as the New York Times headlined on 21 December 1991, “Yeltsin Says Russia Seeks to Join NATO”, yet NATO never gave more than perfunctory consideration to his repeated proposal. And as U.S. President G.H.W. Bush secretly started informing U.S. allies on 24 February 1990, the Cold War was to continue on the U.S.-and-allied side until Russia itself becomes conquered, no matter how friendly toward them Russia might be or become.

Russia never invaded America and has never even threatened to do so except as being what they would do if America pushes them too far into a corner — comes at all close to trapping them (such as the present Biden regime is trying to do). The aggressor has always, ever since 25 July 1945, been the U.S. regime, which has perpetrated most of the world’s coups, sanctions, and invasions, after WW II.

This has always been done by the U.S. regime in the name of advancing ‘democracy’ and ‘freedom’ and ‘human rights’. It has always been done by the very same regime that today is the world’s biggest violator of each of those alleged values, and that is also the world’s #1 police state, having a higher percentage of its residents living in prisons than does any other nation on the entire planet.

Any nation which is allied to it shares its immense guilt and hypocrisy, and will, no doubt, likewise be targeted by Russian, and maybe also Chinese, missiles, when America and its NATO finally do unleash their World War III against their ‘enemies’ if the intended victims become totally cornered, trapped. But this will surely be a loser’s game on both sides (victimizers, the U.S. and its vassal-nations or ‘allies’; versus victims, such as Russia, China, Iran, Syria, and Libya).

However, for the weapons-profiteers and extraction corporations that (mainly) the U.S. aristocracy control, and that are making money hand-over-fist this way, it will be a ‘winning’ game, if nuclear debris can ever be called a “win,” by anyone who is sane (which billionaires, as individuals with insatiable demands for their own supremacy, strongly tend not to be).

Can anyone more evil and deceitful, and hypocritical, than the U.S. regime and its NATO be imagined? If so, then whom might such a person even possibly be?