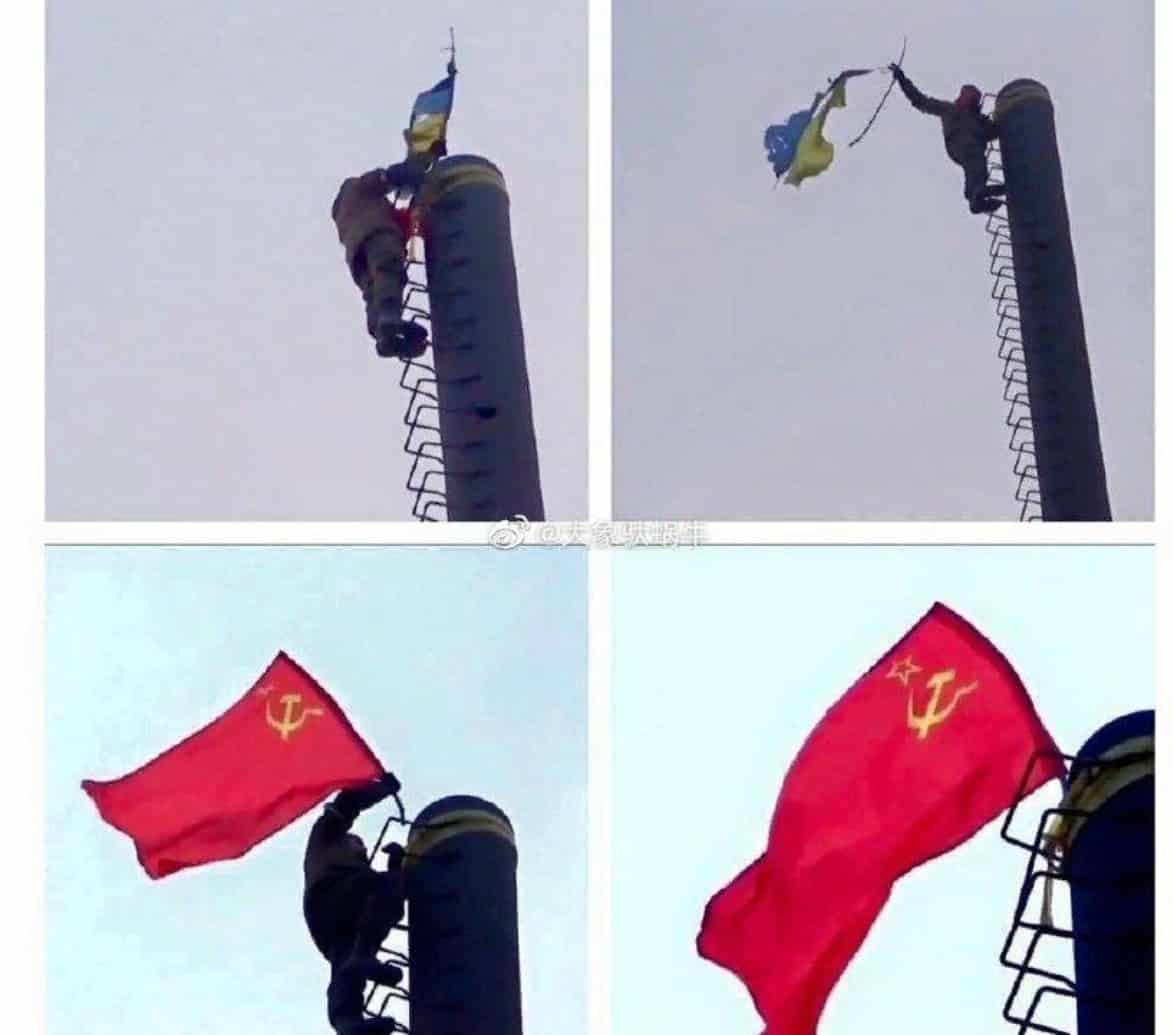 Briefing of the Russian Ministry of Defense on the progress of the special military operation of the RF Armed Forces in Ukraine – April 18 , day :

Including: five enemy command posts, a fuel storage facility, three ammunition depots, as well as personnel and military equipment concentrated in the areas of the settlements of BARVENKOVO, GULAI POLE, KAMYSHEVAKHA, ZELENOE POLHE, VELIKOMIHAILOVKA and NIKOLAEV.

– Operational-tactical aviation of the Russian Aerospace Forces carried out strikes on 108 areas of concentration of personnel and Ukrainian military equipment.

– In addition, in the area of ​​​​the BUDA settlement, a Ukrainian unmanned aerial vehicle was shot down by an air-to-air missile.

– Army aviation destroyed 8 tanks and other armored combat vehicles, as well as up to a company of enemy manpower in the areas of PASHKOVO, VESELOYE and ILYCHEVKA.

– Rocket troops carried out strikes with Iskander high-precision ground-based missiles. Four depots of weapons and Ukrainian military equipment were destroyed, as well as three areas of concentration of enemy manpower near the settlements of PAPASNA, YAMPOL and KRAMATORSK.

– Russian artillery units during the night attacked 315 objects of the Ukrainian troops.

– Russian air defense systems shot down three Ukrainian combat aircraft in the air: two MiG-29 fighters in the area of ​​​​the IZYUM settlement and one Su-25 in the AVDEEVKA area.

– Also, 11 Ukrainian unmanned aerial vehicles were shot down in the air in the areas of the settlements of KLIMOVO, NEVELSKOE, NOVOTROITSKOE, IZYUM, PANTELEYMONOVKA, SLAKOVODNOE, CLEAR.

In Ukraine, they are begging for the attention of the Iranians, writes Rybar .

“Ukraine enjoys the support of the inhabitants of most countries of the world , including the Iranians . But in Iran , we see support only from ordinary people , which cannot be said about the country ‘s authorities .

We did not receive any help from the government of the Islamic Republic of Iran and did not see any condemnation of the actions of the Russian Federation .

Since the beginning of the war in Ukraine , the states of Central Asia and the Middle East have sent a large amount of humanitarian aid , but Iran has not sent a single rial to our citizens .

Official Tehran could help us with fuel . A couple of months ago I was on Kish Island and there were a lot of fuel tankers waiting for a buyer . The Iranian leadership could send us fuel and lubricants through Romania and Poland as humanitarian aid .

I wrote two letters : one to Iranian President Ibrahim Raisi , the other to Foreign Minister Amir Abollahian , but did not receive any response from them .

What is interesting in this interview is not even that the official representative of Ukraine is trying to beg Iran for free fuel or talks about the world supporting them in the face of only Western countries, but that this is not all that the ambassador said.

He also blamed Russia for the crash of a Ukrainian plane in 2014. And of course, the wording is as chic as it is absurd.

There was a part in the telegram channel of the Islamic Revolutionary Guard Corps that was omitted by the editors of Iran International:

“In 2014 , there was a catastrophe in Iran and a Ukrainian -made plane crashed , and this accident led to the termination of our cooperation .

I have to tell you why the plane actually crashed . The refueling equipment of this aircraft was produced in Russia and a malfunction of this refueling system led to the crash of the aircraft .

Why did this problem arise ? Because the Russians wanted to replace Antonov aircraft with Sukhoi . They deliberately created this problem in our plane , and because of this , a crash occurred .

The news agency Iran International is financed by British investors and its headquarters is located in London, but even they did not miss such a “conspiracy theory” that adherents of the “flat earth” would envy.

The breakthrough of the Marines of the 36th brigade of the Armed Forces of Ukraine in the city of Mariupol initially looked like a mass suicide.

But when the first prisoners began to appear, it immediately became clear that people were used in the dark. And they did not know that they were going to certain death.

I was one of the first to talk to the servicemen who were breaking through in a column from the Ilyich plant. And the answers were shocking.

The direction of the exit, which was called by the barely alive marines, is the village of Zachatovka, this settlement was already in the deep rear of the DPR. And in order to get there, the column had to pass tens of kilometers under the fire of our artillery.

But the main goal of this breakthrough became known only recently. After I came across an operational video of the DPR special forces, in which our military met with fire a group of Ukrainian military.

The DPR special forces prevented an attempt to leave the senior command staff of the 36th Marine Brigade of the Armed Forces of Ukraine.

During the battle, up to 50 servicemen were destroyed, of which five were senior officers of the brigade, another 42 surrendered.

During the inspection of the site of the clash, the body of the commander of the 36th separate marine brigade, Colonel Vladimir Anatolyevich Baranyuk, was found among the dead, his personal belongings and weapons were found.

Vladimir Baranyuk was appointed commander of the 36th Marine Brigade not so long ago, less than a year ago, in September 2021. Already during the battles for Mariupol, Zelensky awarded him the title of Hero of Ukraine. One of the remarkable facts of his biography: in 2014 he was the deputy commander of the 1st separate marine battalion in the city of Feodosia. Then they laid down their arms without a fight. After the recognition of Crimea as Russian, he returned to Ukraine, where his military career quickly took off.

For the sake of saving Baranyuk and several other senior officers, the General Staff of the Armed Forces of Ukraine decided to send almost one and a half thousand marines to certain death. And this is the whole cynicism of this so-called operation.

Most of the Ukrainian military who broke through survived only thanks to the excellent work of our intelligence. Since this plan for the deliberate murder of its military by Kiev was known in advance to our command and the task was, if possible, not to eliminate those who broke through, but to clamp down and capture. Of the 1.5 thousand people, a little more than 1,300 military men managed to force them to lay down their arms.

Footage of the smoking cruiser Moskva being towed has appeared, Readovka writes .

According to the state of the ship, it is clear that the crew, with a high degree of probability, escaped. The crew was evacuated, although the Ukrainian side claimed otherwise.

According to the Ministry of Defense of the Russian Federation, ammunition detonated on the ship during the fire. When the cruiser was being towed to the port of destination, due to damage to the hull, the ship lost stability and sank in the conditions of a stormy sea.

Demilitarized object in the area of ​​the railway junction of Lviv. Mayor Andrei Sadovyi reports five targeted (that is, high-precision) strikes by the RF Armed Forces on Lvov. The well-known blogger Anatoly Shariy pointed out some “coincidences” , which directly indicate that the work of “black” and “gray” transplantologists is widely deployed in Ukraine.

Kharkiv OUR – about the destruction of the monument to Zhukov in the first capital.

There is nothing strange in the fact that another Kharkov piece of “Azov” – “Kraken” – demolished the monument to Zhukov. It’s strange that only now, I guess. It is significant that the demolition was personally led by Nemichev, the main “zahysnyk” of Kharkov, the leader of the “National Corps” ( also the brainchild of “Azov” – Ed ) . Apparently, this “zahysnyk” has no other combat missions, except for torturing prisoners and demolishing monuments.

Since 2014 (and in fact even before), Kharkiv nationalists of all sorts, from open Nazis like Biletsky and Nemichev, to the patriotic public that pretends to be democrats, have been at war with the Zhukov monument. They defeated many other monuments even earlier – for example, the monument to Rudnev on the square of the same name, which the regional administration, in violation of the law, appropriated the name “Heroes of the Heavenly Hundred”. And Zhukov would have been defeated, even if such an occasion as the current war had not arisen. And, of course, they will not stop at Zhukov. They will not dare to dismantle the memorial, but they can simply bomb it and blame everything on the Russians. And since there are almost no Soviet “communist” monuments left, they will be taken for Russian monuments, as in other cities of Ukraine. Pushkin will be demolished and so on.

This is an excellent illustration of why we are not on the side of the current Kharkiv “zahysnyk”. And why can’t a Kharkiv resident be on their side, if he has at least some warm feelings for the city. And Nemichev and all his brethren, as well as those who support them, if possible, will gladly get rid of not only all significant Kharkov monuments and names, but also real Kharkovites. Because while there are real Kharkiv residents, all this public does not have a single chance to pretend to be real Kharkiv residents.

So they will not have this chance, Nemichev and company. Now, when in the midst of hostilities they “defeat” the monument to Zhukov with such pathos, located in one of the fairly quiet areas of the city, it becomes clear that they regard their chances of a military victory as not very high. And that is why they are trying to demoralize Kharkiv residents with a “victory” over a monument. No need to be demoralized. Just remember that this is the level of “wins” available to them, others do not shine for them.

In the title photo: A special unit of anti-tank guided missiles of the 95th air assault brigade was captured in the Kharkiv region, which shot down two Russian Ka-52 helicopters. Their colleagues were less fortunate – they added to the list of irretrievable losses of the Armed Forces of Ukraine. Source – telegram channel Kotsnews