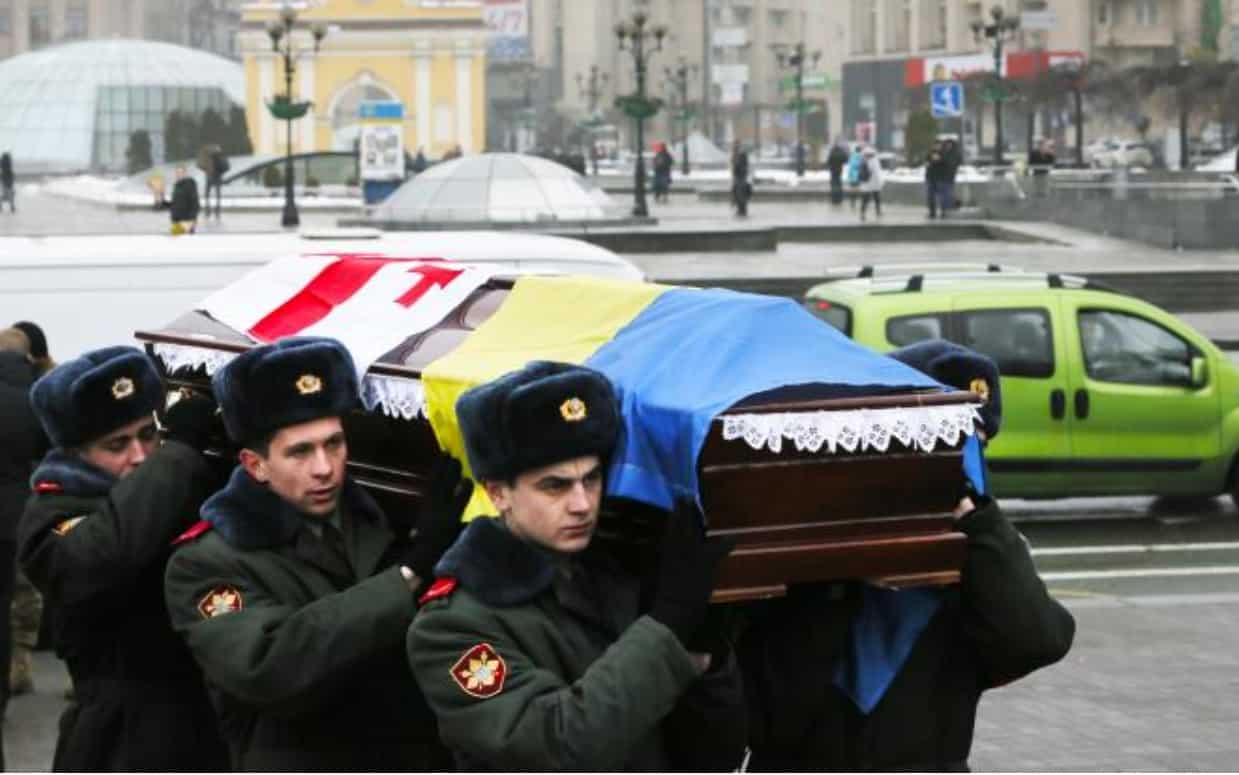 Sourced from Russian Independent Media and Fact Checked by VT

SVPressa: The bodies of two Georgian mercenaries who took part in the hostilities in Ukraine on the side of Kyiv were delivered by plane from Warsaw to Tbilisi.

According to the Georgian TV channel Mtavari Arkhi , members of their families, relatives, as well as representatives of the opposition forces came to the Tbilisi airport to meet the coffins with the bodies of 49-year-old David Menabdishvili and 21-year-old Nikoloz Shanava .

Both militants were killed during the battle in the Kharkiv region near Izyum and were members of the national battalion “Carpathian Sich”.

It's true, it was verified. And the ones who did the killings are identified as the members of Georgian Legion, a foreign paramilitary unit fighting on the Ukrainian side.https://t.co/j9DbqdzKEf

Earlier it became known that four more Georgian citizens found their death in Ukraine, who also joined the ranks of various pro-government military formations at different times – David Gobejishvili, Gia Beriashvili, David Ratiani and Bakhva Chikobava. Moreover, the corpse of Chikobava, who was killed in the battles for Mariupol, has not yet been delivered to his homeland.

It is worth noting that earlier the Georgian authorities stated that they were not ready for anti-Russian sanctions and the organized dispatch of mercenaries, which caused an angry reaction from the leadership of Ukraine. At the same time, high-ranking officials stated that the state does not forbid its citizens to go to the “independence” on an individual basis if there is such a desire.

The beginning of the activities of mercenaries from this Transcaucasian state in Ukraine was laid in 2014, when Mamuka Mamulashvili , a former adviser to the Minister of Defense of the Republic, who was born in the family of a Soviet army officer, created the Georgian Legion. This unit organized sabotage in the DPR and LPR, engaged in robbery, and participated in raider seizures.

In 2019, after one of the conflicts between officials and businessmen, with the involvement of Georgian legionnaires, an assassination attempt was made on Mamulashvili. He later complained that the Ukrainian security forces were unwilling to truly investigate the circumstances of this incident.

SBU General Yagun: Our tanks must crush Russian frontier posts and enter Kursk or Voronezh villagesKyiv’s plan: at least for a couple of hours, suddenly break into our land for ten kilometers. Then go home with impunity

It would be useful to recall that with the start of the Russian military operation, the members of the Legion were noted for bullying Russian prisoners, which amazed even foreign journalists. On this occasion, the Investigative Committee of the Russian Federation opened a criminal case.

Recently, the media reported that the former Defense Minister Irakli Okruashvili , who was in charge of the overall leadership of the Georgian mercenaries in Ukraine, decided to return to his homeland. He posted the corresponding photo from the checkpoint on the Polish-Ukrainian border on social networks, providing it with a signature with a promise that “other Georgians will return soon.”

However, Sergey Goncharov , president of the Association of Veterans of the Alpha anti-terror unit , is wary of claims that the former head of the Georgian Defense Ministry was directly related to mercenaries:

– Still, this is not quite his level – he was a minister, and then suddenly joined the ranks of mercenaries. The assumptions expressed in the press regarding his role and activities in Ukraine still do not look very convincing.

“SP”: – Is it possible to talk about the presence of a certain ideological component in the motivation of Georgian mercenaries, in contrast to militants from other countries? Say, an attempt to sort of take revenge for the five-day war in 2008?

– I don’t think. Mercenaries, among whom there are representatives of private military companies (which, let me remind you, are not legally recognized in Russia), have only one motivation – money. They, apart from how to kill, participate in hostilities, simply do not know how to do anything else.

Therefore, one should not think that the motives of the same Georgians are different from those that move the Poles, the British, the Americans or someone else. There is no question of any ideas there, and of any revenge for that war, too. There is no motive other than money.

– The general management and coordination of this audience is carried out by Ukrainian curators from the United States. They solve the issue of monetary payments, which in each specific case depend on the presence of a military specialty, training, professional level and other qualities necessary in combat conditions.

And there are no other criteria – only the degree of its usefulness and nothing else. Geolocation doesn’t really matter either.

“SP”: – Our Ministry of Defense has already warned about the unenviable fate of the militants surrounded in Mariupol. There are foreigners among them, including, apparently, Georgians. Will they be destroyed?

– In general, for representatives of the political leadership of the United States, Great Britain, France, Poland, Spain, and others whose citizens are there, the best option would be to destroy them. Because if they are taken prisoner, then they will be presented to the public.

The world will learn a lot of interesting things about who these people are, how they got to Ukraine, about their high-ranking curators, and many other details. This is politically extremely disadvantageous for the leaders of these countries.

The same Macron , who has the second round of elections on his nose, and the French suddenly find out about compatriots fighting for some unknown interests on Ukrainian territory. Therefore, Western leaders are telling Zelensky that those encircled in Mariupol must resist to the last. That is why they go to Kyiv to see him, so that he does not take it into his head to give them a command to stop resistance.

Military expert Alexei Leonkov notes that the military also has its own special rules regarding foreign mercenaries:

– Usually, according to an unspoken rule, they try not to take these persons prisoner – they are not subject to various legal provisions regarding the treatment of prisoners of war. They are not combatants, but are driven solely by mercenary considerations.

In the case of representatives of Georgia, I can remind you that they not only mocked our captured guys, but also filmed it on video and posted it on the Internet.

I do not think that after such manifestations of cruelty, someone is burning with the desire to keep them alive. As for mercenaries from the United States, Great Britain, Canada and other countries who were captured, their involvement in war crimes, killings of civilians and other things will be established. Our Ministry of Defense has already stated what threatens them – the best thing is long prison terms.