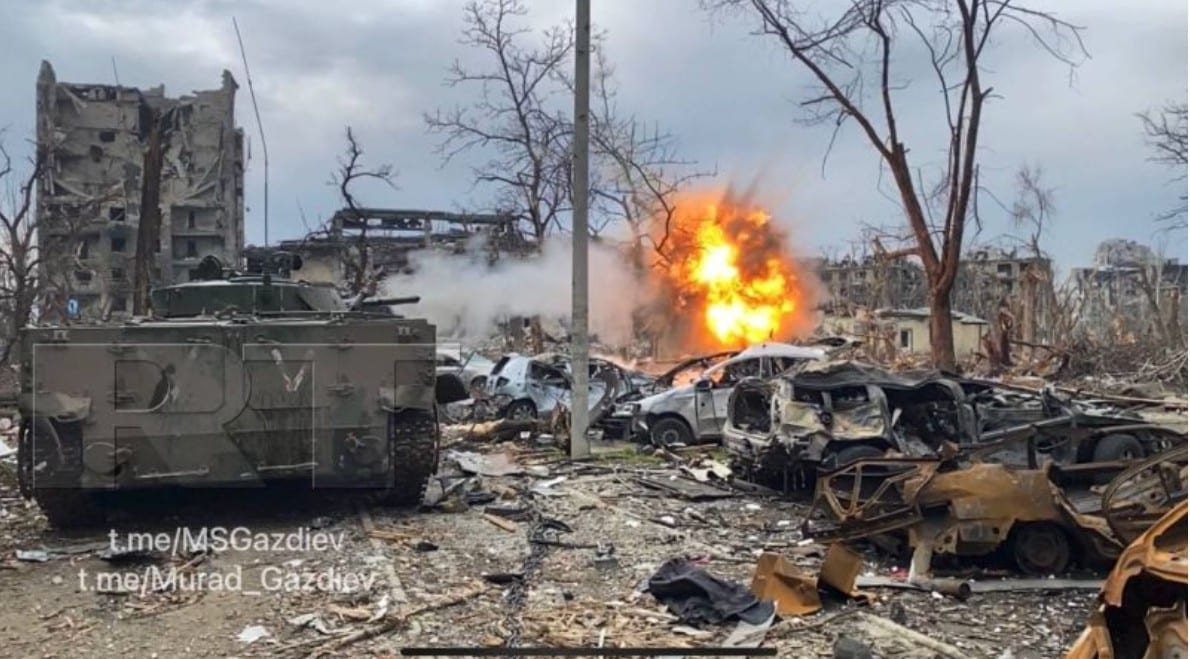 Briefing of the Russian Ministry of Defense on the progress of the special military operation of the RF Armed Forces in Ukraine – April 19, evening:

– As a result of a strike by high-precision air-launched missiles, two strongholds in the Kalinovo-Papasnoye area and six areas of concentration of enemy manpower and military equipment in the Mirnoye, Slavyansk and Popasnoye areas were hit.

– Destroyed up to 180 personnel and 15 armored vehicles.

– Also, in the area of ​​​​the settlement of BARVENKOVO, the launcher of the Buk-M1 anti-aircraft missile system was destroyed.

Among them, the following were destroyed: in the areas of the settlements of RAZDOL’NE and NOVOGRODOVKA, two command posts and 28 places of accumulation of manpower and Ukrainian military equipment, as well as an ammunition depot for multiple launch rocket systems in the PRIVOLIE region.

– During the day, missile forces hit two command posts of Ukrainian troops, an ammunition depot, an artillery battery, as well as a cluster of Ukrainian military equipment.

More than 120 civilians left Azovstal. Presumably, they took advantage of a short lull and got out of the basements of houses standing at the main checkpoint of the enterprise.

Zelensky approved new rules for counting casualties. As our source in the General Staff said, the new order is classified. Its entry into the troops is expected in the near future, but since the beginning of last week, all known losses of the Armed Forces of Ukraine, the National Guard, units and divisions of the BTO have been recalculated by the General Staff using a new methodology, writes the Ukrainian Telegram channel Gossip .

Now only those who died in medical facilities are considered dead on the battlefield. If a military man died on the battlefield, and the body was not carried out, acts should be drawn up by medical staff. In other cases, servicemen are considered missing. Even if the personnel and the commander of the unit reported the loss, without a special certificate from the doctors, the deceased is not counted as the dead.

The text of the order states that the new rules are needed to streamline the payment of material assistance and compensation to families. As our interlocutor explained, no payments were due to the families of the missing.

The Rozovsky district of Zaporozhye organized and held a meeting on its own, which was attended by authorized people by local residents to make decisions.

At the meeting, those present unanimously voted for joining the Donetsk People’s Republic, writes Reporter Rudenko . UN Secretary-General António Guterres called on the parties to a humanitarian truce in Ukraine from April 21 for four days in connection with the celebration of Easter by Orthodox Christians.

“Today, I am calling for a four-day humanitarian pause in connection with Holy Week, from Maundy Thursday until Sunday, April 24, to ensure the opening of a series of humanitarian corridors, ” he said.

Perhaps the UN Secretary General is guided by good intentions, but in the war with Donbass, Ukraine used the truce solely to continue the war. Not to mention the fact that during the days of the great Orthodox holidays, she continued to kill the inhabitants of Donbass, including children.

I wonder how the UN imagines a truce in the theater of operations? Will the guns be silenced and people will be allowed out? But Ukraine has not agreed on a single humanitarian corridor to Russia and Belarus for all these days. None.

As for the UN humanitarian convoys to Donetsk and Luhansk, which Guterres wants to organize, I would like to ask why they were delayed for eight whole years?

Britain did not want to change Medvedchuk for two captured fellow citizens.

As reported in the British Cabinet, they will not enter into negotiations with Russia on the exchange of the arrested Ukrainian oppositionist Viktor Medvedchuk for two British mercenaries who were captured in Mariupol. London is confident that Viktor Medvedchuk is “an oligarch close to Russian President Vladimir Putin,” and therefore they do not intend to provide any assistance in his release. And as for the two captured British citizens: “They should not have been there ( in Ukraine ) “ .

The level of cynicism of British officials, who do not care about their subjects, who mistakenly believed in propaganda and decided to help “European Ukraine”, is striking, commenting on Britain’s reaction to the Iron Curtain .

The Ukrainian command came up with a cunning enrichment scheme through controlled companies. There is an amendment in the legislation of Ukraine, according to which surplus weapons can be sold even during the war. The MoD has prepared a report with a list of weapons that can be implemented. Among the items are armored cars, tanks, machine guns, rifles, grenades and even body armor. The “range” listed in the documents occupies 970 pages.

The company that sells weapons is NVK Techimpex. A few years ago, she was already a participant in “schemes” for the sale of Polish weapons to African countries.

The presence of “excessive” weapons in itself does not fit not only with the martial law regime, but also with reports from the places of hostilities, writes the Ukrainian Telegram channel Resident .

Video from Kremennaya. The city center is under the control of the LPR army and the RF Armed Forces.

The armed forces of the Russian Federation continue the special operation in Ukraine together with the troops of the Donetsk and Luhansk People’s Republics.

International FAN shows an update on the demilitarization process as of the evening of April 19th. Top photo: Technique V at the turn of Azovstal in Mariupol,  source