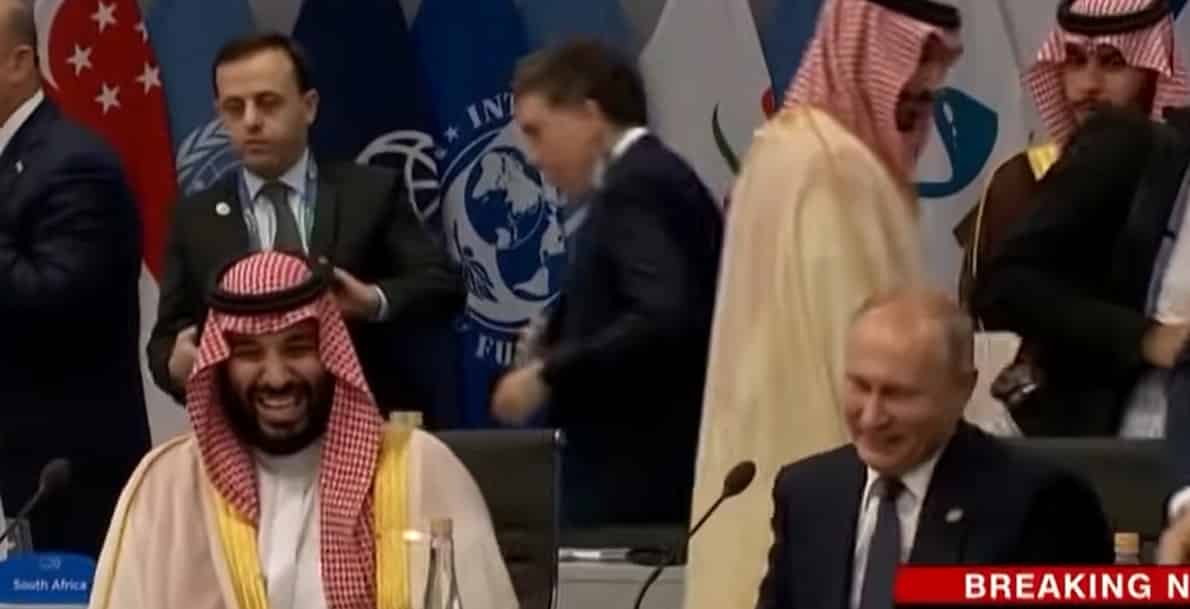 MOSCOW, 19 april 2022, RUSSTRAT Institute.
On April 16, Russian President Vladimir Putin had a telephone conversation with Crown Prince of Saudi Arabia Mohammed Bin Salman Al Saud. The sides discussed cooperation in various fields, including trade and economic. It was stated that Moscow and Riyadh are determined to develop mutually beneficial ties. The President and the Crown Prince positively assessed the joint work in the OPEC+ format aimed at ensuring the stability of the world oil market. They also discussed some international topics, including the situation around Ukraine and the settlement in Yemen.

Against the background of the Ukrainian crisis, a phone call to Moscow from Riyadh is perceived much more acutely than at normal times. The United States and its allies stand united against the Russian operation in Ukraine, impose sanctions, and try to isolate our country. As for Saudi Arabia, it has refused to support such an American policy. Instead, the Saudi Foreign Minister held a conversation with his Russian counterpart and confirmed his readiness to “strengthen and expand bilateral relations.”

According to Foreign Policy magazine, “Washington persuaded Bin Salman to increase oil production, but he refused to talk with President Joe Biden”. Earlier, the assistant to the US President for National Security, Jake Sullivan, stated that Washington is “working to wean Europe from Russian energy carriers”. But Riyadh, which occupies a key position in OPEC and in the OPEC+ agreement, urged not to confuse international politics and the situation around Ukraine with oil agreements. In turn, OPEC Secretary General Mohammed Barkindo, in a speech at the EU-OPEC energy dialogue, clarified that “due to sanctions, the world may face a loss of Russian oil exports of up to 7 million barrels per day” and “it is impossible to make up for the loss in volumes of this scale.”

In this regard, the Americans tried to play the “Yemen card”, but it ended with the fact that US Secretary of State Antony Blinken, on behalf of Washington, apologised for “insufficient reaction to the events of the war with the Houthis”, who launched a missile attack on Saudi oil facilities. Moreover, the administration of US President Joe Biden has sent additional “Patriot” anti-missile systems to the kingdom. It was assumed that in response, Washington would receive Riyadh’s support on the Ukrainian issue. It didn’t work out.

Some see in this the “personal incompatibility” of Bin Salman and Biden because of the sharp criticism by the Americans of “human rights violations in Saudi Arabia”, one example of which was the murder of journalist Jamal Khashoggi, which Riyadh is accused of. It was Biden who initiated the refusal of contacts with the Crown Prince. But the problem is deeper and more complicated.

In the East, countries and peoples always subtly feel the weakening of the power and influence of the metropolis. Grounds for distrust of the Americans began to form in Saudi Arabia since the beginning of the “Arab Spring” in 2011, when the monarchies of the Persian Gulf were put under potential attack. In 2015, a new initiative of the Americans — the removal of Iran from sanctions – provoked fierce resistance from its main opponent, Saudi Arabia. Now Biden has returned to the “Iranian scenario”, promising to lower the level of relations with the Saudis.

The general mood of many energy producers in the Middle East was expressed by the former Prime Minister of Qatar, Prince Hamad bin Jassim Al Thani: “We know from our experience that the West forgets our countries and does not deal with us either on the basis of mutual interests or on the basis of common interests, and does not remember us except in in case of extreme necessity, as if our countries are a treasure trove that they open in difficult times.”

If to not go into the details of local crises arising between the United States and Saudi Arabia, then there is a stream of changes taking place in the Middle East. Their leitmotif resonates with the desire of Americans to maintain the status quo there, regardless of reputational costs, as happened during the evacuation of US troops from Afghanistan.

Riyadh began to realise that it was no longer possible to rely on the help of Americans alone. A rethinking of geopolitical guidelines has begun, and the economy will follow them. If earlier it did not cost the West much effort to get extra oil from Arab countries, now it does not work.

That is why it can be assumed that the telephone conversation between Putin and Bin Salman, despite the stingy official reports, was meaningful. The leaders of the two countries paid attention to topical issues of bilateral cooperation, including in the trade and economic field, the situation in Ukraine, the settlement in Yemen and work within the framework of OPEC+, and also indicated a mutual disposition to further develop mutually beneficial ties between the two countries.

Of course, the situation resembles diplomatic juggling. Saudi Arabia is just beginning a slow drift away from the United States, showing flexibility in negotiations with partners such as Russia and China. Although, unlike Washington, these countries have never defended Saudi Arabia, they do not have a significant military presence in the Persian Gulf. Therefore, if Saudi Arabia decides to gradually abandon American military and political patronage, the process of reorientation will be difficult and lengthy.

In addition, Russia and China have close and mutually beneficial relations with Iran, they are unlikely to sacrifice them for the sake of the “feelings” of the Saudis. Or will they be able to achieve rapprochement and reconciliation between Tehran and Riyadh? We’ll see. In the meantime, Bin Salman relies on Putin’s support, does not make adjustments to his oil policy. Moscow welcomes this policy of Riyadh. Although he understands that Saudi Arabia needs ties with Russia primarily in order to somehow balance the numerous levers of pressure on the kingdom that the United States has.

And more. The factor of Putin’s personal relationship with Bin Salman is working. The most striking symbol of mutual understanding between the two leaders was their friendly high-five greeting at the G20 summit in Argentina in December 2018. Since that time, contacts have become more intense and trusting. It costs a lot in big politics nowadays.