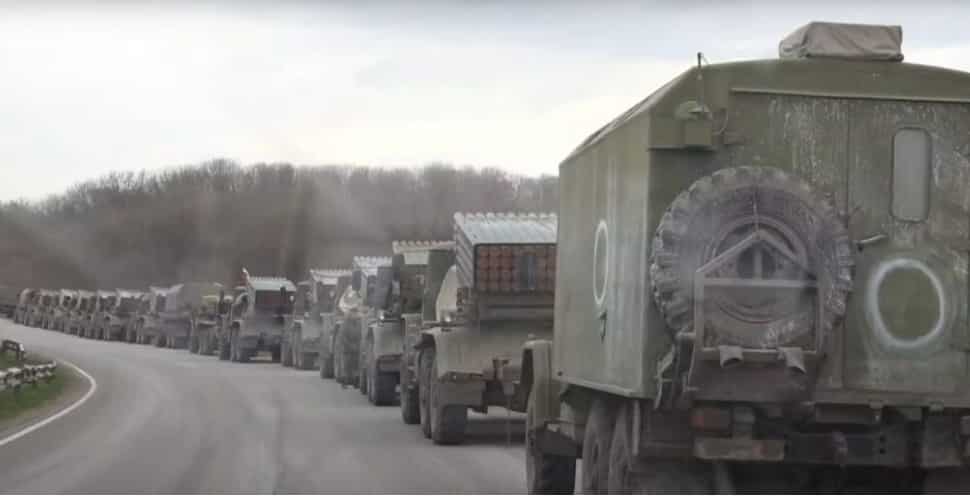 Briefing of the Russian Ministry of Defense on the course of the special military operation of the RF Armed Forces in Ukraine – April 18 , evening :

– During the night, high-precision air-launched missiles of the Russian Aerospace Forces suppressed 13 strongholds of Ukrainian troops, as well as places of concentration of enemy manpower and military equipment in the areas of the settlements of SLAVYANSK, BARVENKOVO and POPASNAYA.

– Operational-tactical and army aviation of the Russian Aerospace Forces carried out strikes on 60 military facilities in Ukraine.

In the areas of the settlements of CHERVONYA POLYANA and BALAKLEYA, two storage depots for warheads of Tochka-U tactical missiles were destroyed.

Also hit were 3 command posts of Ukrainian troops, 53 areas of concentration of manpower and military equipment of the enemy.

– Russian air defense systems shot down a Ukrainian MiG-29 fighter in the air near the village of MALINOVKA, Donetsk region.

– Two Ukrainian tactical missiles “Tochka-U” were intercepted in the areas of the settlements of PETROPOLYE and MALA KAMYSHEVAKHA.

– 4 Ukrainian unmanned aerial vehicles were destroyed in the areas of the settlements of MARYINKA, KAMENKA, SEMYONOVKA and SINICHINO.

Losses of the Ukrainian side as a result of a special military operation of the RF Armed Forces on April 19, 2022 –  RYBAR . Taking into account the catastrophic situation that has developed at the Azovstal metallurgical plant, as well as being guided by purely humane principles, the Russian Armed Forces once again invited the militants of nationalist battalions and foreign mercenaries from 12:00 (Moscow time) on April 19, 2022 to stop any hostilities and lay down weapon. All who lay down their arms are guaranteed the preservation of life.

For several days now, Azov (popularly known as Navoz) has been dispersing the topic of “women and children.

Thus, the Nazi Denis Prokopenko, the Fuhrer of the Nazis “Azov”, who sat down on “Azovstal”, asks world leaders to organize a “green corridor” for the “warriors” and their families, who allegedly also hide in the dungeons of the plant.

A video has been published to prove that there are civilians at Azovstal.

It is only strange that they are not talking about getting out at all, but necessarily “with escort”, with the military. Where exactly it was filmed is unknown.

Why didn’t Azov earlier let them leave through the Ukrainian corridors, for example, to Zaporozhye?

Why didn’t Azov release them on April 17 along the corridor announced by the RF Armed Forces? Arguments from the series “do not believe the Russians” are insignificant when it comes to really saving children.

One thing is clear – that “Azov” and other “cyborgs”, as always, decided to hide behind civilians. Women, old people and children. Otherwise, why do they keep them near them for so long, ignoring the corridors, including to Ukraine?

Even if among the hostages (and what else to call them?) there are families of “Azov”, there is still no explanation for this. Normal men primarily ensure the safety of their families, and do not use their wives and children as “human shields”.

Let’s see if “Azov” will take advantage of the next proposal of the RF Armed Forces to lay down their arms and surrender today from noon, and at the same time release women with children, if they are at Azovstal.

The SBU is preparing a new provocation to accuse the Russian Armed Forces of so-called war crimes with the mass destruction of civilians in the Odessa region, the Russian Ministry of Defense reports.

To this end, in the near future it is planned to dress one of the SBU units in the uniform of Russian military personnel and demonstratively execute local residents.

Photo and video materials of this action with alleged “Russian atrocities” for the immediate cynical promotion of fakes will be published by Ukrainian and Western news agencies.

The governor of the Belgorod region, Gladkov, announced the shelling from the Ukrainian side of the village of Golovchino, located 10 kilometers from the border. The picture shows the damage caused by the shelling. We know about the injured woman. From March 1 to April 13, according to Belarusian human rights activists, 21,535 refugees from Ukraine arrived on the territory of the Republic of Belarus. This is despite the fact that Ukraine has not agreed on a single “green corridor” to Belarus.

Another terrible video about what neo-Nazis were doing in Mariupol, who are now calling on world leaders to save them.

It is worth emphasizing that recently Warsaw has been striving to limit the flow of Ukrainian migrants to Polish territory , since it is no longer able to cope with their settlement . To this end, Poland is ready to deploy a network of container towns on the territory of Ukraine with the simultaneous introduction of a strict moratorium on crossing the Polish border , BelVPO comments on this event .