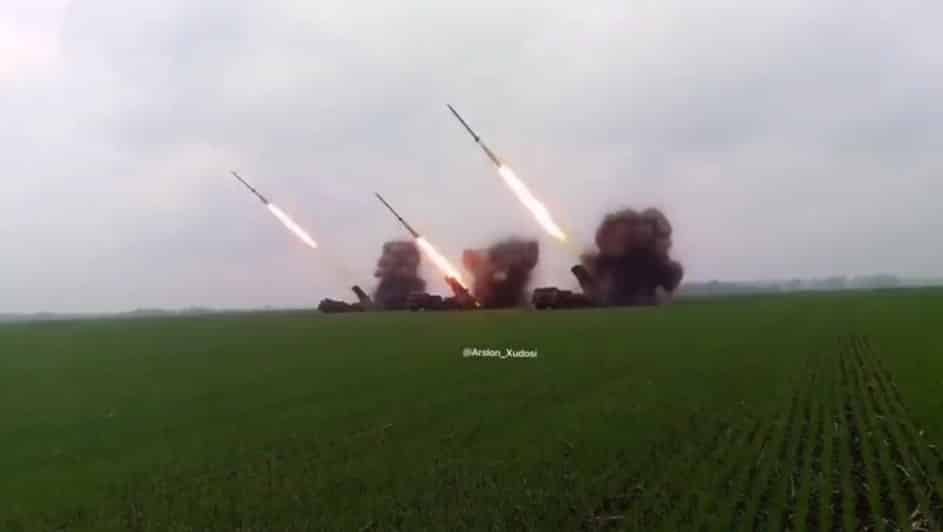 April 18 may mark the beginning of a major Russian offence on the Donbass front lines. The General Staff of the Armed Forces of Ukraine announced that the 2nd phase of the Russian operation in the Donbas, which Moscow announced at the end of March, had begun. In its turn, Russian military officials are yet confirm the claims.

Nevertheless, hostilities have significantly increased, and Russian missile strikes are pounding the territory of Ukraine.

In the city of Mariupol, the mop up operation continues in the large Azovstal industrial plant. Amid the intense bombing of the facilities, DPR and Russian assault groups entered the territory of Azovstal. According to some reports from the area, the northern part of the plant are already under the DPR control.

On the evening of April 18, Azov nazi fighters claimed that civilians are taking shelter in Azovstal. In fact, they have finally confirmed that thousands of civilians, mainly children and women, are used as a human shield by Ukrainian nazis. During the months of hostilities, humanitarian corridors were provided for evacuation from the Azovstal plant almost on a daily basis. The last one was officially closed on April 18.

It is still not clear what will be the tactics applied by the Russian and DPR troops in the Azovstal. The DPR military officials have already declared that there are a lot of means to push the nationalists out from the plant. Today, there are a lot of reports by the media that the Russian FAB – 5000 bombs will be deployed.

Meanwhile in Mariupol, the mop up operations also continue in some areas in the Primorsky district. Shelter of AFU soldiers in the seaport Shelter of AFU soldiers in the seaport

Major developments took place on the front lines near Izyum. Several villages in the Kharkiv region have recently came under the control of Russian forces.

Advance of Russian and LPR forces was reported to the northwest of Izyum. While Kiev officials are claiming the alleged encirclement of the Armed Forces of the Russian Federation near Izyum, the villages of Borovaya, Podliman, Yuzhnaya Zhuravka, Nizhny Zoleny were taken out the AFU control. Clashes continue on the Peski-Radkovskie front line.

On about April 9-10, the forces of the Armed Forces of the Russian Federation moved out of the Kupyansk —Kovsharovka area, clashes broke out on the eastern shore of the Oskol reservoir in the direction of Svyatogorsk — Liman.

On April 11, the villages of Boguslavsky and Pershotravinsky (Pervomaisky) districts were occupied by Russian forces.

On April 13, after a short battle, the district center, the Borovaya settlement, came under the control of the Armed Forces of the Russian Federation. This was officially announced by the local mayor who left the town.

On April 15, the forces of the Armed Forces of the Russian Federation entered the village of Peski-Radkovskie.

The territories to the east of the Oskol water reservoir are of strategic importance as they secure the rear for Russian and LPR troops advancing in the Severodonetsk — Lisichansk region, as well as strengthen Russian positions near Izyum.

The AFU are attempting to counter-attack near Izyum, but to no avail. Fierce clashes continue in the area. Russian forces have recently shot down three Ukrainian warplanes in the area.

The AFU are also active in the Chuguev area, aiming to disrupt the Russian grouping near Izyum.

Meanwhile, to the east of the Borovsky district, the Russian assault on Kremennaya began. On April 18, Allied forces entered the village. This was stated by Sergei Gaidai, who continues to call himself the governor of the Luhansk region. At the same time, he added that the street fighting continues.

Fierce clashes continue in Popasnaya and its surroundings. In the town of Rubezhny fighting continues on the southern outskirts of the city.

To the north of Avdiivka, fighting continues in the Novobakhmutovka area and in the Troitsky area. There is no progress towards New York yet. Avdiivka itself is under heavy shelling. An Ukrainian Su-25 was recently shot down in the area.

The artillery shelling has significantly increased in the south of the Donbass region.

So far, the same sources confirmed the Russian control over the village of Malinovka in the area.

In the other regions, no large-scale offences were conducted by any of the warring parties, positional battles continue.

On April 18, 18 Ukrainian military facilities were destroyed by high-precision air-launched missiles. Among them was the 124th Joint Logistics Support Center of the AFU Logistics Forces command near the city of Lviv. The facility was destroyed along with a large batch of foreign weapons that had arrived in Ukraine from the United States and Europe.

A large ammunition depot was destroyed near the town of Vasilkov in the Kiev region. Two more control points, two positions of the AFU troops and several places of concentration of personnel and military equipment were hit near the towns of Popasnaya, Barvenkovo and Krasny Liman.

In turn, the Russian Aerospace Forces attacked 84 targets. As a result, the Tochka-U tactical missile warhead repair plant in the city of Dnipro, the command post of the local defence battalion near the village of Zelenoye Pole, as well as one fuel storage and two ammunition depots were destroyed.

In addition, 47 areas of concentration of manpower and equipment, along with 22 artillery firing positions of the Armed Forces of Ukraine, were hit.

On April 18, the Russian Ministry of Defence reported that “as of today, the real documented irretrievable losses of the Ukrainian side amount to 23,367 servicemen,” stressing that the data was obtained from Ukrainian secret documents.