April 19th Update: This is a March 14th piece below that did not get published in the crunch of the war news chaos. The couple below were hit by a cluster munition missile in Donetsk City. His lower right leg is blow off just above the knee with a tourniquet on it while holding his wife’s hand, both of them probably dying.

They were cluster munitions strike victims in a non military area. The West, NATO, the US, Biden, the Pentagon… they all have no problem with this, as they silently watched the shelling of the Donbas perimeter for 8 years after the Minsk deal had been signed and did nothing to stop Kiev’s aggression against its ethnic Russian community.

It was timely to run this today, because Kiev, to look tough to its upset citizens, has begun using cluster munitions (which are banned theoretically) in the Bolgorod region of Russia, when it would make better sense to save them for military targets inside Ukraine with the new offensive.

Illegal weapons are being used against Russian civilians out in the countryside, not so much because Kiev wants to show that it can do it, but more importantly that no EU or NATO country political leader will utter a word of protest. It is enhancing Zelensky’s political power, showing he can do this with no blowback on his Western support.

This has long term consequences for all of us, in terms of having to take a very close look at our own democracies to see if we are living in Potemkin villages… JD ]

[ March 14 Editor’s Note: Today’s combat sit-rep follows the kilometer-by-kilometer skirmishes and attrition battles being fought. The nationalist battalions have become a force fighting for themselves it seems. Some civilians have managed to get out of Mariupol, but large numbers remain who will soon be chewing their fingernails for a snack as no relief supplies can get in at this point.

While an improving situation is reported by the liberating forces slowly working their way into the city from the east, by contrast on the west side, where humanitarian corridors going west should be, we see no movement on the current battle maps.

Mariupol’s large population will be out of food at some point. Nationalist forces have been going door to door breaking in and robbing their own Ukrainian citizens of food and money in case they make a break to fight their way out to the West and need to ‘pay their way’.

On the central Donbas front, the Kiev Tochka missile with its cluster bomb warhead slaughtered grandparents doing their daily shopping in Donetsk, a large civilian target to easily bomb.

I had thought the Russian satellites would be spotting Tochka launching pads early enough to destroy them in place, but it seems Kiev has been able to hide them to use now as terror weapons against civilian targets. This will get worse before it gets better. The ‘mopping up’ comment in Mariupol below, is not yet true… Jim W. Dean ]

The most recent developments on the Ukrainian front lines indicated that the technical pause taken by Russian and allied forces has ended. The mass civilian evacuation from the cities in eastern and central regions of the country failed.

Today, in many cities, evacuation is only possible after Russian troops take control street by street. The main battles continue on the Donbass front lines.

On March 14, Russian forces advanced dozens of kilometers more and reached the villages of Vodyanoe, Sladkoe, Stepnoe, Taramchuk and Slavnoe. The UAF were forced to step back to the north towards Maryinka and Kurakhovo.

Russian troops reportedly entered the town of Gulyai-Pole, and clashes continue on the outskirts. Russian troops earlier came to the outskirts of Ugledar, but no offensive on the city was reported. The battles for the city are likely to begin soon. Targets in the town were hit with artillery and rockets.

On March 13, the LPR forces finally advanced on northern outskirts of the town of Popasnaya after several days of fierce clashes in the area. They managed to secure almost the whole town, including the southern and northern outskirts. Clashes continue on the western outskirts.

Control over Popasnaya is an important tactical gain. It is aimed at cutting off of the cities of Severodonetsk and Lisichansk from the southern direction.

At the same time, the grouping of LPR forces near Severodonetsk blocked the city from the eastern and southern directions. Fighting continues on the northeastern outskirts of the city. The main battlefield is the village of Rubezhnoye. The UAF deployed in Severodonetsk and Lisichansk risk to be cut off and the city may be blockaded in the coming days.

Russian and DPR forces are actively expending their zone of control on the southern Donbass front lines. They left no chance to the Ukrainian nationalist fighters blockaded in Mariupol.

The city was blockaded more than a week ago. Ukrainian fighters are already suffering from the lack of supplies. They have to rob civilians, often killing those who do not agree with their actions. 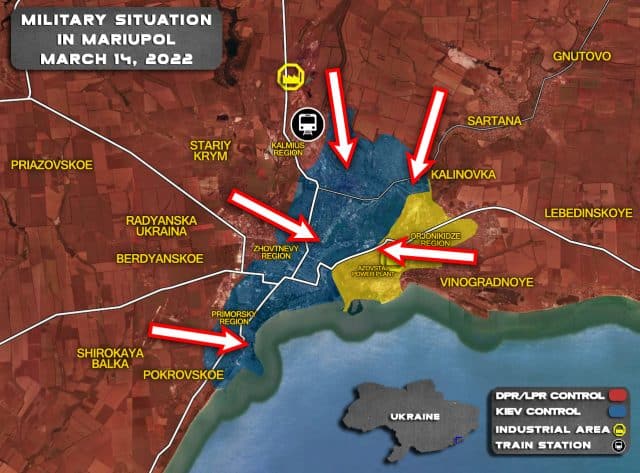 The mop up operations in Mariupol continue. Russian and LPR forces are coming closer to the city center. On March 13, the joint forces of the Russian Federation, the DPR and the LPR have almost blockaded the entire Ordzhonikidze district in the city.

Civilians are trying to escape from the city. A lot of them are rather shot by nationalists or blew up on mines that were planted by Ukrainian soldiers on the roads leading to the city.

At the same time, the situation on the front lines around the city of Donetsk remains stable. Offensive operations of DPR forces in the areas of Marinka, Pisky and Avdiivka were reported. However, no advance has been confirmed so far. The joint Russian and DPR forces are likely not attempting to push the UAF away from the city outskirts, but rather plan to first surround and then destroy them.

Russian forces were also slowed down in the town of Izyum. Clashes have continued in the southern districts of the town for several days in a row. The Russian Army is crossing the Seversky Donets river west of Izyum and fierce fighting continues.

A civilian column moving from Izyum on March 13 was reportedly shelled by the UAF. Casualties were reported.

The Russian Aerospace forces continue pounding UAF military facilities of the all-around Ukraine, including in the Donbass region. Most recently various targets were destroyed in Slavyansk, Kramatorsk, Ugledar, Avdiivka. In response, the UAF continue shelling the residential areas in the city of Donetsk and nearby areas.

Another pinpoint strike hit the Lviv region in Western Ukraine. The Russian precision-guided munitions destroyed the Yavorovsky military training ground of the Armed Forces of Ukraine in the village of Starichi. Foreign volunteers who came to fight for Ukraine were stationed there. For some of them the war in Ukraine ended before it had begun.

So far, 180 foreign militants were reportedly killed in Ukraine. Russia has clearly demonstrated that foreign forces in Ukraine, including form the NATO member countries are yet another target for their missiles and Moscow will not tolerate their willingness to fight for ‘democratic values’ on Ukrainian soil.