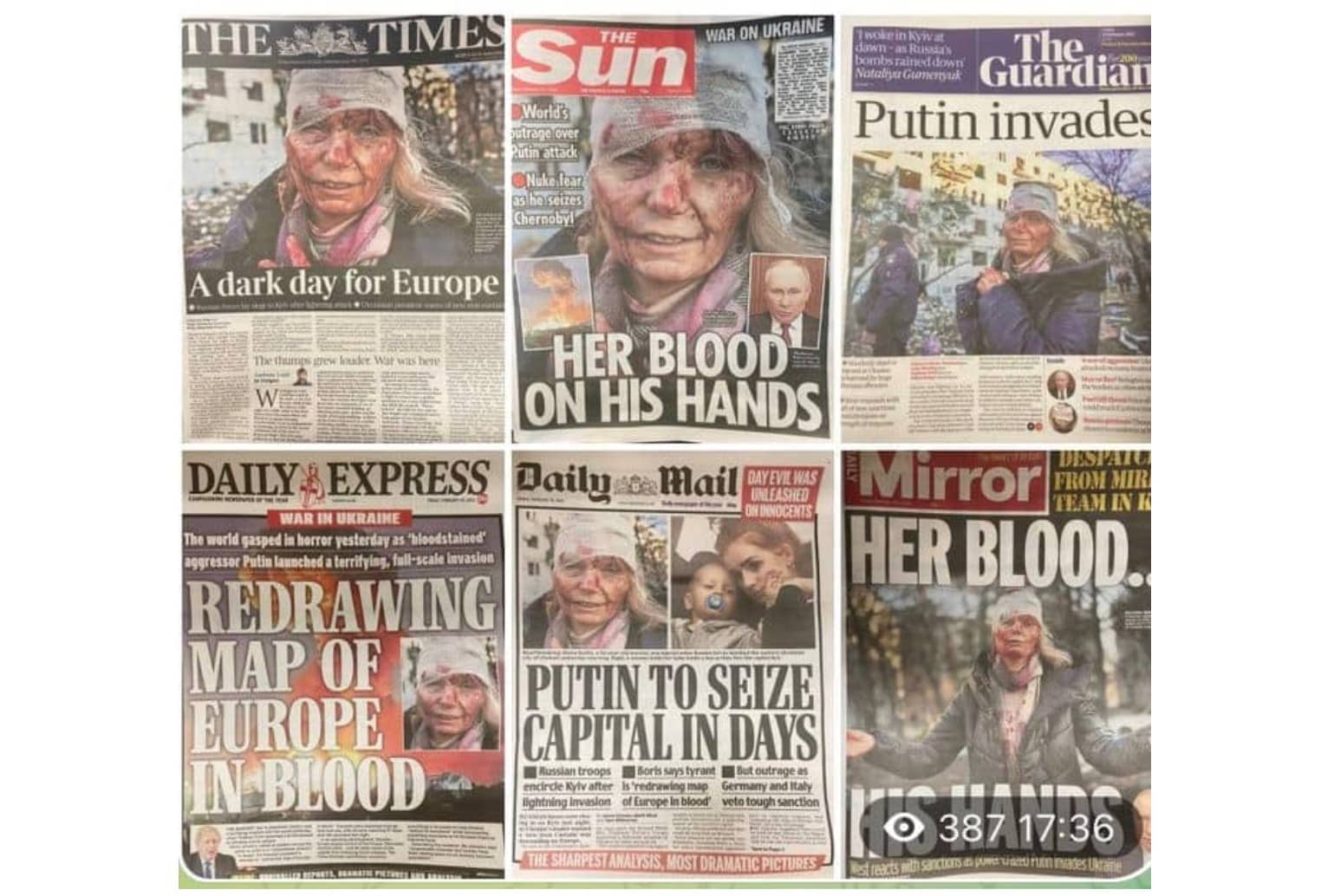 Like most Americans, I am not an “expert” on Ukraine. But enough information has accumulated to form some conclusions based on a “preponderance of evidence.”

The scenario has been depicted in mainstream media as nothing more than an “unprovoked” invasion by Russia. Furthermore, it was a David vs. Goliad match, and nearly everyone loves to root for the underdog.  Putin was a Hitler, a mad dog bent on world conquest; Ukraine would only be his first ambition. Here is how The Economist portrayed him on its cover: 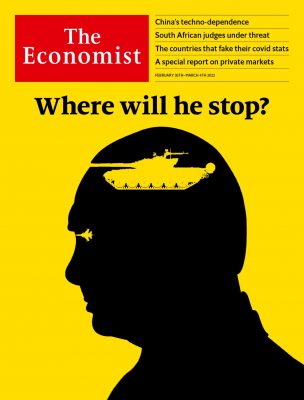 AOL chose to compare him to Stalin: 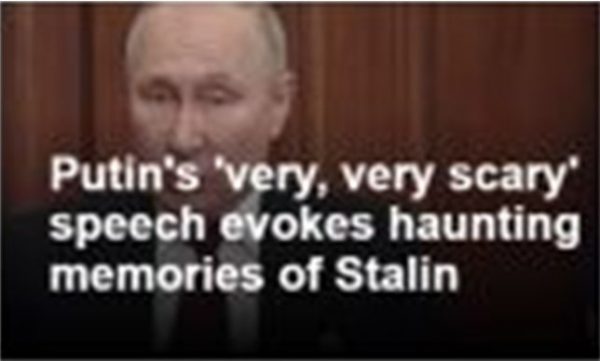 The American government’s response was no less theatrical. As with the media, no attempt was made to actually investigate Russia’s motives or to hear their side of the story. Normally, the first step to take, when another country misbehaves, is diplomacy. But there was no effort to negotiate. Instead, the swift response of the United States and its allies, was sanctions, followed in short order by direct military aid to Ukraine.

As we will see, however:

• Since the CIA-backed coup of 2014, which overthrew the legitimately elected President of Ukraine, Viktor Yanukovych (who had refused loans from the IMF), the Ukrainian government has been a puppet of the West.

Russia’s intervention in Ukraine was justified on several premises:

• When the Soviet Union broke up in 1991, it was assured that NATO would not move further East. But NATO repeatedly broke its promise. Ukraine is now a NATO partner, and was scheduled to become a full NATO member. Since Ukrainian President Volodymyr Zelensky had requested nuclear weapons, this represented a security threat to Russia on its immediate border.

• As now admitted by the U.S., some 30 U.S. biolabs were operating in Ukraine, many working on dangerous pathogens, representing a further threat to Russian security.

• Ukrainian forces were committing atrocities against civilians in Eastern Ukraine, especially ethnic Russians, and the territory of Donbass had formally requested assistance from Russia.

• Russian forces are moving slowly in Ukraine—not because they are weak (as claimed by the U.S. media) but because they want to preserve Ukraine’s infrastructure and are concerned only with confronting hostile military forces, not civilians. But there’s much more. Hang on. This article will consist of text, graphics, and videos; most of the latter are very short (1 or 2 minutes). I have noted the length of each. The overall video content may make this post slow to load for a few people, depending on their device and Internet connection. If a video doesn’t play on the first click, click again.

The West Has a Short Memory: America’s/NATO’S War History

Anyone caught up in the current TV war propaganda should remember what General Wesley Clark revealed he was told at the Pentagon after 9/11. 2 minutes.

In accord with what Clark was told, the U.S. invaded Iraq in 2003, allegedly over weapons of mass destruction, which it turned out did not exist, reminiscent of the 1991 invasion of Iraq that was fought following fake news that Iraqi soldiers were throwing Kuwaiti babies out of incubators. That first war was followed by sanctions on Iraq that resulted in the death of half a million children. And who could forget the former Secretary of State, the late Madeline Albright, telling Sixty Minutes “the price is worth it.” 1 minute.

Despite there being no Weapons of Mass Destruction, the 2003 Iraq War continued for about a decade. The irony here is that, while Russia is fighting on its border, the United States, under false pretenses, was invading a country halfway around the world. Yet, as Candace Owens observes, no one placed sanctions on the United States.

There was also, of course, the 20-year war In Afghanistan, which continued long after the alleged 2011 death of Osama Bin Laden (the pursuit of whom was the war’s original pretext). Then there was NATO’s 2011 massive bombing of Libya, which, until then, had Africa’s highest GDP per capita, highest life expectancy, and a literacy rate of 88 percent.1 NATO’s campaign included backing terrorist insurgents, and the country has been in desolation ever since.

Then there was Trump’s launching of cruise missiles against Syria in 2017 and 2018, based on false allegations that Syrian President Bashar al-Assad had used chemical weapons on his own people. And the supplying of weapons to Saudi Arabia for its merciless war on Yemen, where millions are threatened with starvation. 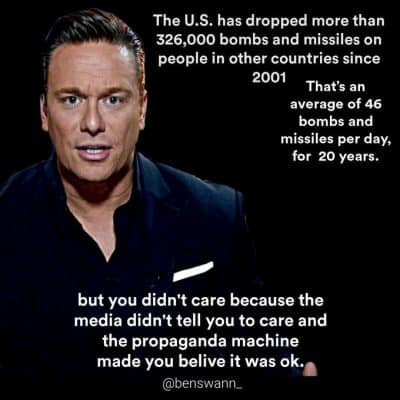 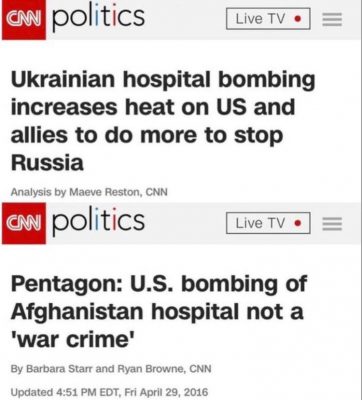 So we are fighting for freedom and to “protect our national security” when we invade and bomb countries thousands of miles and oceans away, yet Russia is “the bad guy” when they intervene in a country on their border.

I gave a public PowerPoint in 2019 summarizing the deceptions which have been used to bring America into wars, going back to the Spanish-American War of 1898.

As Jesus said, remove the plank in your own eye before you remove the speck in someone else’s. (Matthew 7:3-5)

There has always been controversy about Vladimir Putin in the alternative media, as to whether he is a genuine opponent of the New World Order globalists or just another actor in their game.  On the one hand, he did play ball with the COVID narrative, and Russia implemented mask mandates and encouraged (but did not require) vaccination. On the other hand, Russia has been in a Christian revival since the collapse of the Soviet Union in 1991, gay parades and other forms of political correctness are disallowed, and Putin has commented in the past on the decline of Christianity and moral values in the West (remarks we would long to see our own leaders say). 2 minutes. (Remember: You may need to click on a video a second time for it to play.)

Putin explains that NATO, after promising not to expand “one inch” further to the East, has broken that pledge, and that Russia cannot have nuclear weapons posted directly on its borders. He asks how Americans would feel if Russia put nukes on the Canadian or Mexican borders of the U.S.  Also comments on Ukraine being separated from Russia by Lenin. 2 minutes.

In this 2-minute clip, Putin, in a Zoom-like conference, elaborates on Russia’s reasons for intervening in Ukraine, including the abuses of citizens in Donbass (an Eastern portion of Ukraine), Ukraine’s resolve to enter NATO (bringing nuclear weapons to Russia’s border) and the dangerous biolabs. 2 minutes.

In the next video, Putin explains that Donbass had appealed to Russia for help and reaffirms that Russia has no intention of occupying Ukraine. 2 minutes.

Putin addresses rising energy costs in the West: their governments are trying to blame us for their mistakes. 1 minute.

Putin means business. Russia’s reaction will be swift to those who interfere. 1 minute.

Finally, Putin warns Western leaders to back off
of their plan of global depopulation and denounces the lies of the Western mainstream media. I have never seen a Deep State player denounce the depopulation agenda (or, as in the first video above, the decline of our moral values). If Putin is just an actor, I wish we had more such “actors” in the West. 1 minute.

Next, footage from Ukraine you won’t see in the news. A Russian colonel reassures Ukrainian citizens, telling them how to reach safety and aid. 1 minute.

And here Russian soldiers are reported to be giving out humanitarian aid in the liberated Borodyansky district of Kiev. These are cereals, canned meat and fish, confectionery and bakery products, sweets and bottled drinking water. Aid was said to have amounted to about 40 tons at the time of this video.  1 minute.

Russians seize U.S. weapons in Ukraine. This was before the U.S. military aid package that followed Zelensky’s speech to Congress. 1 minute.

The Western media has shown almost no interest in what Putin has actually had to say about the reasons for the Ukraine intervention. His February 24 speech, addressed to both Russians and Ukrainians, has been heavily censored in the West—very possibly because it exposed NATO’s long history of atrocious military attacks. But the full text of the speech, as well as the video of it, can be found on Dr. James Fetzer’s website.  Read more…

Ukraine: Behind the Wall of Propaganda