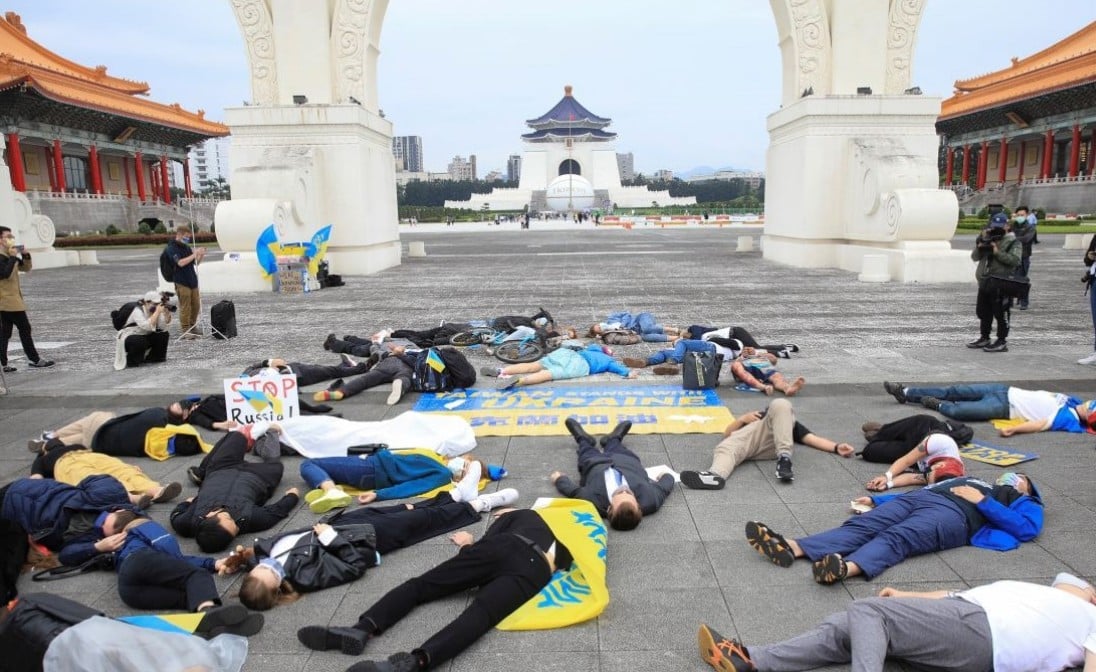 According to Xinhua News Agency, “If you turn on the Taiwanese television, the viewer may believe that the Chinese army has already invaded the island. On the air, the Taiwanese military non-stop repel imaginary artillery strikes and raise their planes into the sky, and the inhabitants of Taipei are urged to prepare for shelling with might and main … Comparing Taiwan with Ukraine, the head of the island administration Tsai Ing-wen in a helmet and bulletproof vest raises the spirit of his military.” .

With even greater zeal in Taipei, they demonstrated their readiness to defend “their democracy” on the occasion of the arrival of American congressmen on the island, including veterans of the anti-China policy Lindsey Graham and Bob Menendez. As a greeting, the Ministry of Defense of the People’s Republic of China conducted large-scale patrols and naval maneuvers in the waters and airspace off Taiwan, with a demonstration landing on one of the islands. And Taiwan’s chief of staff, Tsai Ing-wen, announced: “We look forward to playing an active role in the new Indo-Pacific strategy in cooperation with the United States and other like-minded countries.” This strategy is already being used by the US in Ukraine – by containing Russia. And Taiwan is seen by Washington as “Chinese Ukraine” – to contain the PRC. In response to the US congressmen’s visit, Chinese Ministry of National Defense spokesman Wu Jian said, “China’s People’s Liberation Army is ready for battle and will take all measures to protect the country’s sovereignty and stop any outside interference and attempts to organize the so-called Taiwan independence in the strongest possible way.” .

This suits the Americans: they are ready to pay with the lives of 23 million Taiwanese to contain China.

The island of Taiwan, which lies 150 kilometers from mainland China and became the refuge of Chiang Kai-shek in 1949, Beijing considers its territory. And this is recognized even by the United States, which in 1978 abandoned the security treaty with Taiwan and recognized the island as Chinese. However, about 80% of the world’s production of processors and electronics is concentrated in Taiwan, the Americans need it badly. And where can Washington find another such ally who would be ready to viciously hate the Chinese on the other side of the Taiwan Strait?

And there is another side of the problem. It consists in continuing to fight for the interests of the United States by proxy. This side is addressed, in particular, by former Japanese Prime Minister Shinzo Abe in an article published in the American Project Syndicate .

“For 40 years, ” Abe writes, “the United States tried not to say whether it would defend Taiwan from a Chinese invasion… but now the circumstances have changed… Russia’s invasion of Ukraine has reminded many people of the tense relationship between China and Taiwan… The time has come for the US to make it clear that it will defend Taiwan against any attempted Chinese invasion. There should be no more room for doubt about our resolve towards Taiwan and our determination to defend freedom, democracy, human rights and the rule of law . ” However, the former Japanese prime minister needlessly worries about the US determination to continue fighting. Only this, we repeat, will be an American proxy war. Washington is pumping weapons into Taiwan, as in the case of Ukraine, and at the same time cheating. Much of the weapons for which the United States has already received money never reached the island: 66 F-16 fighter jets for $8 billion, spare parts for Patriot systems for $620 million, plus Stinger and Harpoon missiles for more than $2 billion. However, these are small things compared to the “determination to defend freedom, democracy, human rights and the rule of law” with the hands and lives of the Taiwanese!

That is why Taipei is advised to “use the best Ukrainian experience.” The Chairman of the Joint Chiefs of Staff of the United States, General Milli, even recommended to take a closer look at the national battalions. American instructors are training Taiwanese special forces with might and main.

Under these conditions, Beijing does not close any opportunities for itself. Recall that, despite the growing ice of the “new cold war”, more than a thousand Chinese students continue to study at Harvard (USA). Xinhua is  calling for “broad, deep, frank and open exchanges and dialogues” with the United States to “break the current stalemate that serves no one’s interests . ” This is, if you like, a “soft” Chinese response to the American challenge.

However, China also has a “firm” answer. It is necessary when the flywheel of war is launched in Washington on a new theater of operations, and the technique worked out in Ukraine to shed enemy blood by proxy is being prepared for use in Taiwan.