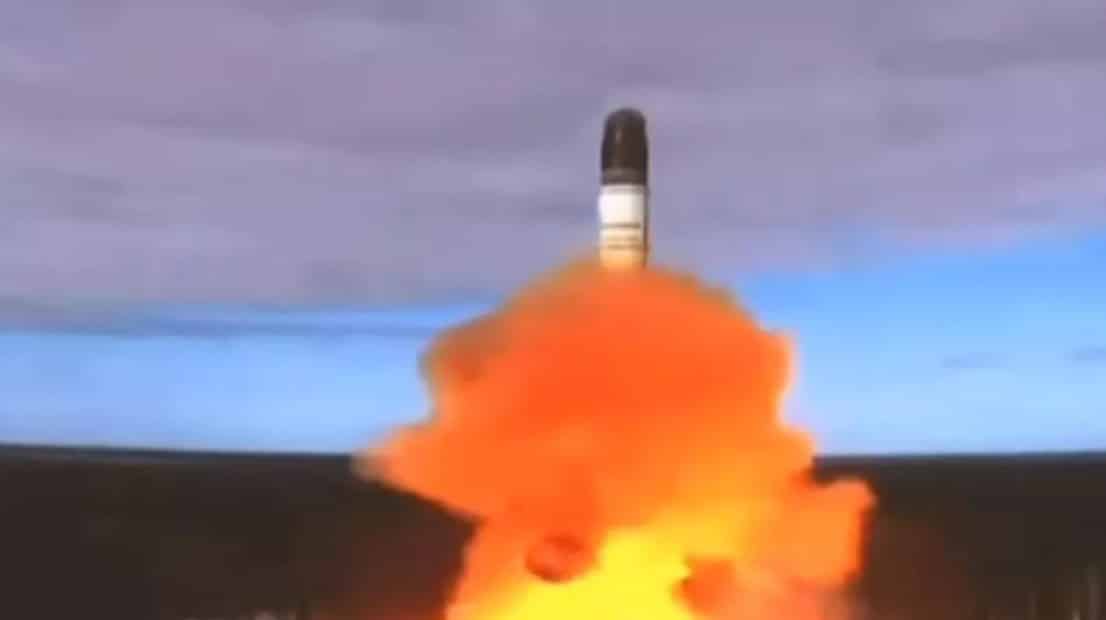 [ Editor’s Note: The Sarmat demo was its initial test required before going into full production. The missile launched, but whether the hypersonic glide weapons can deploy and work as desired will require another test.

That is quite a complicated process which takes time, and made more difficult with Russia’s weapons industry fully tasked right now as you might imagine, going through large quantities of weapons inventory.

So the mention below of this being a game changer must be viewed in the context of only being a concern when they are produced and deployed, years from now.

Russia is doing what it has done before with other weapon systems, and the US has done, putting the technology on display like it did with its testing of its hypersonic missiles. So what does all of this mean for us?

Russia acknowledges the quantity superiority of the NATO pact that allows NATO to ‘mess’ with Russia like it is doing now in Ukraine by feeding Ukraine a steady stream of weapons, which it hopes will weaken Russia. When push comes to shove, Moscow is showing that Western dreams of asset stripping Russia are a wet dream.

If a critical security line is crossed, it can respond with non nuclear weapons that the US does not have, at least not now, or not that we know of. If it were backed into a corner and forced to respond, would the targeted public bearing the pain put all the blame on Russia, or spread it among those of its own country that created the incident in the first place?

High end psyops people are gaming scenarios for such event, to avoid having to face an enraged public that knows it was led to disaster due to the overreach of ‘asset strippers’ in their own country… Jim W. Dean ]

And now the warning from Russia has arrived — the first and immediately successful tests of the newest “Sarmat” missile system. The same one from the magnificent five “Putin surprises” announced in the famous message of 2018.

Get it and acknowledge it. Not literally yet, of course. So far — in the form of a test launch from Plesetsk to Kamchatka. But who needs it in the West, everyone understood perfectly. Or they are about to understand.

They will understand that today Russia has won the Third World War without firing a single shot. No one in the world, including the United States, has an answer to this new super-weapon of Moscow. And this won’t change for at least a few more years.

After all, “Sarmat” is not only able to overcome any existing missile defence systems, but also hit the territory of the United States, for example, through the South Pole. Or any other trajectory that makes their missile defence meaningless.

To “hit” means to wipe out a dozen million—plus cities from the face of the Earth with the warheads of one missile. Guaranteed. No other outcomes. Even tomorrow.

“These weapons will make those who, in the heat of aggressive rhetoric, will try to threaten us think,” Putin popularly explained.

It’s very much in time. And then some in the West, inflated by Ukrainian fakes and their own propaganda, suddenly began to declare that Russia is weak. That its army is good for nothing. That the heroic UAF have already destroyed thousands of Russian tanks and shot down hundreds of planes and are about to move on Moscow.

So, they continued, it’s time for America to intervene — to send not only weapons to Ukraine, but also troops, as Biden’s confidant, US Senator Chris Coons, said the other day. Such is the probing of opinions from Washington.

Now the Americans will come to their senses. They will sit down, count, scratch their heads. And to begin with, they will stop talking without thinking. And there, you see, they will look at Ukraine with a sober look: “We can’t hear you very well, mister Zelensky!”