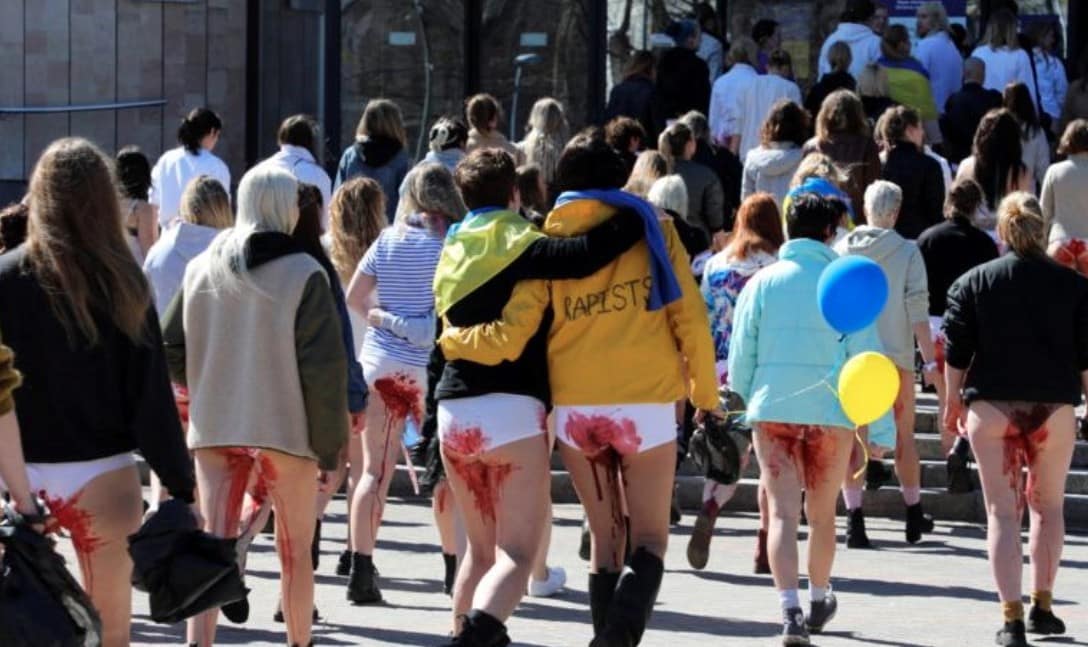 The British Embassy in Latvia allocated money to organize a women’s protest action on April 20 against the special military operation (SVO) of the RF Armed Forces in Ukraine. The ladies were asked to strip down to their underwear and stand in front of the building of the Russian diplomatic mission for 20 minutes. The condition is to paint the legs knee-deep in red. White panties are a symbol of purity, stains and smudges – bloodthirstiness. Several dozens of applicants were found. 30 euros for 20 minutes of “solidarity” in a piercing wind is a good fee for Rigans.

“How low our civilized politicians have sunk by allowing this dirt,” the Lithuanian Catholics were indignant. The hierarchs of the Roman Catholic Church were silent. The tax inspectorate tried to raise the issue of illegal financial activities, but the shout from the Department of State Security (DSB) quickly silenced the fiscals. The agents of the Lithuanian “bezpeka” could not have allowed the sources of financing of the actions organized by them against the “Russian fascists” to be disclosed.

The Balts, dictated by London, protest every day. For example, in Vilnius, near the German embassy, ​​hundreds of “patriotic students” for 20 euros per hour lie on the roadway for weeks, creating difficulties for road users. Boys and girls with posters Scholz kaput ! encourage the German government to supply Ukraine with as many weapons as “Kyiv requires.”

The number of such shares will grow. The parliaments of the Baltic countries banned the holding of mass events that would express support for the policy of the Russian Federation. Only actions in support of the Kiev junta are allowed and encouraged. Riga went further by blocking all network resources with the ru domain so as not to corrupt the population.

Great Britain really wants to pull the Galician-Bandera ideological blanket over Latvia, Estonia and Lithuania. The special services of Albion skillfully exploit the parallels between the post-war (1944-1953) resistance in the Baltic countries and the OUN-UPA * banned in Russia. London, as you know, supported both. Today, they are cherishing plans to revive the “Nazi belt” in exchange for their guarantees of military security for Poland and the Baltic states.

It is important for them that the EU and especially NATO see the mass support of the population for “Ukrainian defenders of Europe and the entire civilized world.” The special services in the performance are assigned the role of orderlies of the society. In particular, in Latvia, from February 24 to April 14, the police initiated 26 criminal proceedings in connection with SVO. This is in addition to the 15 criminal cases that the state security is conducting. A total of 41 trials as of mid-April.

As an example of the hunt for enemies, we can talk about the attack of agents of the Lithuanian State Security Service on the former member of parliament Zbigniew Edinsky. An activist of the “Electoral Action of the Poles” advised official Warsaw to urgently withdraw from NATO and create a single Slavic state with Russia and Belarus. Poland, he said, “will benefit from such a union much more than from a single community with the EU and NATO . ”

The DGB was alarmed: not only did Edinsky, popular in the Polish provinces of Lithuania, go against the mainstream, but he still has access to classified information until March 4, 2023. But the former deputy, perhaps, for a long time “in bed with Russia creates threats to the country’s defense interests . ”

In the Baltics, every potential bearer of an alternative point of view arouses the suspicion of the security services. For example, older teachers: “…perhaps they express support for the Kremlin’s policies.” Is it really so, no one cares, an indirect accusation is enough and the teacher will be fired with a wolf ticket.

In the Baltic States, everyone except the Nazis fell under the hood of the special services. Latvia, Lithuania and Estonia have established themselves in the European Union and NATO as the main producers and exporters of misanthropic ideology. It is based on cave nationalism, the basis of the statehood of the Baltics.

In Lithuania, the Nazis Mindaugas Murza, Marius Kundrotas, Kristupas Krivickas, Vytautas Radzhvilas, Audrius Butkevicius, Richardas Chekutis and other Fuhrers bleached by the authorities are publicly plotting to dismember multinational Russia into ethnic shreds. “The disintegration of the Russian Federation has become a fixed idea for the Nazis, ” emphasizes the underground opposition network publication bukimevieningi (Let’s Be Together).

“Such a global project is extremely relevant … as one of the ways to save Ukraine from the victory of the invaders. The civilized world is obliged to set a single goal – the absolute disintegration of Russia. It is necessary to split it into pieces, otherwise all normal countries are doomed to live in constant torment, ”the Lithuanian official press is not ashamed to quote the revelations of the fascists Butkevicius and Chekutis. She is proud that the Lithuanian Nazis support the Ukrainian ones. In March, journalists talked about “heroes” who left for Ukraine “to hunt Russians for free.” True, the news about the dead has noticeably cooled the excitement, the number of people wishing to participate in the “safari” is running out.

The state media are purposefully declaring Americanism and Russophobia. They  are delighted with the “soldiers of Azov, banned in Russia, going to their deaths” *, with the Ukrainian actress who called for violence against Russian officers of the Armed Forces of the Russian Federation (meaning the video in which a girl with low social responsibility, after misanthropic statements, cuts with a smile man’s throat). The advertisement was filmed in imitation of the propaganda of the Islamic State (the organization is banned in Russia, but not in the Baltics). Calls “Cut Rusnya!” became a roadmap for local swastika lovers. The more aggression, the worse things are for Bandera.

The Balts, primarily among those who secretly sympathize with Russia, are seriously afraid for their lives.