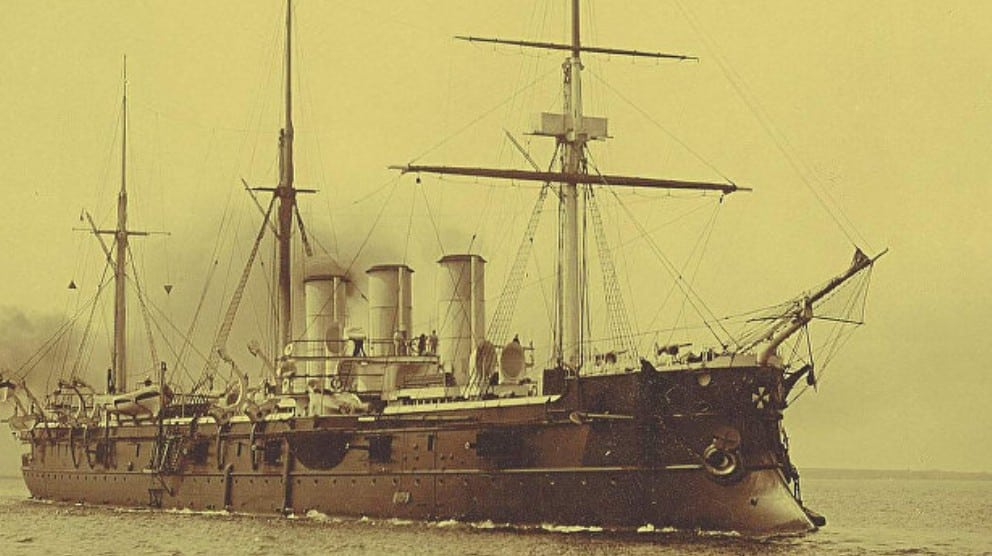 In 1827, the Russian battleship Azov distinguished itself in the battle of Navarino with the Turkish-Egyptian fleet, defeating five Turkish ships. For that feat, the ship received the stern St. George’s flag, and after it was dismantled in 1831, a tradition appeared in the Russian imperial fleet to include the ship “Memory of Azov”

There were three such ships: two sailing battleships, and then the armored cruiser “Memory of Azov”, which carried the stern St. George flag of their predecessor. After 1917, the tradition died out, the Red Navy did not support it.She had a chance to be revived in our time, when the best traditions of the Russian army and navy of all time are being restored. But after 2022, its revival is very doubtful (at least in the near future). For too many people, any memory of the Azov today will evoke associations not with the heroic ship, but with the Nazi regiment Azov, which is being finished off in Mariupol.

Now it doesn’t matter how many more hours, minutes or even days the unfinished Nazis will sit in the cellars of Azovstal. It doesn’t matter how many foreign mercenaries are with them in reality (a few or hundreds). It doesn’t even matter if there are high-ranking officers from NATO countries, as some patriots fantasize, for some reason they believe that such a prize could be a serious help bringing our victory closer.

Let me remind you that the victory at Stalingrad became the most important contribution to the Victory, not because the commander of the 6th German Army, who was average in his abilities, General Paulus , was captured there, a day before the capture he received the rank of field marshal from  Hitler (the only field marshal in German history, who received his rank for a catastrophic defeat), but because of the loss of almost three hundred thousandth group of experienced soldiers by the Wehrmacht, despite the fact that the total losses of the German army in the battles near Stalingrad exceeded a million people.

It was precisely these hundreds of thousands of trained and fired soldiers that were not enough for Hitler on the Kursk Bulge to seize the initiative in the conduct of hostilities again and then were not enough until the end of the war. By the way, out of about a million soldiers who passed through the Sixth Army during the Battle of Stalingrad (August 1942 – February 1943), several thousand retreated as part of the rear institutions, about forty thousand at the time of the encirclement ended up in hospitals or were taken out of the boiler by aircraft. Seventy-two thousand surrendered. Of these, only seven thousand returned alive after the war, since most of those who surrendered were in a state of extreme exhaustion and frostbite (they simply could not be saved). Thus, the surviving soldiers of Paulus remained about fifty thousand, and the total irretrievable losses of the army amounted to 95% of the entire personnel,

Hitler’s propaganda actively used the “tragedy of the 6th Army” to spread a sense of loyalty to duty among the troops and the population. Apparently, the American owners of the Kiev regime and their local puppets planned to use the Azov regiment and the marines who fought alongside it in a similar way. Like the 6th Army of the Germans, they were informally considered the elite units of the Armed Forces of Ukraine and were indeed the best trained and equipped. At the same time, it was clear that there were too few of them to radically change the situation at the front. But in residential areas and the industrial zone of a large city, they could resist for a long time.

Their resistance fettered a significant part of the Russian group, preventing the development of the operation in Zaporozhye and Pavlograd. And their “heroic death” was supposed to form the basis of the legend about the “nationwide resistance” of Ukrainians to “Russian aggression”. Mariupol was supposed to become more important for Ukraine than Thermopylae was for Greece, and the Azov and Marine Corps were supposed to play the role of not three hundred, but five or six thousand local “Spartans”.

The Ukrainian national legend is constantly striving for the numerical and qualitative superiority of Ukrainians. It declares the appearance of ancient Ukrainians before the Neanderthals arose, their prominent role in terraforming (they dug the Black Sea and poured the Caucasus Mountains), their significance as cultural heroes of all mankind (they gave people a plow, wheel and fire). Even God (Jesus Christ) and Buddha who reached absolute perfection, according to the Ukrainian legend, were Ukrainians. But the same legend claims that more Ukrainians died from the Holodomor, dispossession of kulaks, and during the Great Patriotic War (from each of the listed cases separately) than Jews as a result of the Holocaust. No wonder

In general, Kyiv and Washington considered two options for ending the Mariupol epic. The first is the exit of the remnants of the garrison along the humanitarian corridor, which would then be declared a heroic breakthrough. The second is the death of a garrison under bombs in the cellars of Azovstal (similar to the legend about the death of “cyborgs” at the Donetsk airport). Both cases fit perfectly into the newest military legend of Ukraine: about how a handful of heroes smashed the hordes of “Muscovites”, defending their country, and at the same time Europe and the world.

Mass (hundreds and thousands) surrender was not envisaged. Such an outcome of the “battle for Mariupol” will have a disintegrating effect on the rest of the Ukrainian troops. Therefore, the entire garrison was inspired that the Russians and the troops of the DPR did not take anyone prisoner, but terribly tortured and killed on the spot everyone who was not lucky enough to fall into their hands. Given their own experiences with the population of the DPR/LPR territories occupied by Kyiv, the Azov and Marines believed that they would be treated the same as they were treated, if not worse. That is why the Marine Corps only surrendered when they ran out of ammunition and food: the lust for life was stronger than the fear of responsibility.

The “Azov” people, who have large reserves and more reliable shelters, refused to go out without weapons through humanitarian corridors into captivity (no one was going to let them go). Now they are being finished off, but there is reason to believe that in the near future they will realize the futility of resistance and will try to save their lives by surrendering. If Kyiv did not come up with any plan for this case (for example, auto-detonation of shelters, with the statement that it was Russia that bombed them with a particularly powerful weapon) and did not find a fanatical performer to implement it, then from 1.5 to three thousand people can surrender. This means that the legend about the Ukrainian Spartans will die without being born, and the captured “Azov” and marines can be used at the front of the cauldron closing around the Donbass group, so that they convince their “brothers” that it is much better in captivity,

If the Donbass group, under the influence of the captured “Azov”, begins to crumble and surrender en masse, then this will dramatically speed up the course of the operation and minimize the losses of Russian troops, which, in turn, can lead to a strategic change in favor of Russia in the global balance of power. Thus, the surrender of the “Azovites” who have settled on Azovstal will give Russia two significant advantages:

• the destruction of the Ukrainian military-political legend around which Kyiv and Washington are the “Ukrainian nation”;
• a sharp acceleration in the defeat of Ukraine, coupled with minimizing its own losses, which should weaken the will of the West to continue the proxy war on Russia’s western borders.

But this is not the end of the matter. Years will pass, and the surviving Bandera will again glorify the “Mariupol seat”, tell their grandchildren legends about the Azov regiment that heroically died to the last man and its staunch “brothers” from the Marine Corps. Then there will be “scientists” who will have “their own view” on the events of many years ago, as some Russian (not only Ukrainian) scientists now have “their own view” on Mazepa. Gradually, a legend will develop, and around this legend, though not a nation, but a sect of dangerous separatists.

Therefore, the memory of the Azov regiment should disappear immediately after the end of hostilities. Any mention of him should be banned (to expose the atrocities of the Ukrainian Nazis, it is not necessary to mention a specific military unit, we do not mention the numbers and names of the Bandera hundreds that committed crimes in Western Ukraine in the 40s and 50s). Moreover, for the moral discrediting of Ukrainian Nazism, the Shakhtyorsk battalion (reorganized into the no less disgusting Tornado), which operated in 2014 and consisted entirely of criminals, perverts and moral freaks, is much more suitable, whose servicemen were sent to prison for war crimes even Ukrainian authorities (it doesn’t matter how they were expelled from the “Gestapo” for cruelty).

Perhaps in the future we will be able to restore the memory of the officers and sailors of the battleship “Azov” who fought heroically in the Battle of Navarino for the freedom of Greece, but the memory of the failed “heroes” from the cellars of “Azovstal” should definitely be buried in its ruins. Nazi Ukraine does not and cannot even have a hint of heroes. The memory of them must die, just as the memory of the Norwegian and French collaborators from the “national” SS divisions died, who defended Hitler’s bunker to the last even after his death.