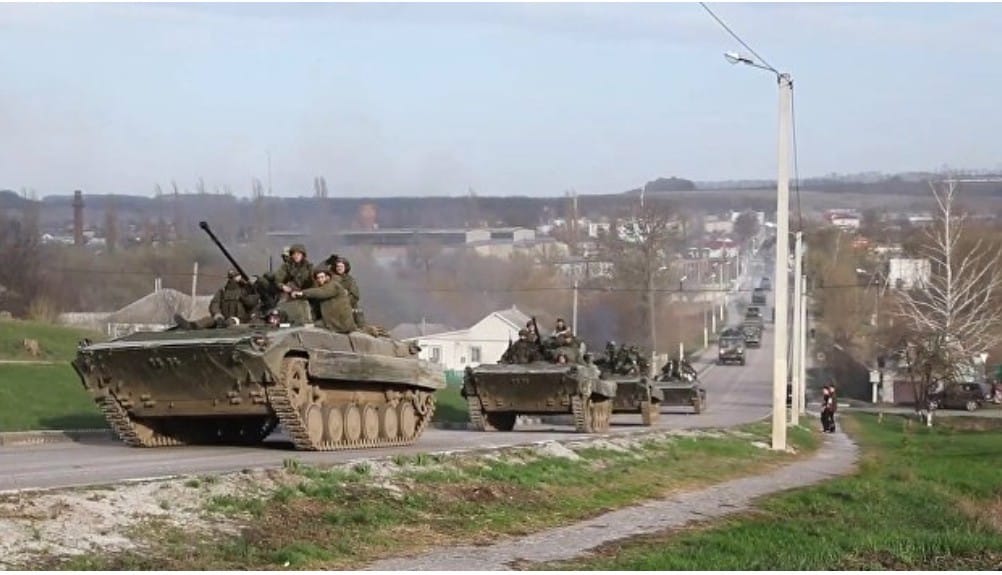 The Acting Commander of the Central Military District, Major General Rustam Minnekaev, named the goals of the second phase of the special operation of the RF Armed Forces. Secretary of the National Security and Defense Council of Ukraine Oleksiy Danilov said that in the near future the world could expect a big war.

Words about the goals of the second phase of the special operation were heard at the annual meeting of the Union of Defense Industries of the Sverdlovsk Region.

“Since the beginning of the second phase of the special operation, it has already begun, literally two days ago, one of the tasks of the Russian army is to establish full control over the Donbass and southern Ukraine.

This will provide a land corridor to the Crimea, as well as influence the vital facilities of the Ukrainian [armed forces], Black Sea ports, through which agricultural and metallurgical products are delivered to the countries [of the world] ,” he said. about. commander.

He also noted that control over the south of Ukraine is “another way out to Transnistria, where there are also facts of oppression of the Russian-speaking population.”

“ Apparently, we are now at war with the whole world, as it was in the Great Patriotic War, the whole of Europe, the whole world was against us. And now it’s the same, they never loved Russia ,” Minnekaev said .

“ When delivering strikes, the Russian Armed Forces do not suffer any losses. This most of all kills the morale of the personnel of the Armed Forces of Ukraine. The technical superiority of the Russian army on land, at sea and in airspace has become evident ,” he said.

Minnekaev stressed that all the assigned tasks of the special operation would be fulfilled.

For words and about. the commander of the Central Military District reacted to the head of the Office of the President of Ukraine Andriy Yermak .

“ We have our own scenarios for protecting Ukraine. Many of Moscow’s plans have already been destroyed by the work of our army and people ,” he said.

Meanwhile, Ukrainian journalist Yuriy Butusov accused the country’s authorities of the failure of the defense in the southern direction. According to Butusov, it is the President of Ukraine Volodymyr Zelensky who is to blame for the situation in Mariupol.

Later, State Duma deputy from Crimea Dmitry Belik said in a commentary to RIA Novosti that after a special operation in Ukraine, the Crimean Federal District could be formed, the inhabitants of which would be citizens of the liberated territories.

“ No matter how neo-Nazis and their Western curators try to rewrite history now, they will not succeed, and historical justice will prevail. The Crimean Federal District can be recreated, and its population will be residents of the liberated territories of Ukraine, which historically belonged to Russia ,” Belik said.

According to him, during the reign of Catherine II, the borders of the Russian Empire expanded significantly, new settlements and cities were created.

“ Mariupol was founded thanks to Catherine II, initially its population was Greeks and Armenians, resettled by the Empress from the Crimea, which was not yet Russian at that time ,” he said.

Also, according to Belik, the renaming of cities founded in the Russian Empire or the demolition of monuments in them “ will not allow the destruction of historical and spiritual bonds that can unite people who despise Nazism .”

Earlier, the head of the regional national-cultural autonomy of the Crimean Tatars , Eyvaz Umerov , proposed restoring the Crimean Federal District (KFD) in order to integrate the territories of southern Ukraine liberated from Ukrainian nationalists into the Russian economic space.

Waiting for the big war

The Secretary of the National Security and Defense Council Danilov said about the upcoming big war in an interview with Ukrayinska Pravda .

He stated that the Ukrainian military-industrial potential is very important in this regard.

“ There are few countries in the world that have such opportunities. Another thing is that we must systematize all this and build on such a powerful foundation so that it all works as coordinated as possible for the benefit of the state , ”said Danilov.

At the same time, he acknowledged the existence of a number of problems in Ukraine.

“ We have certain problems at the legislative level, when the legislator determines what should be in the army. What do they have to do with it? This is what Mr. Pashinsky did in his time under  Petr Alekseevich [ Poroshenko ]. The military must develop an order, the state must provide this order. And what the military ordered must be the most modern, of high quality and in sufficient quantity. Then it will be a victory ,” Danilov emphasized.

On Friday, April 22, Danilov’s other big interview came out – to the publication ” Suspilne “. In it, he stated that Ukraine urgently needs to be de-Russified.

“ There was a total Russification of our country. And if we do not get rid of this Russification in all spheres of our life now, in 10-15-20-30 years we can get the same war with Russia. There is no need to live here with some dreams. This is a fundamental issue for us, the issue of our survival, the survival of our country ,” Danilov emphasized.

Under Russification, he also understood the presence in Ukraine of business from the Russian Federation.

Despite the fact that Danilov expects a big war with Russia and the world as a whole, he does not trust the Ukrainian military. Thus, the Secretary of the National Security and Defense Council of Ukraine stated that Russia, in the event of the capture of Kyiv, would allegedly appoint not anyone else to lead Ukraine, but the Ukrainian military.

“ After they dreamed that they would occupy our country in 2-3 days, some people with big shoulder straps with honor and conscience should have headed the government, all our institutions were Ukrainian military of the highest level ,” Danilov emphasized.

He did not name the soldiers. As he did not tell what happened to these military men now.

“ It would be surprising if someone [from Russia] led us here. And when stuffing that Tsarev will lead here , some other people – no, these are people who had and have citizenship of Ukraine and have big stars on their shoulder straps – so far , ”said Danilov.

However, while the authorities are in no hurry to touch the owners of big stars on shoulder straps. Although all the mechanisms for this exist. Moreover, Zelensky had previously stripped some military personnel of their general ranks.

“ Today, another decision was made – on antiheroes. I don’t have time to deal with all the traitors today. But gradually they will all be punished. Therefore, the head of the internal security department of the Security Service of Ukraine Naumov Andriy Olegovich and the ex-head of the Security Service of Ukraine in the Kherson region Krivoruchko Serhiy Oleksandrovych are no longer generals , ”President of Ukraine Volodymyr Zelensky said on the night of April 1 .

He also threatened other Ukrainian servicemen.

“ Those senior military officers who were prevented by something from deciding where their homeland is, who violate the military oath given to allegiance to the Ukrainian people to protect our state, its freedom, independence, will inevitably be deprived in accordance with Article 48 of the Disciplinary Charter of the Higher Military ranks. Random generals are not going along with us in the future ,” Zelensky said.

Most likely, the “military conspirators” are a figment of Danilov’s own imagination. However, even if the Ukrainian authorities do not trust their generals, they are in no hurry to remove them from their posts and deprive them of their ranks.

The first reason for this is the suicidal nature of such a step for the Ukrainian defense. The second reason may indeed be the belief in the coming big war.

SOURCEUkraina.Ru
ATTENTION READERS
Due to the nature of independent content, VT cannot guarantee content validity.
We ask you to Read Our Content Policy so a clear comprehension of VT's independent non-censored media is understood and given its proper place in the world of news, opinion and media.