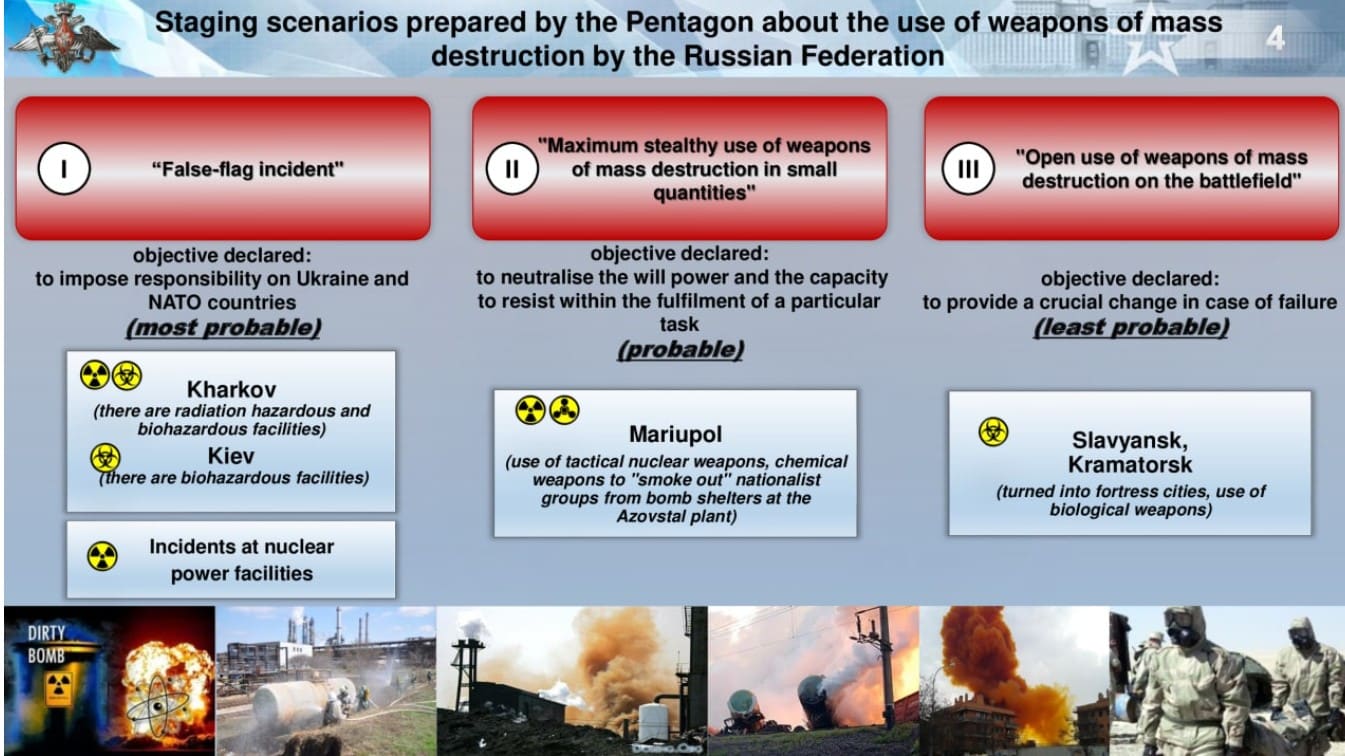 There are three scenarios to be applied in order to accuse the Russian Federation.

👉 The first one is a ‘staged incident under a false flag’ that is the most probable.

👉 The second one refers to a ‘Maximally covert use of weapons of mass destruction in small volumes’ for neutralising the will power and the capacity to resist within the fulfilment of a particular operational task.

👉 The third and the least probable one is the ‘overt use of weapons of mass destruction at a combat area’.

The Ministry of Defence of the Russian Federation possesses the information related to the preparation of provocations by the United States of America in order to accuse the Russian Armed Forces of using chemical, biological or tactical nuclear weapons. This plan has already been developed and represents a response to the success of Russia in conducting the special military operation.

▫️Only in March and April senior officials of the Western countries have been making regular provocative ‘warning’ statements. The mass media propagate the points about the possibility of using weapons of mass destructions by Russia.

▫️For example, the National Security Advisor J.Sullivan has commented on Biden’s words that the USA “in kind” to the possible use of weapons of mass destructions by our country. And on February 27 the American permanent representative to the UN Greenfield announced an intention of Russia to use any instruments ‘under a false flag’, including chemical and biological weapons for intimidating the Ukrainian population and the international community.

▫️Against this background, the US State Department considered positively the transfer of up to 400 sets of personal protection equipment, 390 NBC reconnaissance devices and 15 ‘Stryker’ reconnaissance vehicles.

Staged use of WMD is aimed at accusing Russia of using prohibited weapons with the subsequent implementation of the so-called «Syrian scenario», in which the state is subjected to economic and political isolation, as well as exclusion from international organizations, including the UN Security Council.

▫️A possible way forward is to put pressure on the countries loyal to and friendly to the Russian Federation, including India and China, to compel them to impose sanctions on our country.

❗️We would like to recall that the Russian Federation completely destroyed its chemical arsenal on September 27, 2017, which is confirmed by an OPCW certificate. In turn, the United States, with its strong financial, economic and technical potential, is the only country party to the Chemical Weapons Convention that still possesses an impressive arsenal of chemical warfare agents (672.5 tons).

▫️CIA Director Burns’ statement about Russia’s possible use of tactical nuclear weapons is absurd. With the current level of technical equipment of the international nuclear test monitoring system, it is impossible to conceal the use of such weapons. If the CIA director does not understand this, then he is either unprofessional, or he is being misled.

▫️The biological weapons programs in the USSR were completely phased out in 1972. At the same time, the number of U.S. biological laboratories is incomparable to other countries. According to the Chinese Foreign Ministry, Washington controls 336 laboratories in 30 countries, which is of great concern.

To date, the United States is the only state in world history that has used all three types of weapons of mass destruction.

▫️The dropped nuclear bombs during the Second World War on Hiroshima and Nagasaki, the use of toxic chemicals in Vietnam and Iraq – all these crimes were not properly assessed by relevant international organizations.

❗️Thus, in an attempt to discredit the special military operation of the Russian troops, the Kiev regime, at the suggestion of the American administration, is able to implement scenarios in the near future that will lead to the death of tens of thousands of Ukrainian citizens and cause an environmental and humanitarian catastrophe.

The various posts on the Mod Telegram channel starts here:

SOURCEThe Saker
ATTENTION READERS
Due to the nature of independent content, VT cannot guarantee content validity.
We ask you to Read Our Content Policy so a clear comprehension of VT's independent non-censored media is understood and given its proper place in the world of news, opinion and media.