“The continuation of the Security Council’s current stance has only encouraged and emboldened the Israeli regime to perpetuate its occupation and crimes against the oppressed Palestinian people,” Takht-e Ravanchi said, addressing a meeting of the UN Security Council on Monday. 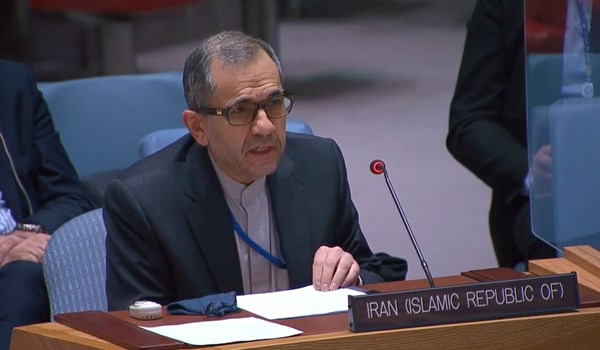 “The current worrying trend must be tackled immediately and seriously. To prevent a catastrophe with far-reaching implications, the historical and legal status of this sacred place must be protected under international law,” he said.

“We call on the international community to take precautionary measures to protect al-Aqsa Mosque, including its cultural heritage, from attacks by Israeli occupying forces and extremist settlers,” Takht-e Ravanchi added.

Iran’s UN ambassador said the crimes of the Zionist regime against the Palestinian people are completely documented and undeniable, adding that they are considered war crimes under international law and the perpetrators must be brought to justice without further delay.

Stressing that the full recognition of the inalienable rights of the Palestinian people is a prerequisite to the resolution of the conflict, Takht-e Ravanchi called on the Security Council to hold Israel accountable through all legal means at its disposal.

Referring to the recent crimes of the Israeli regime in the occupied Palestinian territories, he said the situation there has worsened with the continuation of Israel’s racist policies and brutal crimes against the Palestinian people.

“The Israeli regime has committed its crimes before the eyes of the international community and knows very well that it will not face any consequences,” the Iranian diplomat noted.

Takht-e Ravanchi censured the recent Israeli attacks on al-Aqsa Mosque during the holy fasting month of Ramadan, saying any desecration of Muslim sanctities and hurting the feelings of Muslims around the world is disgusting and should not be tolerated.

Israeli forces have repeatedly attacked Palestinian worshipers at the al-Aqsa Mosque compound site since early April, with the onset of the holy month of Ramadan which coincided with Jewish Passover.

More than 150 Palestinian worshipers were injured when Israeli forces stormed the compound in the holy occupied city of al-Quds’ Old City last week. The forces have kept up their violations on the flashpoint site besides cracking down on solidarity protests throughout the occupied West Bank.