[ Editor’s note: I had not realized that electric trains were widely used in the Ukraine regions. My first notice came with the shocking story of how saboteurs in Belarus had wreaked havoc on the Russian supply trains supporting the Kiev operation.

The trick there is the switching stations, which are controlled electrically. If you knock those out, you have defeated the fastest way to move heavy supplies. It seems amazing that they were not guarded, but that is Monday morning quarterbacking.

When we had heard that Putin had replaced a number of generals over the Kiev campaign, the news had the disinfo smell on it, but maybe not now, with this new info.

The Russians were quick to learn from the mistake. Their own substations are well guarded now, and their revenge was to take down the railway substations in Western Ukraine, and for the cherry on top, they took out the only rail bridge from Romania.

The Russian wargames I suspect have made a wargaming note of “destroy the railway switching stations on the first day of hostilities”.

Western media has seen a steady stream of doom and gloom stories about Russian operations not proceeding at a ‘Rommel in North Africa pace during WWII’. The real reason of course was that the inhabitants of Donbas are Russian speaking, and the Russian generals’ wanted to minimize casualties on the people, its troops, and infrastructure… Jim W. Dean ]

On April 26th, the Russian cruise missile hit a railway bridge over the Dniester River in the village of Zatoka in the Odessa region. As a result of the strike, the railway track was damaged.

This is the only bridge that connects Odessa with the western part of the region and Romania. The destruction of the bridge will significantly complicate any transfer of weapons from Europe to Ukraine, as well as a possible advance of foreign troops in the region.

The blows were inflicted on substations, without which electric trains cannot move. Railway communication in Western part of Ukraine was paralyzed. About 2 dozen passenger trains were delayed. By lunchtime the Ukrainian Railways services reported that they had managed to localize the problem. However, freight traffic was still stopped.

The vast majority of transportation in Ukraine is carried out by electric traction. As of 2020, there were more than 1,600 electric locomotives in Ukraine, and only 300 diesel locomotives. 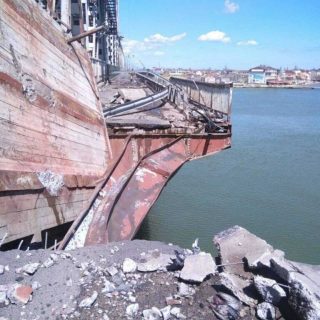 Today, the bulk of military transportation of the Armed Forces of Ukraine is carried out by rail, which is much faster and cheaper than mobile transport, especially given the shortage of diesel fuel throughout the country.

Paralyzing the Ukrainian railway transport, the Russian military command achieves the main task to paralyze the strategic transfer of the Armed Forces of Ukraine, which is extremely important given the escalation in the Donbas and in the south of Ukraine.

If the strikes on electrical substations continue, 1,600 Ukrainian electric locomotives will not be able to move. They can only be replaced with the remaining 300 locomotives. At the same time, some part of the railway transport has already been taken out of service by Russian troops in the territories under their control, including in the Donbass, Kherson, Kharkiv and Chernihiv regions.

Moreover, Kiev’s Western partners also cannot help with the supply of European trains, since the track gauge in Ukraine differs from the European one.

If Russian missiles continue to strike at substations of Ukrainian railways, this will be able to significantly reduce the supply of weapons and manpower to the Armed Forces of Ukraine on the front line.