[ Editor’s Note: The US tightrope walk with its China policy continues. As John Mearsheimer has covered over and over in his interviews, China is the US’ only peer competitor, and hence he thought the war with Russia using Ukraine as cannon fodder to be a huge inappropriate waste of resources that should be saved for China.

This is a tricky concept to get one’s head around. The US and NATO still hugely dominate China’s military power. But that will slowly change, as China has the economic engine now to drive its domestic economy and divert necessary resources to build a credible military to eventually protect itself from the US.

That is why countries with large enough economies rushed into building nukes as quickly as they could to have a credible deterrent. On the seas, the US Navy roams where it wants, and a peer level counter navy would take a generation, or two, to build.

We see China, to a degree, following Russia’s act of focusing on technology for state of the art weapons, quality versus quantity. And the term ‘mini-nukes’ is no longer whispered anymore. VT published the history of them, and their use as reasonable options for using the big ones, until they also began to be used, disguised as truck bombs or ammo dumps going up.

Here we are with an arms race rolling on, which to a degree is a no win situation for countries, because there is no end to having enough, but certainly a win-win for their domestic defense industries.

For example, the Ukraine war has been a Santa Claus come early for Western countries having cleared inventories of conventional weapons, which have to be quickly replaced with new orders, where in the US situation, this is done with endless borrowed money that no one expects to ever be paid.

If anyone sees any possible good outcome from this insanity, please share it in the comments… Jim W. Dean ] 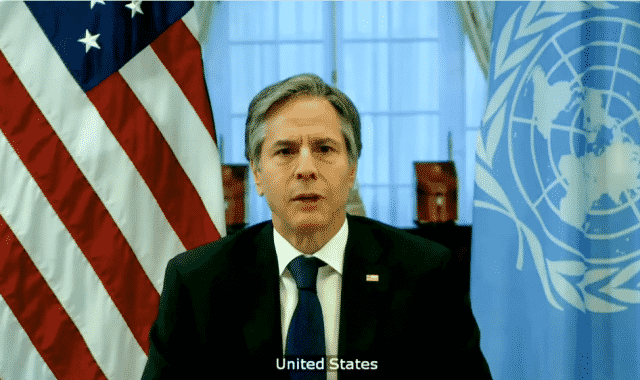 Secretary of State Antony Blinken will make a long-awaited speech outlining the administration’s China strategy Thursday in Washington, a person familiar with the plans told POLITICO. But don’t expect anything bold.

…The upcoming speech will kick off a month of intense administration engagement with Asia, including next week’s U.S.-ASEAN Special Summit in Washington, Biden’s trip to South Korea and Japan and the first in-person meeting May 24 of leaders of the Quad, including Japan, India and Australia.

The administration’s challenge is to ensure buy-in for the strategy — which hinges on building and reinforcing alliances and partnerships in Asia and beyond — to counter U.S. perceptions of China’s growing diplomatic, economic and military influence undermining Biden’s conception of a “rules-based international order.”

…“The China Strategy is basically ‘Trump-plus with sophistication’ but with partners and allies,” said a China expert familiar with the strategy’s contents who asked for anonymity in order to speak freely.

… “Our relationship with China will be competitive when it should be, collaborative when it can be, and adversarial when it must be,” Blinken said in March 2021.

Biden outlined his overarching vision in his first speech to Congress a year ago. “We’re in competition with China and other countries to win the 21st Century,” he said to a standing ovation.