Dear US/NATO officials, This is from a French TV interview with a former NATO French officer, that Southfront did a story on as part of their daily Ukraine war coverage. The source is really the officer himself, and next the TV interview itself, which made it to YouTube, but seemed to be blocked in the US when I tried to embed it here.

So I clicked off the ‘Russian source’ box in WordPress because I used some of SF’s text.

We need a US/NATO/EU official website with all the ins and outs on reporting on the war that have been cleared by free press experts so we do not have to deal with overzealous claims of aiding and abetting a participant in this nasty war simply by reporting the various views on it.

It is all just a,b,c reporting on published source material with some commentary, which I see all the time on MSM, but of course with their picking and choosing what they want to report and how, with no fears of ‘aiding or abetting’ claims.

BTW, this French veteran seemed to me to be cut from Vietnam Vets Against the War cloth, and as I remember, their critical comments about that war did not expose them to official sanction. Proof of that is their GI bill benefits rolled on just fine until the Agent Orange scandal broke and the government then became their adversary. Gordon was at Michigan State with thousands of them.. Thank you…JD.

This is Day whatever of the Ukraine war and Western media will still not mention a word about how the Maidan Coup birthed this current crisis. The Minsk 1 and Minsk 2 failures seemed to have been swallowed by a Black Memory Hole with France and Germany acting like they know nothing about it when they were guarantors.

And the NeoNazis, some trained by the US and I suspect some other NATO countries, went to the Donbass perimeter and shelled it for eight years killing 14,000 people there, and virtuall all of Western MSM seems to think that had nothing to do with the current conflict which is claimed to be Russian aggression.

So dear readers, if you see any mention of these huge oversights published in MSM please send me to them as may folder for them is still empty. Go to the board and staff link on the font page and my email will be in my bio. Thanks.

[ Editor’s Note: This is quite a catch, a somewhat disabled French officer who went to help out in Ukraine and was not happy with what he saw going on. Think about all the others that have gone over, and certainly seen much of the same horrors, and don’t utter a peep about it when they return.

That is a very poor reflection on Western society that I would describe as a rot. I found this on Mr. Boquet.

Adrien Boquet is a retired military officer, writer and journalist from France, and author of the book “Get Up and Walk Thanks to Science”. Several years ago he suffered a severe spinal injury.

He spent three weeks in Ukraine on a humanitarian mission, and after returning home, he gave an interview to French Sud Radio and spoke, without any cuts, about the numerous war crimes of the AFU, the neo-Nazis from AZOV and the supply of Western arms to Ukraine. He separately mentioned the events in Bucha.

The Ukrainian Presidential Commissioner for Children’s Rights, Darya Herasymchuk, exposed the fakes of Ukrainian propaganda. She said that the information spread about the alleged abuse of small children by “occupants” is a fake.

The interview is in French, but subtitled so you can get the gist. It’s thirteen minutes to watch, and with Southfront’s overview text below… Jim W. Dean ] 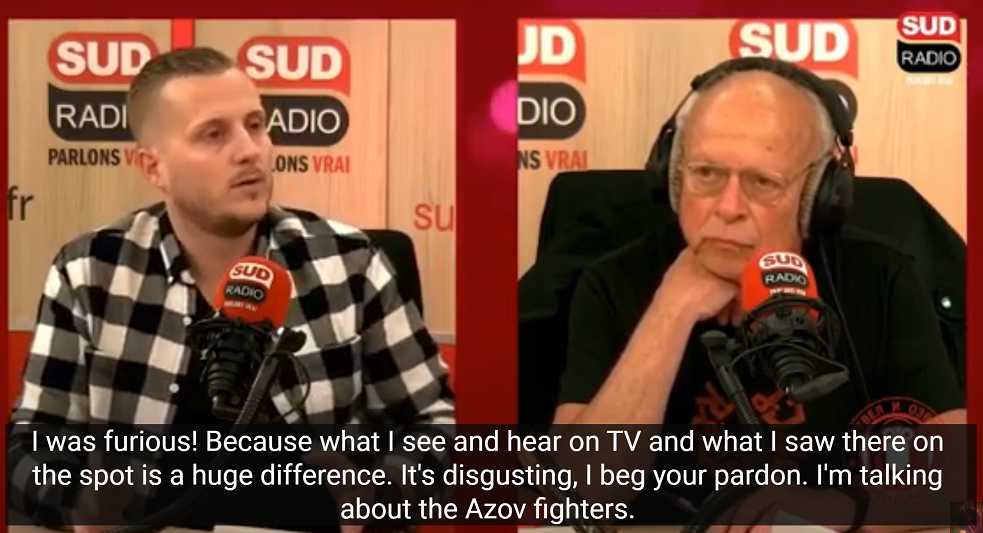 A French volunteer Adrien Boquet told in an interview with French media about the war crimes committed by the Nazi militants of the Azov regimen in Ukraine. He described the real situation in the war-torn country which is hidden by the Western media.

Adrien Boquet is a former French serviceman, author of the book “Get Up and Walk Through Science”. He described his experience of his three-week humanitarian mission in Ukraine in an interview on Sud Radio France.

“Azov fighters are everywhere. With neo-Nazi stripes. It shocks me that Europe supplies weapons to neo-Nazis. The symbols of the SS are embroidered everywhere on their uniforms. They not hide their views. They advertise them. I worked with these people and treated them. They openly say that they are ready to destroy blacks and Jews,” he added.

The French military confirmed the war crimes of Ukrainian militants including against prisoners of war. He confirmed that the AFU militants are using civilians as a “human shield”, hiding ammunition in residential buildings at night, without even informing residents.

“I witnessed how the Ukrainian military shot through the knees of captured Russian soldiers and shot at the head of employees with a rank higher than officer.”

During the interview Boquet confirmed that the Bucha massacre was staged. He added that a lot of reporters from the US are working in Ukraine, filming the staged scenes.

“Butcha was staged. The bodies of the victims were moved from other places and deliberately placed in such a way as to produce a shocking shooting,” he stated.

Adrien Boquet emphasised that he was shocked by the fact that French TV channels invite as experts people who have not been to Ukraine and do not know anything about what is happening there. In conclusion, he assured that he would use his photos and videos taken during the humanitarian mission as evidence of Ukraine’s crimes.