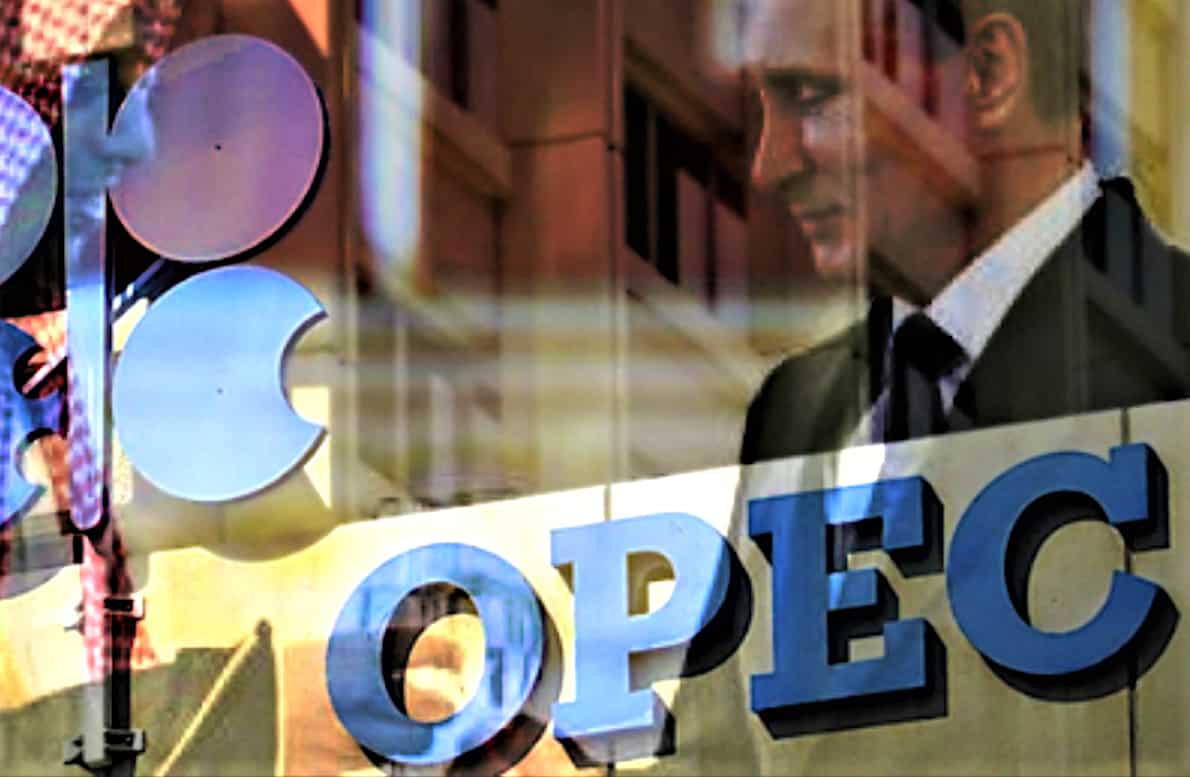 Who of Violent Spring injures by Violent Spring perishes … This could be the key to understanding what is happening in the Middle East where the main OPEC countries do not seem willing to support their NATO allies in the energy war against Russia triggered after the invasion of Ukraine.

This article by the famous geopolitics and intelligence observatory The Soufan Center, founded in 2017 by former FBI special agent Ali Soufan, assumes considerable importance because its position close to the strategies of the Atlantic Alliance is known.

The military business intrigues between NATO and the Persian Gulf countries, built thanks to the Weapons Lobby, do not seem to be sufficient to justify a clear stance by the uneven group of Middle Eastern leaders who obviously between the two litigators, Russia and the USA first of all, they can become the third observer who will take advantage of it.

Nor should we forget that the 2014 coup in Ukraine was favored by the Western embassies thanks to the fundamental contribution of the Hungarian plutarch Goerge Soros and the Zionist community to which he refers. This created important links between Israel and the NATO-protected Kiev regime.

This represents a further element of annoyance for the Arab world which has formally reconnected with Israel after the Abrahamic Agreements wanted by the losing American president Donald Trump but in reality it has always seen this friendship, especially with Saudi Arabia, only functional to the arms trade. .

IntelBrief: Middle East Straddles the Fence on War in Ukraine

U.S. and European leaders have been frustrated by the refusal of many Middle Eastern leaders—particularly those dependent on a U.S. security umbrella—to clearly distance their countries from Russia for its invasion of Ukraine. Yet, the observed regional reaction to the invasion was predictable in light of the intersection between Russian interests and those of many Middle Eastern states. Russia has sought to project power through involvement in several of the region’s conflicts, and it has expanded defense and energy ties with several long-term U.S. allies in the Middle East. Ukraine is not a global power and has little involvement in the region, although it is an exporter of needed foodstuffs and, in years past, was a source of Soviet-era missile technology.

Among U.S. adversaries, Syria’s President Bashar al-Assad owes the survival of his regime to Russian air power. Assad’s characterization of the Russian invasion as a “correction of history and restoration of balance which was lost in the world after the breakup of the Soviet Union” represents a predictable effort to ensure Moscow’s continued support. Iran is a global pariah that has few sources of conventional weaponry or technology other than Russia and, to a lesser extent, China. Tehran shares with Moscow a world view of the United States as a global hegemon and an unbridled power intent on intervening in the internal affairs of sovereign countries in the interests of establishing pro-Western democracies.

The United States’ closest U.S ally in the region, Israel, has also drawn criticism in U.S. media for its hesitancy to denounce Russia’s attack. Israel has many citizens who left the Soviet Union and still have personal and familial attachments in Russia, generating some popular Israeli sympathy for the Russian position. Strategically, Israeli leaders want to continue working with Moscow to ensure that the conflict in Syria, where Moscow maintains forces supporting Assad, does not affect Israel’s security. Israel also seeks Russian support to limit Iranian capabilities; Russia is one of the powers negotiating to restore a 2015 multilateral nuclear deal that ensures that Iran’s civilian nuclear program could not be used to develop a nuclear weapon.

Among Arab states closely aligned with U.S. policy, Egypt has fallen short of condemning the Russian invasion, instead calling for dialogue to resolve the Russia-Ukraine conflict. Egypt has been obtaining a growing percentage of its weaponry from Russia, after facing restrictions on some U.S. arms sales imposed because of Egypt’s human rights abuses. U.S. officials have criticized a key U.S. partner in the Persian Gulf, the United Arab Emirates (UAE), for abstaining on the February 25 UN Security Council resolution denouncing the Russian invasion. The UAE took this position to ensure Russian support in the Security Council for sanctions on the Iran-backed Houthi movement, which the UAE and Saudi Arabia are combatting in Yemen. Both the UAE and Egypt are aligned with Russia in support of eastern Libya-based anti-Islamist strongman Khalifa Haftar, who has sought, both militarily and politically, to consolidate control over the country. Egypt and the UAE want Moscow to keep at least some Wagner Group contract forces in Libya; Russia reportedly has redeployed significant numbers of Wagner Group and regular Russian forces from Libya and Syria to fronts in Ukraine, where Russian units require reinforcement.

Several countries in the region, including Iran, Saudi Arabia, the UAE, Kuwait, Algeria, Iraq, and Libya, are members of the Organization of Petroleum Exporting Countries (OPEC), which is informally aligned with Russia and a few other producers in a broader cartel termed “OPEC Plus.” The United States has put pressure on Saudi Arabia and the UAE—both of which have spare oil production capacity—to increase oil production to alleviate the Ukraine-crisis related spike in world oil prices. However, with relations with Washington strained over several issues and budgets benefitting from the oil price spike, Saudi Arabia and the UAE have joined President Vladimir Putin in opposing a major increase in OPEC Plus oil production. U.S. officials have also questioned the UAE’s allowance of sanctioned Russian oligarchs sheltering their assets in the Emirates to avoid confiscation.

Middle East public opinion on the Russian invasion, to the extent such opinion can be gleaned from regional media, might help explain the refusal of Middle Eastern leaders to break with Russia over the Ukraine invasion. Some commentators contrast Western leaders’ failure to materially support the 2011 “Arab Spring” uprisings against dictatorial regimes with the current U.S. and European military assistance to the defense of Ukraine, a European country, against President Putin’s unprovoked invasion. Other commentators note that the United States justified its 2003 invasion of Iraq, which was conducted without UN Security Council authorization, on much the same grounds that President Putin has cited for invading Ukraine. Still, the region’s refusal to break decisively with Russia over the Ukraine invasion might accelerate the U.S. “pivot” from the region—a result opposite what pro-U.S. Middle Eastern leaders want.