[ Update: Politico has run a feature story on this river crossing incident using the drone screen shots that Southfront used.

The Russian pull out from Kharkiv continues under the justification of using the troops that had been there to ‘protect supply lines’, but did not say where. Were these inside the Russian border which Ukraine has been attacking, or are they to support the Donbass supply lines, where last time I looked they were all inside safe rear areas?

Not mentioned is that once the Kharkiv Russian forces are pushed out, most of them can be redeployed as reinforcements into the Donbass theater.

It is looking like the chances of capturing an army in a cauldron in the East are a myth, as modern technology with drones and super accurate weapons systems have pretty much eliminated surprise ambushes and large lightning armor maneuvers on the flanks.

I see an attrition war developing, where NATO is going to match its 15 to 1 superiority to Russia’s. NATO troops have been in Ukraine for years, not counting the NATO intel people, and more will be going there to bolster the Ukrainian forces.

The term ‘fighting to the last Ukrainian’ is not a figure of speech. It is NATO policy to using proxy stooges to fill the coffins. Westerners volunteer to be financially bled to death as long, as they don’t have to see flag-draped coffins, the kind that undermined the Vietnam War… Jim W. Dean ]

[ Editor’s Note: This will be a classic combat story from this war, Ukraine’s rivers, which can determine who wins and who loses in mechanized warfare. It appears the Russians, to avoid civilian casualties, are picking more isolated spots for crossing, which makes them stand out more for drone surveillance.

When you add in the time to put pontoons across, especially the three that seem to have been put here, bunched up and offering not only a huge bridge target, but the gathering of armor staging to cross, you become a dreamed of target by your opposition.

The Ukies seem to have had time to bring in long range artillery staged in various positions, not massed so as to offer a rich target themselves, and harder for the Donbass Republic forces to locate and then eliminate.

I continue to be surprised how armored groups continue to bunch up like this, a dream come true for the opposing side. With these pontoon bridges being so easy to take out, that greatly increases the risk that a large force that got across could then not be resupplied or get needed reinforcements, with bridges destroyed behind them.

Here is Defense Intel’s video analysis out of Singapore per commenter below. My comment would be his mentioned of this event not affecting the Russian offensive conflicts with weeks and weeks of reporting of the expected ‘cauldron’ battle where the Ukrain army in North east Donbass would be destroyed to the point of combat ineffectiveness.

But what we have seen is a quite slow process which generally we have viewed as to the Russian approach of wanting to keep combat loses as low as possible, in men and material.

So Defense Intel mention of this event is not is a stretch. The Russian gains are coming slowly, and there might be others reason for that. We have this week seen Russians retreating out of Karkiv from a Kiev offensive to the border for the media coverage that would bring.

Or maybe it is a feigned retreat to stretch these forces out and then counter attack and capture or wipe them out. There is typically not a one big day event where something like this would happen.

That said, the slow the campaign in the East goes the more time for NATO to arm Kiev, as are more of the EU countries. So we also have a weapons supply war going on. NATO has cleared out its old stuff and will have to started drawing down on it NATO defense stockpiles.

We see Russia having invested a lot of effort to blow that stuff up to avoid depleting it during battles where it absorbs losses. As the famous military saying goes: “The issue is still in doubt.”

This is the kind of thing that happens when armies have not been in active large scale combat situations for a long time. This is why military commanders in the West love to jump into ‘small wars’ with little chance of reputations being harmed, so the troops and officers can get some live fire training. It makes all the difference when a bigger war comes.

The photos below are about as big a disaster as I can imagine. If it is a counter battery inability or failure, in that the ones they had were being used somewhere else, what was learned here is that such crossings should never be attempted without recon assurances that enemy artillery cannot quickly bring them under bombardment.

This incident will be used in Russian officer school training for many years… Jim W. Dean ] 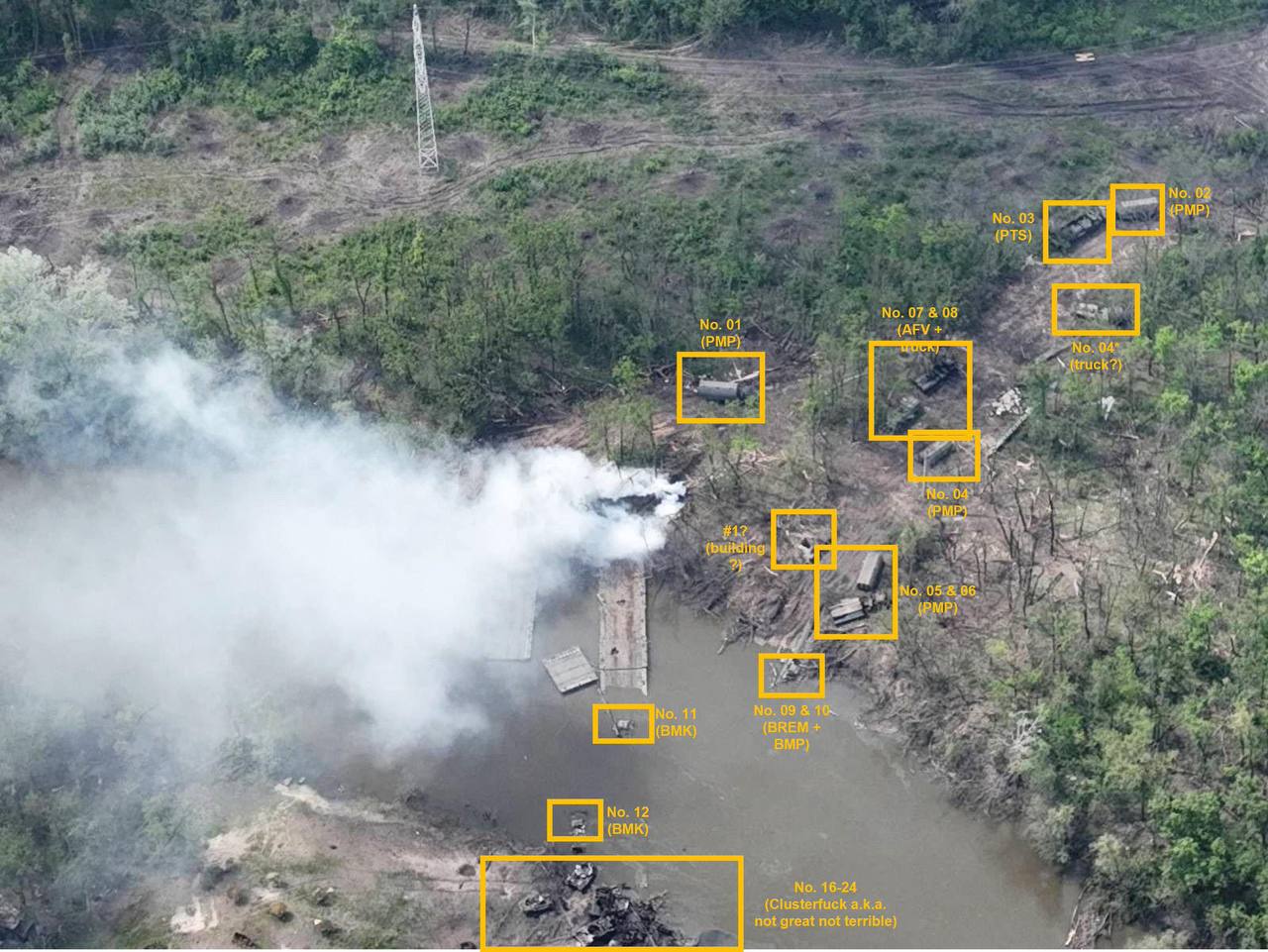 The Russian-led forces are aimed at surrounding the Ukrainian grouping deployed in the Severodonetsk-Lisichansk region in the Luhansk People’s Republic. Despite the recent successes on several front-lines in the region, the Russian and LPR military are stuck in the town of Bilohorivka located to the west of Severodonetsk.

The Russian-led forces attempted to establish at least three pontoon crossings from 7 to 11 May, which were destroyed by the Armed Forces of Ukraine (AFU). 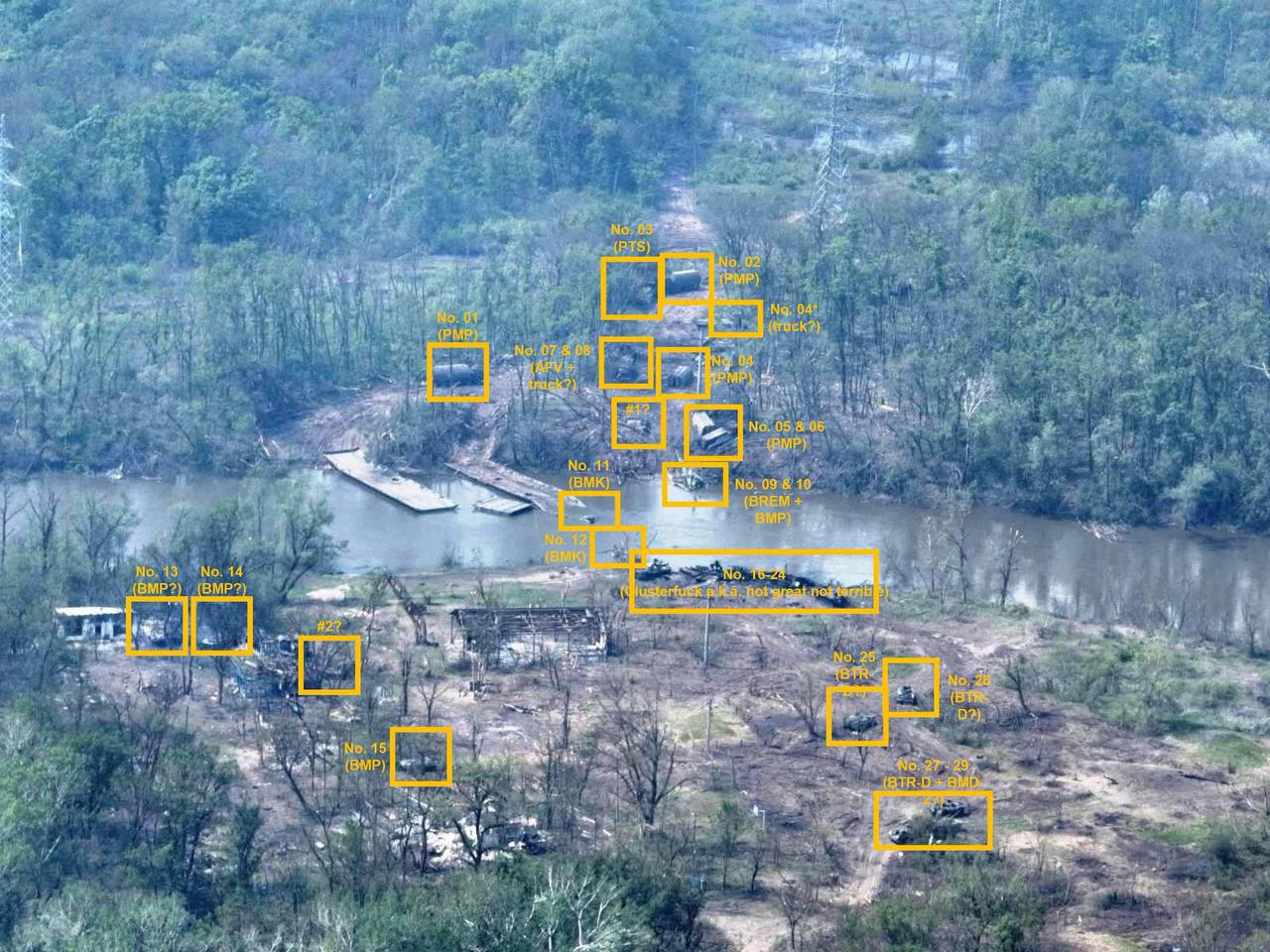 As a result of the shelling, the Russian-led units suffered heavy losses. According to the drone footage from the spot, 73 units of Russian equipment were destroyed, including: 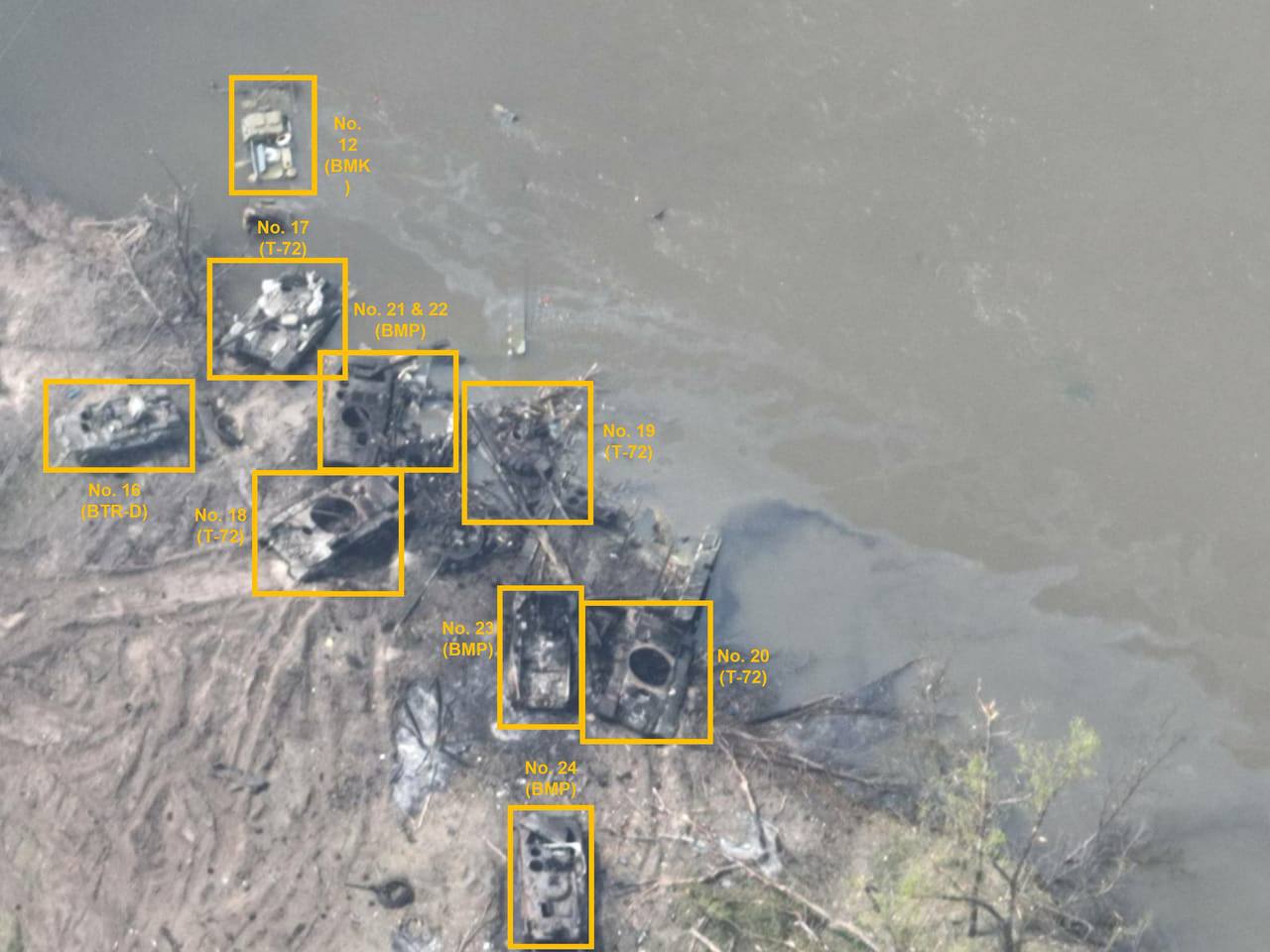 Meanwhile, LPR forces with support of Russian units including the Special Force reportedly launched an assault on the city of Severodonetsk. The Allied forces are advancing from three directions from the north. Clashes broke out on the outskirts. 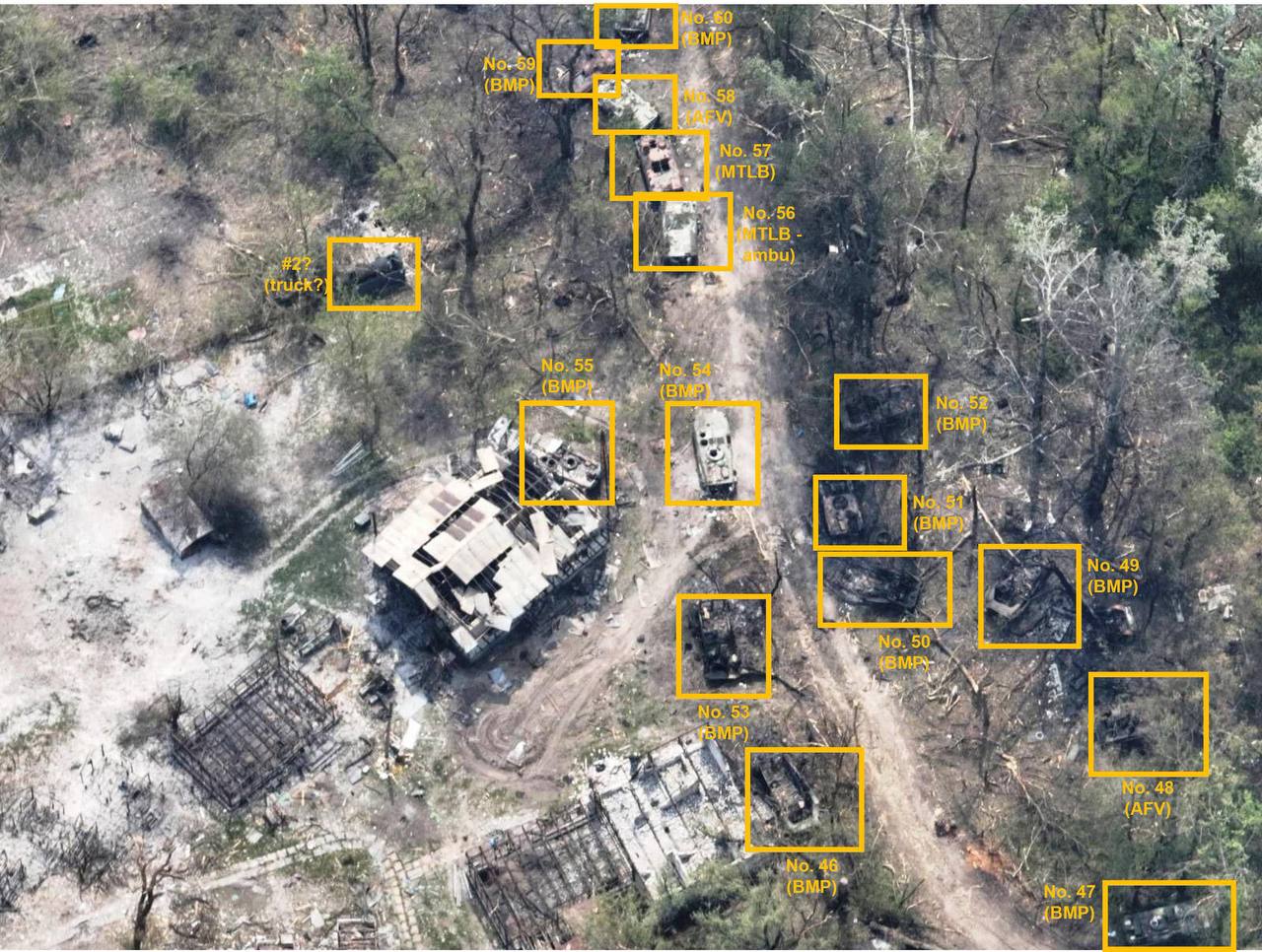 During the retreat of the AFU, the bridge between Rubezhny and Severodonetsk was blown up. At the same time, the roads leading to Lisichansk are almost under the Russian fire control. Fierce battles are going on in Belogorovka and Shepilovo.

LPR forces are storming Privolye. The offensive from Popasnaya continues in the direction of Kamyshevakha. There are battles for control over the villages of Orekhovo and Toshkovo.