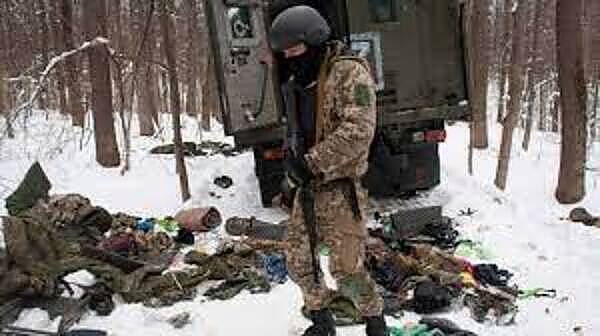 The war goes on, although it hasn’t quite yet reached the intensity of the libel battle between Rebekah Vardy and Coleen Rooney in the High Court in London. I still think that ‘Russo-Ukrainian War’ is the best title. At any rate the MSM haven’t come up with anything better. It’s turned into a war of attrition with moderate to heavy casualties on both sides. Assessing just how heavy the casualties have been is very far from straightforward, although it still seems safe to divide the Ukrainian figure for Russian casualties by ten. I think that the Ukrainians will do less well in the war than in the Eurovision Song Contest.

Russia is right to complain that they are effectively fighting the whole of NATO. Aside from the British and American ground troops (special forces) deployed, crazily, inside Ukraine, NATO countries are supplying Ukraine with enormous quantities of weapons. Indeed US stocks of precision guided munitions are reported to be running low.

I expect a formal Russian declaration of war on the Ukraine in the next few months, possibly weeks, followed by general mobilisation. As Ukrainian stocks of precision anti-tank and anti-aircraft missiles run low Russia is likely to regain control of the battlefield and Ukrainian airspace.

The Azov battalion continues to hold out in the Azovstal steelworks, desperate to protect its dirty secrets. Conditions are now reported to be worse than on the Beltway at rush hour, with bodies piled up everywhere. They can’t hold out for much longer. I hold no more brief for the Azov battalion than I do for the Waffen-SS but they are brave men and should be treated as such when they finally surrender. There’s been nothing like it since World War II.

NATO strategy is to get as many Ukrainians killed as possible by prolonging the war for as long as possible. So far as I can tell NATO is not trying to start World War III, but they might want to think twice about accepting Finland and Sweden into membership. If the Russian Government goes public on the intelligence yield then support for Ukraine in the West will fall away.

At the moment we are close to what NASA might term ‘Max Q’. The venom and lies being directed at Russia have understandably angered her elected president and government. Western precision weapons have dramatically increased Russian casualties. Anglo-Russian relations haven’t been this bad since the Crimean War.

Russian troops are now being accused of carrying out mass rapes, in what is undoubtedly intended to be an echo of 1945. There is no doubt that Russian soldiers raped a great many German women, sadly, at the end of the last world war, but the rapes were sanctioned by the notorious German agent Josef Stalin, who was not of course Russian.

Stalin’s intent seems to have been to damage the reputation of the Red Army. I doubt that he was anxious to let the boys get their leg over, as it were, or desirous of getting back at the Germans for the mass rape of Russian women. Rape is wrong of course and never justified, either in peace or war.

However I sense increased scepticism about Ukrainian claims of Russian war crimes, which are starting to assume the proportions of a blood libel. Thankfully the Russophobes Boris Johnson and Simon Case aren’t likely to remain in power in London for much longer. Their resignations should pave the way for a UK climbdown on false claims about GRU officers poisoning the Skripals in 2018 in Salisbury and Lt-Colonel Litvinenko in 2006, and of Russian involvement in the murderous shoot-down of MH17 in 2014.

Revelation of the German GO2’s role in poisoning and probably murdering the Skripals would considerably ease tensions between London and Moscow. (Litvinenko poisoned himself of course, being killed by the antidote which he swallowed at the same time as the polonium.) It’s unlikely that the fanatically anti-Russian Liz Truss will continue to serve as Foreign Secretary, thankfully.

Will the Ukraine survive?

It’s now clear that when President Zelensky rejected President Putin’s fair peace terms back in March he bet the farm. There is now reporting that Poland is planning to participate in the dismemberment of the Ukraine, which would reflect the historical position, Western Ukraine being incorporated in the Polish/Lithuanian Commonwealth. The Poles of course participated in the break-up of Czechoslovakia after Munich.

I imagine that Russia will want to incorporate the whole of the Ukraine east of the Dneiper into Russia, along with a land bridge to Transnistria. Ethnic Ukrainian hatred for Russia and Russians is such that a negotiated solution is unlikely to work. Moscow will want a deep buffer zone around the Donbas.

Incorporating Western Ukraine into Poland is likely to prove more stable in the long run than having a rump Ukrainian republic endlessly plotting revenge against Russia. I fail to see how Russia could ever trust the Ukraine again.

The Palestinians have got their panties in a twist, no offense intended, over the unfortunate shooting on Wednesday of Al Jazeerah journalist Shireen Abu Akleh. Sadly for the Palestinians it looks as though she was shot by their own side. There was wild firing at the time. Most terrorists have only basic weapons training.

The Israelis were quite right to ask for a forensic examination of the bullet or bullets which killed her. Unsurprisingly the Palestinian Authority are holding out, preferring to indulge in anti-semitic rants.

A bit like the shameful mass shooting in Buffalo, NY, you have to ask cui bono. Who gains? Not the Israelis, that’s for sure. They would have known that had they shot up an Al Jazeerah journalist every bunch of left-wing nutters in the world, from The Guardian to the UN to the State Department, would have been jumping all over them.

I’m afraid that the answer, if you’re a journalist covering the West Bank and Palestinian terrorists have opened fire on the Israelis, is to duck. Bullet-proof vests aren’t much use, sadly, if you’re hit in the head. An Israeli sniper, by the way, would hardly have gone for a head shot, when armor-piercing rounds are available for most sniper rifles.

David Frost, who by all accounts is a nice chap, and who is certainly very able, is being talked about as the next Tory leader. However there’s a problem – he’s a peer and Tory party rules insist, irrationally, that the Party leader be drawn from the ranks of MPs. Since this rules out the most intelligent members of the Party all y’all may agree that it’s not a particularly sensible rule.

In a letter to the Telegraph this week that nice man Lord Lexden, official historian of the Conservative and Unionist Party, fell into rare error in suggesting that the last Prime Minister to come from the Lords was the 3rd Marquess of Salisbury, in 1903. It was in fact my old friend the Earl of Home, in 1963, one of the few people I’ve known who met our community partner Adolf Hitler (at the Munich Conference in 1938).

Confusion has arisen because Sir Alec Douglas-Home, as he became, renounced his peerage shortly after becoming PM. Many commentators wrongly assumed that he was obliged to enter the Commons. Not a bit of it. It was a political decision, and, as it turned out, a mistaken one.

There is no reason at all why the Tory Party could not change its rules and have a leader in the Lords, as long as he or she commanded a majority in the Commons. Frosty would make a fine leader.

That nice man Dr Darrell Hamamoto, from Sacramento CA, was kind enough to interview me on YouTube this week:

A Conversation with The Hon. Michael Shrimpton, Pt. I

A Conversation with The Hon. Michael Shrimpton, Pt. II

And yes, I was intending to refer to the 2020 election, not the 2000 election, which was properly conducted, apart from the odd hanging chad.

Big-hitting Aussie all-rounder Andrew Symonds sadly died on Saturday evening, when he rolled his vehicle, possibly an SUV, in the Hervey Range, west of Townsville, north Queensland. No other vehicle was involved, but the police have ruled out drink as a factor.

I used to live in Townsville, as a teenager. Those roads can be tough to drive, not least at night. I have a suspicion that a kangaroo or wallaby may have run across the road in front of Andrew’s vehicle. They’re quick and you don’t get much warning, especially at night.

It’s a tragedy. He was only 46. He was a fine cricketer, in his day the most exciting talent in the world. Few batsmen have ever hit a cricket ball harder. Born in England to West Indian parents he was given up for adoption to a nice English couple, who emigrated to Oz. He could have played for England, West Indies or Australia, but chose the latter. His was a rare talent and he will be missed. My sympathies to his wife and young kids, to Queensland cricket and Cricket Australia. Well batted, Simmo.

Another sad loss since my last column has been tough guy actor with a heart of gold Dennis Waterman, younger brother of the famous boxer Peter Waterman. Although younger viewers would know him best from New Tricks, the BBC cold case police drama, he started acting as a child. In 1962 he appeared on the CBS comedy Fair Exchange.

He sprang to national prominence in the 1970s as John Thaw’s partner in The Sweeney. (I once met John Thaw, a nice man.) He is most associated however with his long-running role as Terry, eponymous minder to George Cole’s Arthur Daley in Minder. It was a brilliant series, its catchphrases entering the language.

In later years Dennis sadly battled with lung cancer, eventually succumbing. His last appearance was alongside James Cromwell in the Australian comedy Never Too Late, which is now on my must-watch list.

He was done a couple of times for drink-driving, which only goes to show that our drink drive limit is too low. He had some interesting views on domestic violence but never crapped on anyone’s bed. He was a wonderful bloke and an underrated actor.

You can still support my work via PayPal, at the following link:

It’s been suggested that I’d get more donations if I looked a bit more miserable! The problem with that is I’m not miserable, despite being ordered to pay £30,000 legal costs to the Solicitors Regulation Authority. Being in love helps, but I’ve also started playing cricket again!