by Dale A. Jenkins

However, Admiral Chester Nimitz had built a brilliant cryptography team at Pearl Harbor, and they informed him of the coming carrier attack.  Nimitz planned a surprise ambush of the Japanese carriers.

Nimitz had three carriers, Enterprise, Hornet and Yorktown, each with a squadron of fighters and torpedo planes and two squadrons of dive bombers – a total of over 230 planes.  Nimitz quickly assembled a mixed bag of over seventy Navy, Army and Marine Corps planes on Midway Island.

The Nimitz ambush called for planes from both Midway and the carriers to arrive simultaneously over the Japanese carrier fleet in a concentration of force and deliver a devastating attack.

LtCdr Edwin T. Layton, Pacific Fleet intelligence officer, predicted on May 27 that the Japanese fleet would approach from the northwest, steam toward Midway on a southeast course of 135 degrees, and launch an air attack on Midway Island at 0430 on June 4.[i]  The Nimitz plan called for PBY scouts to fly from Midway at 0430, contact the Japanese carriers about 0600, and report their position, course and speed.

To establish the position of the carriers, Layton would have drawn a line from the interception point to the northeast, perpendicular to the Japanese course, and would have marked a point on the perpendicular line 140 miles from the interception point.  The carriers were to be at that position at 0600.  Upon receipt of the PBY contact report, they would fly 140 miles to the interception point, well within their 175-mile maximum operating range, and meet the Midway planes over the Japanese carriers at 0720.  The starting position for the carrier launch also measured 200 miles straight north of Midway Island and would be used as the navigation reference point by the carrier command.[ii]

The carriers departed Pearl Harbor and were northeast of Midway by June 2.  Rear Admiral Frank Jack Fletcher was in overall tactical command.  At 0430 on June 4, the PBY search planes from Midway flew on their assigned vectors.  At 0603 a PBY reported contact.  On receipt of the PBY report, every flyable plane on Midway took to the skies.

However, at 0600 the Pacific Fleet carriers were over sixty miles to the east and north of the position 200 miles north of Midway.  They also were about 200 miles from the interception point with the Japanese carriers, and the planes were out of range.  The distance would have to be shortened by at least 25 miles to get to maximum operating range.  At the carrier speed of 25 knots, that would take an hour.  The launch time was reset for 0700. 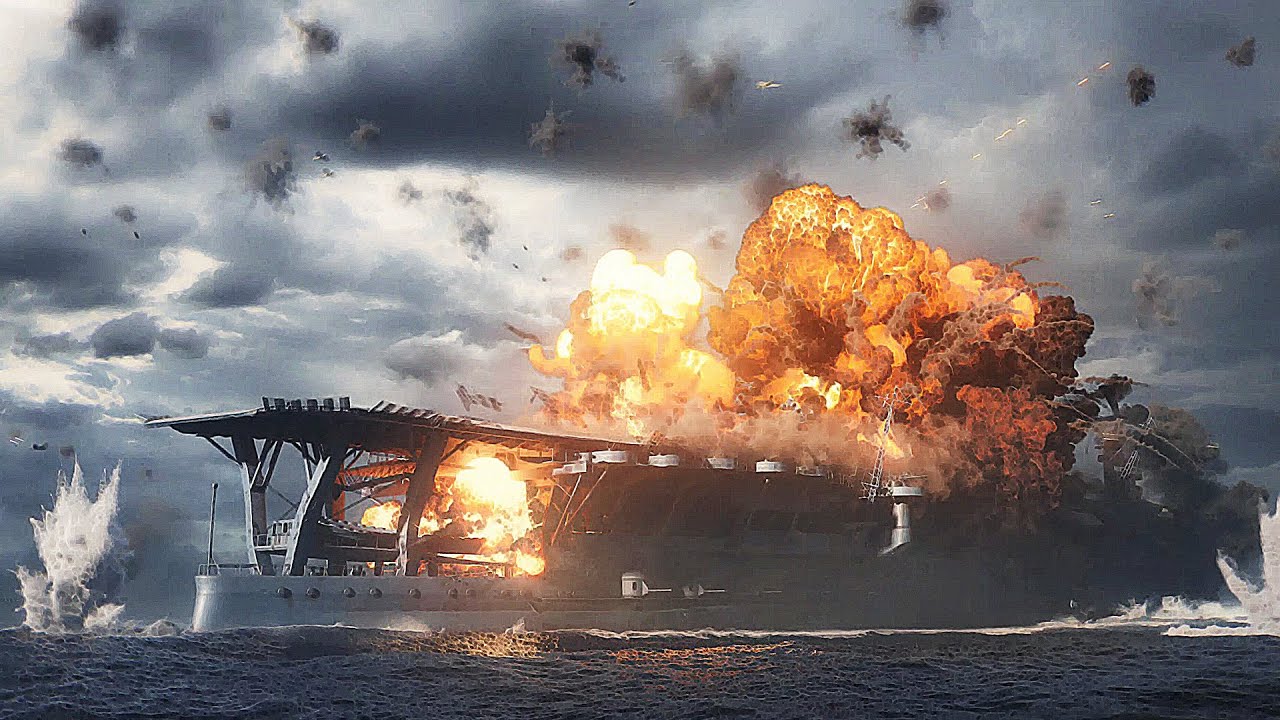 The plan for achieving a concentration of force of carrier planes and Midway planes over the Japanese carrier fleet had failed.  The Midway planes arrived alone over the Japanese carriers at 0710 without fighter protection, and Zero fighters shot down most of them.  No hits were scored.  The carrier planes, 175 miles away, began launching at 0700.

Starting about 0920, Hornet and Enterprise torpedo squadrons found the Japanese carriers and began gallant but hopeless attacks.  Another hour after that, at 1020, a massive Japanese counterattack was nearly ready to attack the Pacific Fleet carriers that could have resulted in a Japanese victory.  However, at 1025, Dauntless dive bombers from Enterprise and Yorktown arrived and destroyed three of the four carriers.  The fourth carrier was destroyed later in the day, but not before its attack on Yorktown led to the loss of that carrier.  With four enemy carriers sunk, Midway would go down as the greatest naval victory of the Pacific War.

The Nimitz concentration of force attack plan was the best chance to achieve an early victory at Midway with a high probability of success at the least cost, but the plan failed when the carriers were out of position at the appointed time.

Author:  Dale A. Jenkins has had a lifelong interest in the Navy and international affairs. He is a former US Navy officer who served on a destroyer in the Pacific, and for a time was home-ported in Yokosuka, Japan. Pacific Fleet commitments took him to the Philippines, Taiwan, South Korea, Hong Kong, and Singapore. While on active duty he was awarded the Navy/Marine Corps Expeditionary Medal.

His business career was primarily in international banking, and he also was a staff director at the Council of Foreign Relations in New York. Dale currently serves on the Samuel Eliot Morison Committee of the Naval Order of the United States, New York, and as a Regional Director of the Naval War College Foundation. As a result of his active-duty experience and new revelations, Dale provides insights into the diplomacy and strategies of the Pacific region. He has degrees in history and business from Harvard and Columbia.

SOURCEDale A Jenkins
ATTENTION READERS
Due to the nature of independent content, VT cannot guarantee content validity.
We ask you to Read Our Content Policy so a clear comprehension of VT's independent non-censored media is understood and given its proper place in the world of news, opinion and media.