[ Editor’s Note: Mr. Erdogan is doing what he always does with NATO, holding it hostage to collect the best ransom that he can for Turkey and his own personal political objectives to get him onboard with his vote to bring Finland and Sweden into NATO.

But this whole venture is a fool’s paradise, as the 15 to 1 military superiority that NATO had before this current Ukraine-Russia war will grow even higher, when the odds of Russia attacking a NATO country are about as close to zero as imaginable.

The flip side of that is NATO, which has always been an offensive organization in sheep’s clothing as a defensive one, just puts Russia into a position where it has fewer options to defend itself without going nuclear.

And it has a huge arsenal to send presents to all the NATO countries that thought they could asset strip Russia. So silly me, I would suggest that NATO can be a risk to everyone’s security, and they have a track record to prove it.

Just look at the devastation inflicted on ‘other countries’ in all the NATO engagements where no real security threats existed. Look at the money generated by the warmongers that flowed into all the political campaigns that voted the ‘correct’ way on funding.

NATO has left a modern trail of tears, in the form of a crushing national debt on future generations. It’s a great irony that what no enemy was able to inflict upon us, our own political class, banksters and war grifters have. Thus ends my cheery missive for today… Jim W. Dean ] 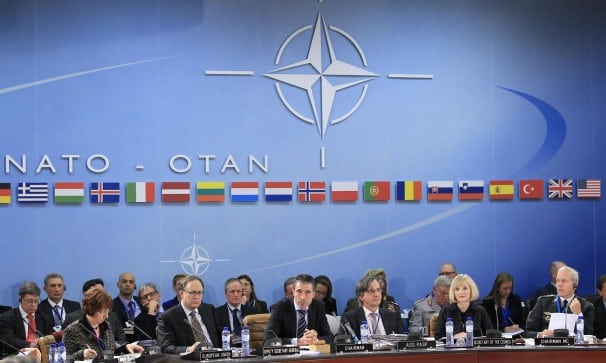 With its opposition to NATO bids, Ankara could be vying to also get the US to unblock a major fighter jet purchase, while scoring political points at home.

Despite tough talk from President Recep Tayyip Erdoğan, Turkey is likely to ultimately greenlight NATO membership for Finland and Sweden. The military alliance will just have to pay a price first.

Ankara has raised objections to the two Nordic countries’ bids to join NATO, blocking the organization from proceeding with the accession process. Turkish officials have accused both Finland and Sweden of supporting Kurdish “terrorists” — an issue related to a militant group in Turkey — while also expressing concerns about arms export restrictions.

“NATO is a security alliance, and Turkey will not agree on jeopardizing this security,” the Turkish leader said earlier this week.

…“The price is unknown at the moment, but that there will be a price is clear,” said Jaap de Hoop Scheffer, a former head of NATO.

…“That price might well be that the Americans lift their block on F-16s,” De Hoop Scheffer said.

…“We can’t solve this problem” by simply smoothing out the Washington-Ankara relationship, said Sinan Ülgen, a former Turkish diplomat.