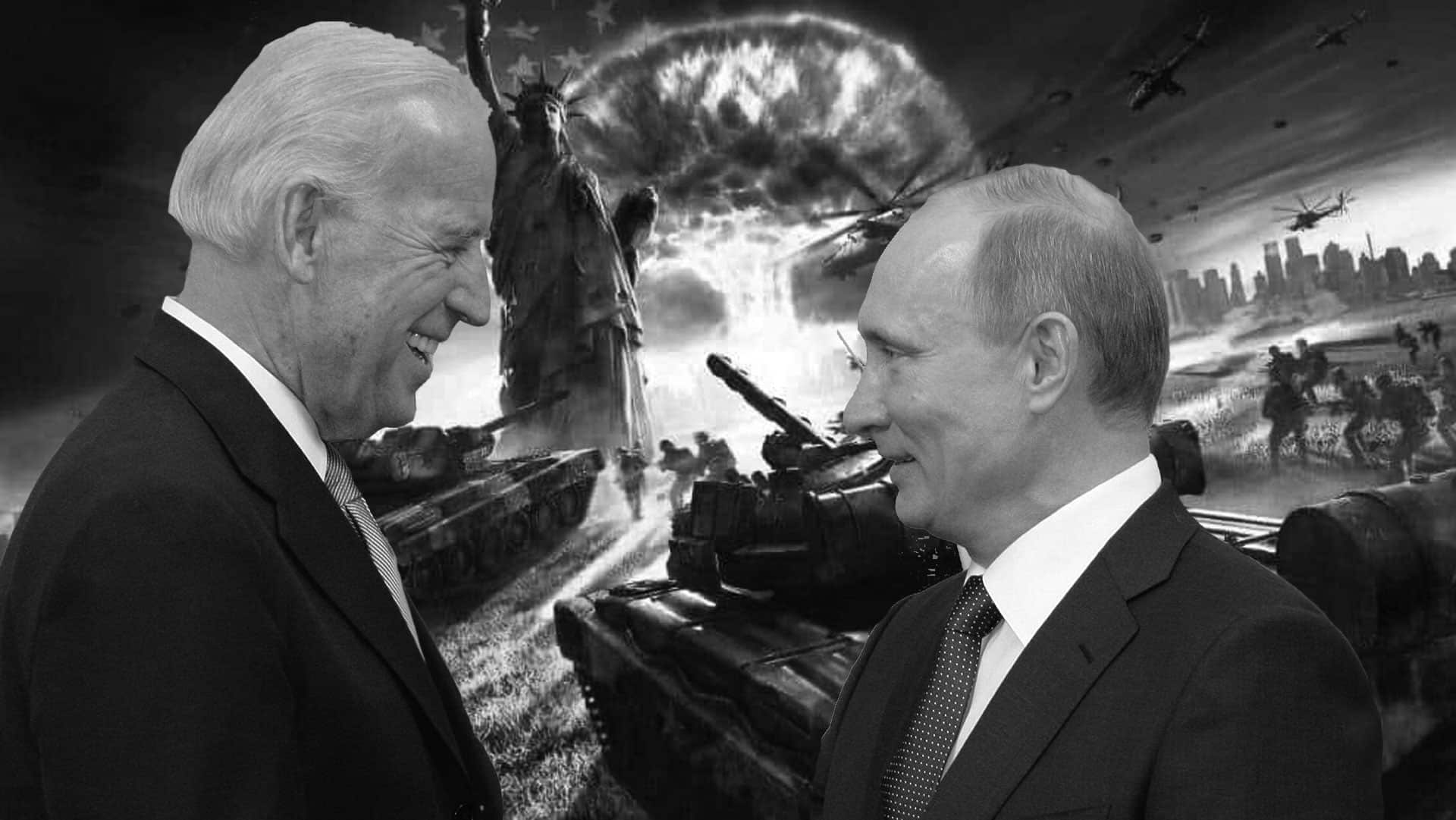 If the U.S. (and its allies) wanted to protect Ukraine, then it (they) would not be doing all it can to prolong Russia’s invasion and destruction of Ukraine. They would not be flooding Ukraine with their weapons to kill Russians. They would not be demanding that Ukraine fight on, which destroys Ukraine even more. But this is what they are doing.

The U.S. (and its allies) are doing everything they can to defeat Russia. They are also doing everything they can to increase the sales, profits, and stock-market valuations, of Lockheed Martin and the other corporations whose only or main customers are the U.S. Government and its allied governments which buy their weapons — buy them increasingly now in order for those weapons to be used even more now by their vassal-nations such as Ukraine, and Israel, and Saudi Arabia, against the nations that they also are wanting to defeat, such as Palestine and Yemen, and other countries that the U.S. and its allied governments care nothing about except that they want them to be defeated — to be punished for NOT caving to the U.S. Government and its allied governments, and which nations they condemn while calling themselves ‘the free world’.

How evil is this? Let’s see:

On May 19th, U.S. President Joe Biden signed into law an additional $40.1 billion to Ukraine in order to continue its war against Russia, which Biden and his boss Barack Obama, and Obama’s organizer of the 2014 U.S. coup in Ukraine Victoria Nuland had begun by means of that coup, which had transformed Ukraine from being a peaceful neutralist country on Russia’s border, into becoming promptly a rabidly anti-Russian and pro-U.S. country on Russia’s border that’s in a civil war and that is a prospective future basing-area for U.S. nuclear missiles there (like a 1962 Cuban-Missile-Crisis in reverse) to hit Moscow only a 7-minute flight-time away. It would be a checkmate in the U.S. regime’s long war to add Russia to its conquered prizes if the plan would succeed.

To place that $40.1B additional expenditure into perspective, the comedian Jimmy Dore headlined on May 19th “ALL DEMOCRATS Vote [in Senate] To Send $40 Billion To Ukraine”, and Dore said “That’s more than three times what the entire U.S. music industry makes in a year,” and he called it “a wealth-transfer to the military-industrial complex.” He said that if this $40.1B addition to the current year’s expenditure on Ukraine’s war were instead to be spent domestically, “that would stop homelessness.”

I checked those allegations. Here’s what I found:

The entire U.S. music-recording industry does $11B in retail sales per year.  (That’s sales; profits would be some percentage of sales, but even if it were ALL of the sales, then this $40.1B would be “more than three times” it.)

The annual cost to eliminate homeless in U.S.=$30B.

He wasn’t exaggerating; he was understating. This is how evil the U.S. Government actually is.

Mr. Dore also noted that all Democratic Party U.S. Senators and members of the U.S. House of Representatives voted for this additional $40.1B expenditure and that the overwhelming majority of the Republican ones also did. Are Republicans now even more neoconservative than Democrats are? Not really: it is always the case that a neoconservative bill in the U.S.

Congress gets virtually 100% support from the Party in power and gets an overwhelming majority of the votes of the Party that doesn’t happen to be in power at the time. All the while, America’s ‘defense’-contractors increase their sales and profits and stock-market valuations. So, Dore expressed anger that in the Senate, even Bernie Sanders voted for this. And Glenn Greenwald presented a scathing condemnation of the hypocritical ‘progressive’ Democrat Octavio Ocasio-Cortez’s “complete reversal of everything that she pretended to believe in for years”. He attributed this contradiction of herself to “In 2016, when Hillary Clinton lost to Donald Trump, … instead of accepting responsibility because they themselves had nominated one of the most destructive and outright hated political candidates in modern American history in Hillary Clinton, … they decided to blame everybody else, … especially Putin and Russia. … And so Democrats have been feeding on this anti-Russia antipathy and hatred” ever since. And, so, “there is no viable anti-war [political] left in the United States.”

Though I enormously respect Glenn Greenwald, and everything that he said is true, I think that his analyses suffer from shallowness due to his apparent ignorance of history — his excessive focus on the obvious and recent news, outside of the broader context that’s required in order for there to be a deeper analysis, a scientific understanding, which identifies actual historical causes behind current events. This is not to deny that what Greenwald says is true, but to assert that it lacks the wisdom that ONLY an authentic historical analysis can bring to current events and to public-policy issues. Only by understanding causes can one move forward into the future (if there will be a future) so as to control future events in a constructive way, that will benefit future generations, instead of for future events to continue to degenerate even further into a hell which comes closer with every passing day.

I documented at Greanville Post, on May 19th, “The Secret U.S.-&-UK War Against Europe”, showing that BOTH American political Parties are controlled, at the very top, by a cabal of very closely connected individuals who are basically servants of the billionaire controlling owners of firms (such as Lockheed Martin, Raytheon, and General Dynamics), which corporations’ major or even ONLY customers are the U.S. Government and its allied governments, but especially these controlling individuals are an organization that was started in 1877 by the British aristocrat Cecil Rhodes, and which finally took control over the U.S. Government itself on 25 July 1945, just three months after U.S. President FDR died and became replaced by the naive and manipulable Harry S. Truman, who set America’s Government irrevocably onto its control by “the military-industrial complex” and in league with Britain’s aristocracy, to ultimately control the entire world and obviate altogether the United Nations that FDR had started planning and hoping for back in 1941. (The Republican Dwight Eisenhower was also a key part of the Rhodesists’ American operation.)

And if this assertion doesn’t seem credible, then check the links in this report, which explains (and those links document) the actual source for the 19 May 2022 law to pour an additional $40.1B into Ukraine, which after the 2014 coup is a U.S. vassal-nation that’s self-destructing in order to serve as today’s main battleground (and U.S.-proxy) in the American (and British) aristocracy’s long war to conquer not only Russia, but also Europe, and the entire world.

First, the entire world (especially in Europe) has to recognize and publicly acknowledge the unacceptability of America’s Government, so as to condemn it and order all of its troops out, ASAP. It is a hostile power, to the public, everywhere — even in places where its stooges and hangers-on-billionaires are in political control (like cancer) (such as in Europe). America’s Government is NO DEMOCRACY.

No empire can be, and America’s most assuredly IS NOT a democracy. (Nor is UK’s.) It is a hostile occupying alien force, even inside the United States. (And this is widely suspected to be true, even by the American people.)

In fact: the U.S. is the world’s #1 police state. It is cancer, everywhere that it occupies, and needs to be rooted out everywhere. Franklin Delano Roosevelt, Abraham Lincoln, and the majority of America’s Founders would have viewed this nation, today’s U.S. Government, to be their enemy, because it violates everything that they believed in, and hoped for, about America’s future, and the world’s. Everything.

SOURCEBusiness Insider
ATTENTION READERS
Due to the nature of independent content, VT cannot guarantee content validity.
We ask you to Read Our Content Policy so a clear comprehension of VT's independent non-censored media is understood and given its proper place in the world of news, opinion and media.