Mercenaries walk into a Russian ambush with tanks, helicopters and artillery

[ Editor’s Note: So now Ben Grant lives the rest of his life with a blown off leg, in a dumb war which his mother probably supported, and had no problem with the 14,000 people killed in Donbass while the West pretended it was working on two western Republics were seeking political autonomy.

This is another case of past war veterans thinking they will keep their skill sets sharp by jumping in to foreign wars as mercenaries, and maybe someday having that help launch a political career.

George Bush got shot down, but was able to get his plane down into a water landing but had no memory of what happened to his tail gunner. One would have thought George might have at least checked on his being alive.

But he was focused on getting out ASAP and not going down with the plane. BTW unbuckling the pilots straps was designed to be done quickly. But the tail gunner was an enlisted man and might have been deay anyway so what the heck.

But he also might have been wounded. Either way Georgie kept his story short, with less chance of getting tripped up. Bush One later also got his son into one of the dreamed for National Guard slots, back when during the Vietnam War politicians kids were miraculously getting a big share of those limited slots.

So I wish Dean Arthur the best in healing up so he can make the best of his life. Maybe while he is recuperating he can corresspond with a lot of the parents who had sons not only killed by NATO trained Nazis, but now have NATO mercenaries jumping into the fun to burnish up their mercenary resumes.Arthur’s parents are lucky he was not captured and executed by the Donbass Repbublic as it says it plans to do with all foreign mercenaries.

Modern war with the sophisticated weapons used is a killing machine. Many mercs met their doom by having a hypersonic missile visit them their first night in Ukraine before orientation in the morning, leaving a big hole ripped in their parents hearts.

But sadly it seems the international mercenary game is here to stay. Various militaries and Intel agencies routinely use them now, everything from high end expensive special operations people, and at the other end of the spectrum third world victims sucked in by adds to make a lot of money as security guards, who find themselves throw into combat with minimal training.

The UN has sadly been invisible in all of this, and ignored by all the major powers, with the UN employees seeming to want to keep their heads down and nice paychecks, benefits and retirements flowing smoothly… Jim W. Dean ]

Another video from foreign mercenaries fighting in Ukraine was shared online. The video shows the efforts of the Ukrainian and foreign fighters to resist Russian forces and artillery.

Chaos in the retreating groups is seen on the video, as well as losses and injuries among the personnel. The exact location of their deployment was not revealed, however, some of them were identified.

According to The Telegraph, the fighting took place in woodland north of Kharkiv.

The son of Helen Grant, a member of the British Parliament from the Tory Party, Ben Grant, a 30-year-old former Royal Marine, was seen on the video. He arrived in Ukraine in March.

Ben Grant attempted to help his injured comrade, former Grenadier Guardsman Dean Arthur who was injured by a landmine during an intense firefight. The two Britons were with a team of around 15 foreign volunteers who have been supporting Ukrainian forces, The Telegraph reported.

Ben Grant also shared another video showing the destruction of a Russian transporter vehicle with a NLAW anti-tank missile.

The main characters of the videos were interviewed by The Telegraph in an attempt to glorify their courage shown in the struggle on foreign territory for a foreign state. 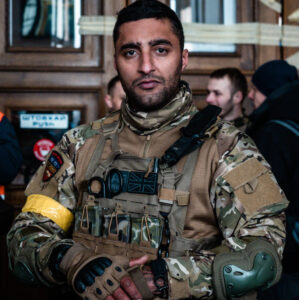 Mr Grant, a veteran of Afghanistan, said the fighting was worse than any he had previously experienced.

“He told The Telegraph that his 15-strong unit, made up of British and American volunteers and two Ukrainian translators, had been preparing for an assault on a Russian-held target near Kharkiv when they were ambushed.

He said: “I think we must have been spotted by drones beforehand and they had set up their lines… so as we went in the mass firefight broke out where you see [in the video] what we saw.

“We were walking in single file as the contact happened, Deano was at the end of my team, when he went to take a knee… we were shooting, getting our heads down and shooting them. I was terrified but driven to complete my most important goal, which at the time was getting him and my team out of the danger.

“What was so scary was being so limited by trying to carry someone, when I can’t pull my weapon up, while there are attack helicopters overhead and tanks firing through the woods. It was unreal – I’ve never experienced anything like that in my life.”

He said the mine – thought to have been remote-controlled – went off near Mr Arthur, “which has blown half of his leg off”, adding: “Trying to do this [first aid] mid-firefight while there are Russians shooting over us and around us is just so difficult.”

The wounded Mr Arthur, 42, from Stoke-on-Trent, Staffordshire, said: “All I remember is we got contacted, we advanced at the contact. Let out an RPG [rocket propelled grenade] at the positions. A few seconds later I was on the ground.

“One of the guys came to me straight away, put a tourniquet on. It was excruciating pain, with rounds incoming. Mortars, artillery, all that was coming in. I remember the guys grabbing me, saying: ‘Let’s go, let’s go’. We met a medic, he patched me up. Shot of morphine.

“You’ve seen the footage, you can hear rounds coming. I don’t remember much, it’s in and out. I remember being put on a stretcher the last kilometre. They got me out, man, they got me out.

“This type of stuff, this type of camaraderie is only forged in these situations. If the coin was flipped, it was one of those guys, I would have got them out.  I was a real lucky boy at the end of the day.  So many guys didn’t come back that day.”

Despite media attempts to represent the adventures of foreign fighters on the Ukrainian front lines as an example of their courage and fighting spirit, the footage and their own comments clearly demonstrate that Ukrainian units and foreign mercenaries are retreating from their positions under pressure from Russian forces.

The decision not to fight at close range with the forces led by Russia is rather a good option for foreign fighters, since if they are taken hostage, foreign mercenaries may face the death penalty in the Donetsk and Luhansk People’s Republics.