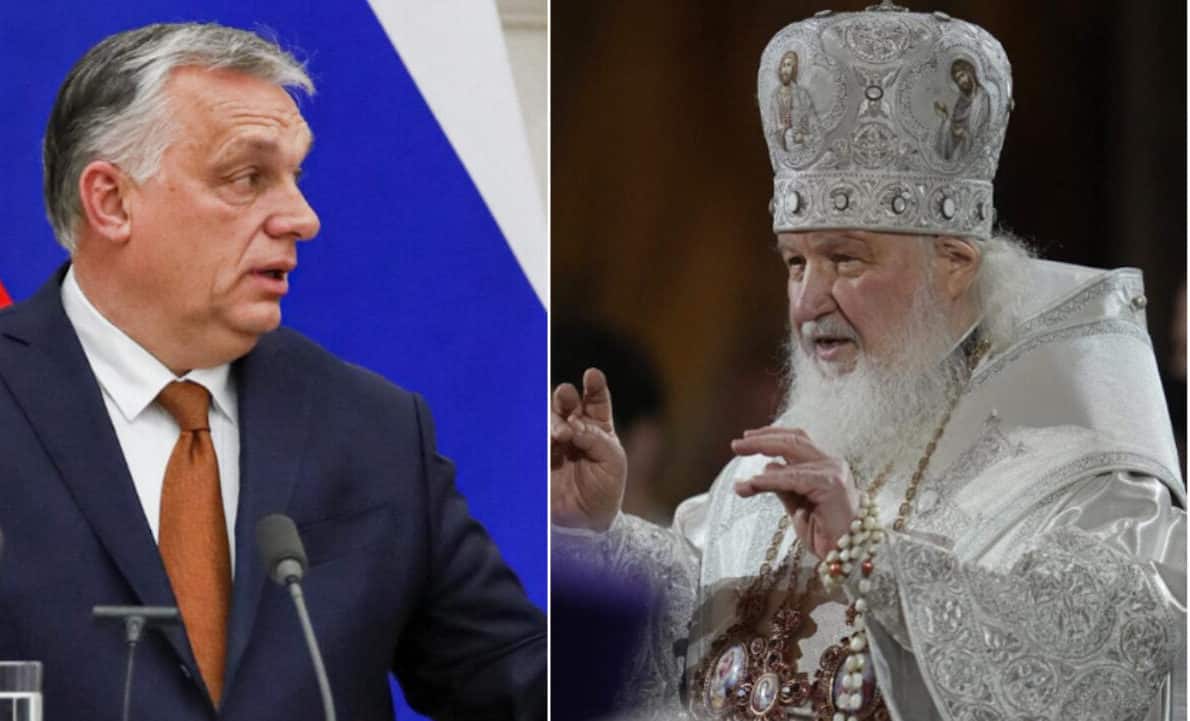 The Hungarian government has saved Orthodox Church patriarch Kirill from EU sanctions. The suffered “yes” of the other twenty-six EU executives to the latest claim of the Hungarian premier, Viktor Orban, allowed for the unblocking of the sixth package of sanctions against Moscow, proposed by the Commission a month ago, which includes a ban on importing oil from Russia.

Ships of Russian crude oil will stop arriving as early as the next few months and will be totally banned in EU ports from January 1, 2023. The derogations to oil arriving via pipeline, also wanted by Orban, will instead allow a small slice of Russian oil exports to continue to generate profits in the EU market.

Hungary’s new request was made during the last meeting of Coreper, the committee of permanent ambassadors of member countries to the Union. it was expected to formally approve the legal texts of the sixth package. The Hungarian government’s veto presented on Wednesday 1 June on the sanctions against the man of the church had caused a new stalemate at the tables in Brussels over the entire package.

Hence the choice to give in to Orban’s requests in order to give the green light to the sanctions agreed by the leaders at the European Council on Monday and Tuesday. The official signature of the document took place yesterday morning. Orban’s move highlights two other very important aspects. One of an energetic nature and one of an ethical nature. Let’s start with the latter.

The story of the head of the Orthodox Church of Moscow can be read as an attempt at revenge against a religious leader who did not justify the war but simply highlighted the claims of the most attentive observers of international geopolitics. But above all he has put his finger on the untouchable issue of Kiev’s support for LGBT culture…

As highlighted in dozens of reportages by Gospa News, the conflict in Ukraine has continued in the Donbass since 2014, when the Kiev regime put in power by the coup hatched by NATO with the help of George Soros decided to bloodily suppress the desire for autonomy of the majority Russian-speaking Republics of Lugansk and Donetsk, which thus became separatist and recognized as independent by Putin on February 22, 2022.

Up to that date, the Nazis of the Azov Battalion, a paramilitary organization of the Ukrainian National Guard (GNU) dependent on the Kiev Ministry of the Interior, had caused about 14,000 deaths, including 500 children.

The position of Patriarch Kirill, born Vladimir Michajlovič Gundjaev, was identical to that expressed by the international analyst Alessandro Orsini, academic of Political Sciences removed from the International Security Observatory of the Luiss University of Rome for having Putin’s reasons expressed in various Italian television broadcasts.

“Who is attacking Ukraine today, where the repression and extermination of people in Donbass has been going on for eight years? Eight years of suffering and the whole world is silent: what does it mean? ” was the rhetorical question posed by the religious.

But the head of the Orthodox Church of Moscow supports the thesis on the need to protect the Russian minority of Donbass and on the infiltration of Nazi criminals into the army of Kiev underlined in more detail by the Dossier on Ukraine of the archbishop of the Catholic Church Carlo Maria Viganò , former apostolic nuncio of the Holy See in the United States of America.

Both the Orthodox leader and the Catholic prelate also highlighted the decay of Western morality and the gradual political annihilation of the deepest Christian values ​​that took place in Kiev with the ostentation of the Gay Pride, organized by 2019.

THE ATTACK OF THE MOSCOW PATRIARCH TO GAY PRIDE

“If humanity recognizes that sin is not a violation of God’s law, if humanity agrees that sin is one of the options for human behavior, then human civilization will end there” is the tremendous prophecy of the chief of the Russian Orthodox Church delivered in one of his sermons that caused the Italian and world media to scream in scandal for his example on gay parades “designed to demonstrate that sin is one of the variations of human behavior”.

This position of the Patriarch of the Orthodox Church of Moscow on homosexual unions was adamantly expressed in a joint declaration with the Pope of the Catholic Church Francis I at the José Martí International Airport in Havana (Cuba) on Friday 12 February 2016 on the occasion of the meeting following the Pope’s apostolic journey to Mexico.

“The family is founded on marriage, a free and faithful act of love for a man and a woman. It is love that seals their union and teaches them to welcome each other as a gift. Marriage is a school of love and fidelity. We regret that other forms of coexistence are now placed on the same level as this union, while the concept of paternity and motherhood as a particular vocation of man and woman in marriage, sanctified by biblical tradition, is excluded from public consciousness. We ask everyone to respect the inalienable right to life. Millions of children are deprived of the very possibility of being born into the world. The voice of the blood of unborn children cries out to God (cf. Gen 4:10) “.

This is what the Orthodox Vladimir Michajlovič Gundjaev and the Catholic Jorge Mario Bergoglio wrote.

This is why Kirill has ended up in the crosshairs of the powerful LGBT Lobby, supported by plutarchs Soros and Bill Gates but also by Vatican circles that are heavily influencing Pope Francis I, and above all by self-styled Catholic statesmen such as US President Joseph Biden and the President. of the Italian Republic Sergio Mattarella.

That is why the Hungarian Prime Minister Viktor Orban has taken both sides. Both as a tenacious opponent of the culture of the Hungarian Soros Open Society, and as leader of the Fidesz party which, as he said after winning the elections for the fourth time (April 2022), “represents a patriotic and Christian conservative force. It is the future of Europe “.

Let us not forget that, as highlighted in various reportages, both the previous President of the EU Parliament, the late David Sassoli who passed away from a complication of the immune system following the anti-Covid gene serums, and even more the deputy Roberta Metsola called to take his place, have repeatedly exposed a propaganda in favor of gays that went far beyond their protection against all types of discrimination and violence.

This is why are disconcerting the applause given by authoritative exponents of the Christian community in Italy to the decision of the Orthodox Church of Kiev to distance itself from the Moscow Patriarchate, on which it historically depends, to start a dialogue with the headless Ukrainian schismatic church that arose, with more political than religious motivations, by the will of the former Ukrainian president Petro Poroshenko and obtained recognition from the Patriarchate of Constantinople.

THE FAILURE OF THE ENERGY SANCTIONS AGAINST RUSSIA

In terms of energy, however, awareness of the failure of the sanctions against Moscow is beginning to make its way among the rulers of the EU countries.

Eventually Austria, Germany and Italy authorized their energy companies to pay for gas in rubles, that is, by paying it into Gazprom’s current accounts in Russia as desired by Russian President Vladimir Putin for a self-defense device: Moscow banks cannot in fact be frozen as occurred in the context of the sanctions for some European branches.

At the same time, Gazprom suspended the supply of gas to the Netherlands and Denmark, which refused to comply with the Kremlin decree and, as already done by Poland, Bulgaria and Finland, which confirmed the end of supplies.

“Gas to Europe with Payment in Rubles only”. Putin’s Checkmate to the NWO: Either gives way or the Third World War begins

This has created a clear rift in the management of the energy emergency and, above all, has allowed the ruble to recover from the collapse suffered immediately after the start of the war in Ukraine and the first sanctions against Russian companies and the handsome oligarchs abroad.

The stop to crude oil ships decided by Brussels, “combined with the national decisions taken by Germany and Poland, will reduce Russian oil imports by 92% by the end of the year”, announced the French presidency of the EU Council after the approval of the new sanctions against Russia by the European ambassadors.

But a sign of bitterness for the European Union comes from India.

Ukraine War: Journalist and Academic Banned by Italian TV due to they Spoke about the Putin Reasons. Press Freedom Collapses

According to data published by the financial analysis platform Refinitiv Eikon and relaunched by Reuters, since February, when Vladimir Putin launched the invasion of Ukraine, India has imported 34 million barrels of Russian oil at a discounted price, more than 10 times the value of total imports from Russia in a year.

As Russia Today recalls: “Last year, exports of Russian crude to India averaged only 960,000 barrels per month, about 25 times lower than this month’s total. Western sanctions against Moscow have created an opportunity for Indian refineries to increase purchases of Russian oil (mainly Ural crude) at discounted prices, as some European customers have been openly reluctant to buy Russian crude.”