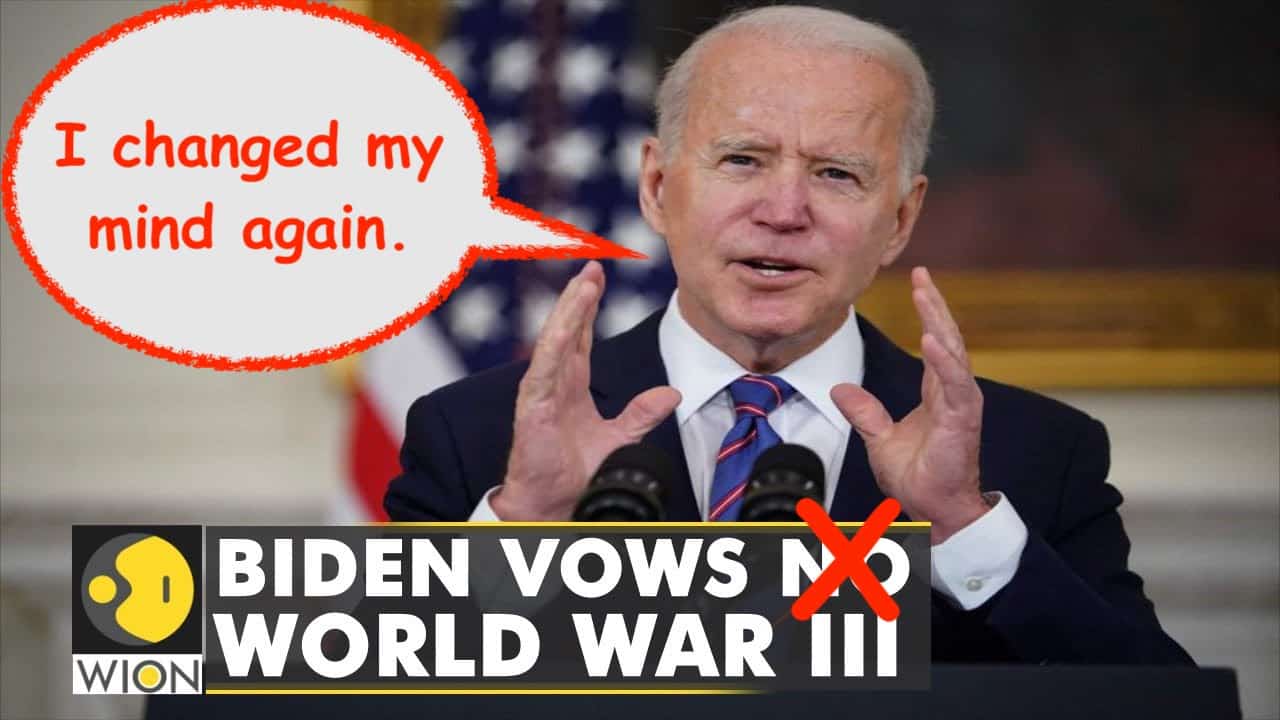 During the last week of May, the White House leaked an alarming story: Biden was preparing to send medium-range advanced rocket systems to Ukraine. Those rockets could be used by Ukrainian forces to hit targets in Russia. If that happened, Russia would undoubtedly retaliate and escalate—possibly by striking a NATO country bordering Ukraine. That could trigger Article 5, which would theoretically bring all of NATO, including the US, into the war. Within days or even hours, nuclear bombs could be raining down on American cities.

Then on May 30 Biden walked back the leak, saying that the US was “not going to send to Ukraine any rocket systems that can strike into Russia.” The world breathed a sigh of relief.

But the relief was short-lived. The very next day, Biden flip-flopped once again, announcing that, contrary to his previous announcement, the US would indeed be sending M142 High Mobility Artillery Rocket Systems to Ukraine. With a range of up to 190 miles (with the longest-range munitions) the M142 HIMARS could, if fired from Ukraine, hit much of western Russia. Moscow, the Russian capital, is less than 280 miles from the border…

continue reading with a subscription to my Substack…

…and if you’re too broke to subscribe, here is a free translation of key portions of a terrific new article by French political scientist Éric Denécé:

THE UNDENIABLE RESPONSIBILITY OF KIEV IN THE CONFLICT

If Russia is clearly the aggressor in this conflict, those who pushed it to attack are undoubtedly the United States, NATO and the Zelensky government. It is essential never to forget this. If American leaders had not reneged on their promises to Moscow, if NATO had not been constantly expanding, if France and Germany had been able to force Kiev to respect the Minsk agreements, and if Zelensky and his clique had not listened to the disastrous advice of their American mentors, we would not be here. Though there is no question of excusing Russia, to blame it alone for this conflict is a misrepresentation of reality, if not deliberate disinformation.

Since 2014, Kiev has conducted an absolutely reprehensible policy towards the Russian-speaking populations of the Donbass, prohibiting the use of their language, refusing any autonomy within Ukraine, and inundating them with harassment, embargoes and artillery fire —while nobody in Europe is allowed to denounce this scandalous situation, on the pretext that it would echo Russia’s arguments.

Similarly, the West has allowed Zelensky and the oligarchs who sponsor him – notably Kolomoïski – to finance neo-Nazi groups to reinforce his army in order to take over the autonomist regions by force, rejecting any attempt at conciliation. Worse, on February 17, Kiev deliberately launched its attempt to reconquer the republics of Donetsk and Lugansk with the support of NATO, knowing full well that Moscow could not fail to react, thus triggering the current crisis.

Though the Russians exaggerate concerning the denazification of Ukraine, their words are not without foundation. Individuals and units with extremist values ​​– Azov and Aidar “battalions”, Svoboda and Right Sector parties, etc. – are a reality that the West seeks to minimize in its support for Kiev, despite the fact that their abuses since 2014 have been proven.

Europeans have therefore become shameless allies and funders of a regime that protects and finances neo-Nazi groups while we fight in each of our countries against the extreme right. These Ukrainian extremists are not harmless nationalists as they would have us believe. Their speech is clearly anti-Semitic and their fighters wear the insignia of the infamous Das Reich division on their uniform. That Ukrainian-majority division was responsible for the Oradour sur Glane massacres in 1944.

Let us note in passing the most glaring paradox: the support of Germany – especially its very militant Foreign Minister Annalena Baerbock of the Green party – for the Zelensky regime even though the latter integrates to the highest level of its army the supporters of an ideology born across the Rhine and once believed to have been eradicated since 1945. But we are no longer on the verge of a contradiction…

It must also be remembered that Ukraine supported politically and through its arms sales the totalitarian and genocidal regime of Azerbaijan in its military operation against the Armenians of Nagorno-Karabakh in 2020 who were demanding their independence after decades of persecution. Kiev even celebrated Baku’s victory by adorning its cities with the colors of Azerbaijan even though this country harbored thousands of Syrian jihadists during this conflict who have committed numerous atrocities on Armenian soldiers and civilians.

In short, we have recklessly taken up the cause of a dubious, highly undemocratic  regime that shamelessly violates the right of peoples to self-determination. Under Zelensky’s injunctions, Europe has found itself embroiled in a conflict which should not concern us given the share of responsibility of the Kiev government which knowingly played with fire …

Kiev’s hard-line policy is clearly decided in Washington with the support of the very pro-American Baltic States—especially Poland, which reaps windfall profits and dreams of recovering Ukrainian territory. This policy is completely ineffective. It is also dangerous, because it increases the risk of a major conflict.

Yet the United States and NATO continue to deliberately push Zelensky down this disastrous path, encouraging him to refuse any negotiations or concessions vis-à-vis Moscow, thus contributing directly to prolonging a conflict that Ukraine cannot win and in which the number of civilian and military casualties increases daily, destroying Ukraine without significantly weakening Russia.

That is why it is urgent to achieve a rapid cessation of hostilities and a return to peace. We call for negotiations between the various parties (Ukrainians, populations of Donbass, Russians) and for their respective interests to be taken into account.

We recall that there is a geopolitical law that no one can flout without consequence: no State can ensure its security to the detriment of its neighbour, especially when the latter is more powerful. The United States has always applied it without anyone finding fault. By ignoring it, apparently deceived by Machiavellian encouragement from Washington, Zelensky and his entourage were misguided.

– this war would never have taken place if NATO, an organization which should have been dissolved at the end of the Cold War, had not violated its promises to Moscow and extended its influence to its borders;

– it is a war that the Ukrainians cannot win, despite financial, political and material support from the West ;

– Kiev’s stubbornness only increases the civilian and military losses, the destruction of the country, and the territorial gains of Moscow.

Unfortunately, it is clear that the way out of the crisis is compromised because we Europeans are in a situation of more or less pronounced co-belligerence which does not allow us to play the role of mediators. Above all, the Americans have no interest in seeing this conflict end quickly, because it is profitable to them. They just added fuel to the fire by delivering to Ukraine four long-range M142 HIMARS rocket launchers, capable of reaching Russian territory. The equally hawkish British also announced on June 6 that they would deliver M270 multiple rocket launchers to Kiev.