I have shown in numerous columns how the vast majority of U.S. government officials (along with the news media, financial institutions and entertainment industries) are bought and paid for by the ubiquitous juggernaut known as the Israeli lobby. Making sure Israel is not offended is the highest priority of virtually every elected official and bureaucrat in Washington, D.C.

Here’s a report written for Reason.com by Christian Britschgi that illustrates what I’m talking about:

Rep. Thomas Massie (R–Ky.) is stoking outrage for being the lone dissenting vote on a seemingly unobjectionable resolution condemning antisemitism. But the congressman’s opposition looks a lot more reasonable considering the resolution’s implications for free speech and internet regulation.

On Wednesday, the House of Representatives passed H.R. 1125, which broadly condemns antisemitic speech and violence while also endorsing calls for more online monitoring and censorship of antisemitic views and conspiracy theories.

Politicians demanding social media companies adopt certain content moderation policies or priorities inherently raises free speech concerns, even if those demands are in the form of a nonbinding resolution. 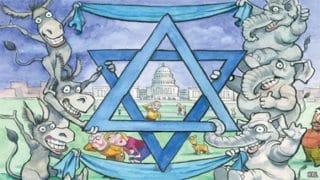 The implication that social media companies will suffer political or regulatory consequences is inescapable, even if it does come with a free speech proviso.

That’s particularly true in this context. The primary author of yesterday’s resolution, Rep. Debbie Wasserman Schultz (D–Fla.) has pinned some of the blame for the fatal shooting in Buffalo, New York, on social media companies’ amplification of “radicalizing content and conspiracy theories.”

The task force’s first briefing in November 2020 featured presentations from groups also calling for Section 230 reform and holding platforms and their executives accountable for antisemitic speech.

Given that the Department of Homeland Security shouldn’t exist, expanding its funding doesn’t sound like a good idea. One can see why a libertarian-leaning budget hawk like Massie wouldn’t like that provision either.

It goes without saying that antisemitism, like any sort of racial or religious bigotry, is horrible. But the House’s resolution does more than merely condemn it. Rather, it calls on social media companies to suppress otherwise protected speech and endorses more federal spending. That’s reason enough to oppose it.

Universal obeisance to the Covid tyranny showed the totalitarian elite that the world (including the United States) is ready for a serious plunge into subservience. And being that one cannot distinguish between the globalist New World Order and the global Zionist hegemony, it could be expected that the thing that would be first on the tyrant’s to-do list would be all-out war against free thought and expression—especially when it comes to the globalists’ sacred cow: Israel.

Freedom, constitutional government, balanced budgets, State sovereignty, individual Liberty: It all takes a back seat to bowing to Tel Aviv.

The 420 House members who voted for the chilling resolution mentioned above are truly nothing more than sniveling toadies for Israel. They put the weight of the U.S. House of Representatives (I’m sure the Senate will quickly follow suit) on the side of Orwellian tyranny. It’s only a matter of time before any spoken or written word that dares to speak truth—truth that might offend the Zionist elite—will be categorized as “antisemitism” and smitten from the public square.

But the omnipresent shadow of power that is the Israeli lobby reaches much farther than Washington, D.C. It casts its demonic spell on states and local communities as well. So far, 35 states have passed anti-BDS (Boycotts, Divestment and Sanctions–toward Israel) laws. Here is the list:

Observe that these states include both the deep-blue and the deep-red. Party affiliation means nothing; the Israeli lobby controls them both.

These anti-BDS laws are blatant unconstitutional abridgements of the freedom of speech, religion and commerce. Imagine passing laws that citizens of the several states will be denied their individual liberties to speak and spend—or not spend—their hard-earned dollars in subservience to a foreign power, if that power was not Israel. But because it IS Israel, constitutional, commercial and religious liberties are thrown in the sewer.

What evangelicals don’t realize—and don’t want to realize, because they have been totally brainwashed with Christian Zionism—is that the intention of the Zionist elite is to totally prohibit not just political speech but religious speech as well. They will not be satisfied until New Testament theology is thoroughly purged from the minds and hearts of the American people—and that includes its churches.

Of course, they have already achieved much of that goal as evidenced by this report in The Washington Times.

Another recent indicator of the absolute sway of Israeli power over America is Washington’s total lack of concern over the Israeli assassination of a Palestinian-American journalist a few days ago.

Palestinian-American journalist Shireen Abu Akleh’s death should have marked a turning point for the United States government’s approach to the protection of journalists overseas – but when an allied nation [Israel] could be to blame, that becomes a problem.

Abu Akleh, a veteran journalist who worked for Al-Jazeera, was many things: she was a Christian and a brave reporter, but to most Palestinians she was a beloved household name who many grew up watching on TV. Her death came as a shock, not the least because eyewitness journalists said Israeli forces shot her in the head with live ammunition, during a raid on Jenin Camp in the West Bank.

But why should we expect the White House and Pentagon not to cover up the story of Israel’s murder of an American journalist when they covered up Israel’s murder of 34 U.S. Navy servicemen and even conspired to assist Israel in a coordinated attempt to sink the USS Liberty and kill all 294 Sailors and Marines on board.

Even more disturbing—in fact, it is downright unconscionable—we have come to expect America’s evangelical Christians not to care one whit that the journalist assassinated by the Israeli military was a sister in Christ.

Why should evangelicals care about one more Christian being murdered by Israel? They haven’t cared—not the least little bit—that Israel has murdered millions of Christians since 1948.

When it comes to Israel, there is no Constitution, no law, no freedom, no conscience, no decency, no morality, no ethics, no integrity, no honesty and nothing sacred. All there is is raw power, corruption and lots and lots of money.

Thomas Massie just might be the only member of the U.S. House of Representatives who is not a bought-and-paid-for lackey of the Israeli lobby. His lone dissenting vote on the resolution above demonstrates a heart and mind reminiscent of Patrick Henry, James Otis, Thomas Jefferson, George Washington, Benjamin Franklin, Sam Adams—and Ron Paul.

His lone dissenting vote also exposes the rest of the Congress for what they really are: hirelings of Israel’s Big-Money lobbyists.