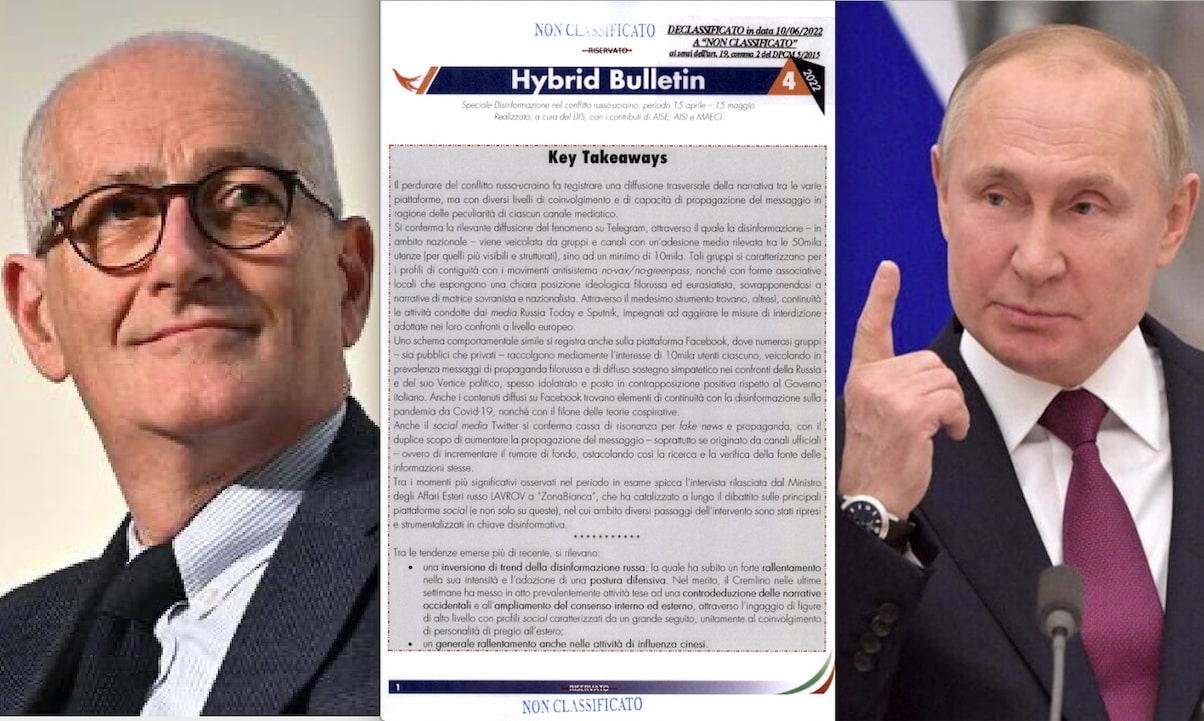 On the cover image Franco Gabrielli, authority on Department of Italian Security, the Hybrid Bulletin and the Russian president Vladimir Putin

The Italian intelligence agencies have compiled a list of politicians, journalists, opinion leaders who denounce the crazy war caused by NATO in Ukraine, first with the 2014 coup and then with the legitimacy of the bombings carried out by the Kiev army after a sensational false-flag on a mock attack in the Donbass.

Those like me who have known well the history of the pro-Russian separatist republics of Donetsk and Lugansk since 2014 know very well that even Western journalists like the Italian Andrea Rocchelli were massacred by the Ukrainian National Guard, in which the Nazis of Azov Battalion operate, to prevent them from being able to write the truth.

Now the 007 of the Italian secret services have gone hunting for those who tell the TRUTH by denouncing the war crimes covered by NATO since 2014 even if the political representative who took responsibility for the Hybrid Bullettin(link below) denies any involvement of intelligence, moreover obvious.

The document, if ever it were still needed after the dozens of massacres covered up and sidetracked in Italy, confirms an extremely superficial vision that with a Nazi-Fascist tissue setting, declares as FAKE-NEWS anything that comes from alternative sources to those controlled by NATO and from the European Union according to a project already anticipated by Gospa News in November 2021.

«Counter information warfare: Information warfare during a crisis, in combination with cyberattacks and subversive actions, could have significant destabilizing and paralyzing effects on Western societies as well as on allied forces. Therefore, fostering state and societal resilience against all forms of hybrid warfare, including malicious cyber activities and disinformation, is NATO’s first line of deterrence and defense and a precondition for the EU’s ability to act successfully. Host nations’ civil and military authorities, together with commanders of transiting and deployed forces, should closely coordinate to develop a common approach to countering disinformation if they are to respond swiftly and effectively».

Under the heading “resilience” these sentences are found in one of the crucial passages of the report drawn up by a think tank of retired NATO generals on a plan for a more effective militarization of Europe. The project, drawn up in an Atlantist and extremely Russophobic key with 5 potential war scenarios.

Please note that reference is made to “hybrid” war which is the same name given to the dossier on alleged “pro-Putin” activists created by the Department of Information for Security (Department of the Presidency of the Council of Ministers of the Italian Republic, therefore of a totally policy) together with the Ministry of Foreign Affairs (MAECI), the 007 intelligence of AISE (Italian Foreign Services Agency) and AISI (Italian Internal Services Agencies), and under the coordination of the former director of AISI Franco Gabrielli.

The plan for counter-offensive and military mobility appeared disturbing because it had already been launched in 2020 by the Center for European Policy Analysis (CEPA), based in Washington, thanks to the collaboration with authoritative NATO commands (such as the Allied Joint Force Command of Brunssum and of Naples), and strategic military offices of the European Union but, above all, it was financed by the usual Weapons Lobby that conditions and is part of the Deep State projected towards the New World Order by the Covid-19 pandemic.

The role of arms corporations in instigating a lucrative war in Ukraine is undisputed and easily deducible from our Weapons Lobby 5 investigation. As also remarked by the American presidential candidate Tulsi Gabbard well before the start of the Russian military operation.

This is why the official declarations of the Undersecretary of State to the Presidency of the Council of Ministers Franco Gabrielli appear at least ambiguous who, by virtue of his past as director of the SISDE and AISI secret services, was appointed by Prime Minister Mario Draghi as Delegated Authority for the Security of the Repubblica but now denies the involvement of intelligence in the “bulletin” to the point of making the “smell of burning” even stronger …

“There is no Big Brother, no Specter in Italy: no one wants to investigate people’s opinions,” he said in a press conference called by Palazzo Chigi (PM seat), regarding the Russian disinformation bulletin declassified yesterday

“Opinions are always respected, what is different are fake news and their orchestration which, if ascertained, could be the subject of another type of activity”, said Gabrielli, underlining that “the only antidote to propaganda is free information, everything that is a different thought is a wealth “.

Gabrielli, having dealt with intelligence and perhaps little philosophy, perhaps ignores that the government also defines fake-news as vaccine deaths ascertained by the judiciary who cannot proceed with the criminal shield imposed by the government itself.

In fact, in the “dossier” an explicit comparison is made between supporters of the truthfulness of news from Russian sources on Ukraine with the NO VAX narrative.

“The report – he explained – was aware of the staff, the 4 bulletins had never highlighted any particular significant emergencies which were specifically represented by me to the Prime Minister. The report was sent to Copasir. It was registered on June 3 and Copasir received it on June 6 “. Copasir is the Parliamentary Committee for the Security of the Republic is an organ of the Parliament of the Italian Republic which exercises – or should exercise, given the results in recent years – parliamentary control over the work of the Italian secret services.

Appealing to bureaucratic quibbles, Gabrielli even denies the involvement of the 007s which instead is evident in the title of the dossier. The Delegated Authority for the Security of the Republic underlines the “persistence of a smear campaign about an alleged dossier activity by the intelligence community (in reality non-existent)”.

But from the CEPA dossier published in November by Gospa News it appears that the military leaders of NATO and the EU had “counter-information” in their sights.

It makes a little smile that intelligence has done an unintelligent job avoiding mentioning sites such as Maurizio Blondet’s blog, international correspondent of various newspapers for many years, or our own portal where I write also as a correspondent for American online newspapers of geopolitics and intelligence strongly critical of the policies of the Atlantic Alliance in Ukraine as well as in the Middle East.

The explanation is simple. Many sites such as Gospa News have already been blacked out on social media  also because they are considered “Russian-wire” although they are instead committed to unveiling all the atrocities committed even by the jihadists of Al Qaeda and ISIS thanks to NATO coverage .

This time it was up to others to end up in the crosshairs because thanks to TV they had gained too much visibility on social networks.

Don’t worry too much. When we can no longer stand it we will go to write in some of the African countries where the freedom of the press is much more respected than in Rome where the sinister and ancient shadows of mafia culture continue to hover.

Ukraine War: Journalist and Academic Banned by Italian TV due to they Spoke about the Putin Reasons. Press Freedom Collapses