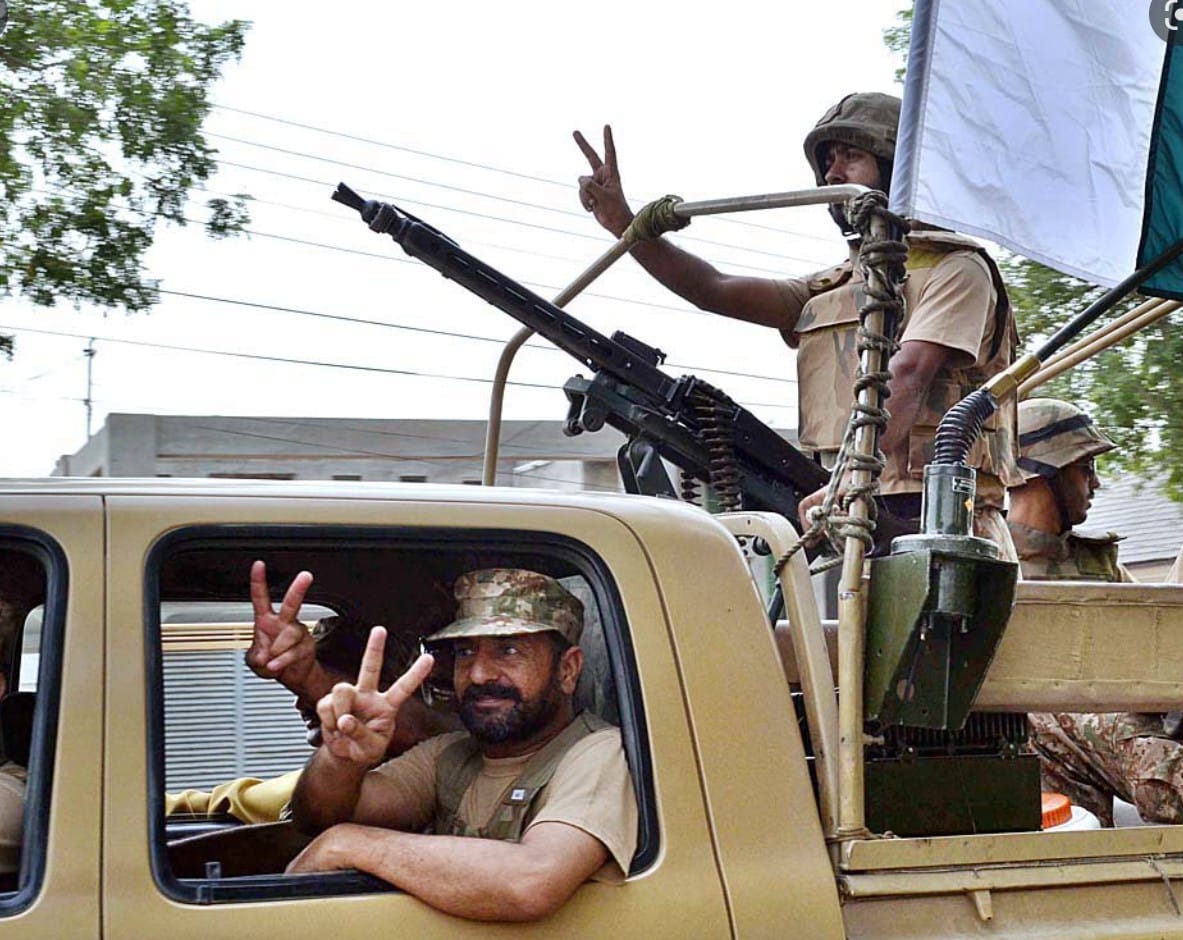 Before the start of the military operation Zarb-e-Azb (Sharp and Cutting strike), terrorists had been, primarily, waging a war against the citizens of Pakistan, their values, beliefs, and assets. 200 million people in the country had been facing various kinds of terrorism-related attacks, being conducted by the AI-Qaeda, the Islamic State group (Also known as Daesh ISIS and ISIL), and other militant outfits. But, unlike other countries’ war against terrorism, including the US-led Western countries’ war against these non-state actors, Pakistan’s Armed Forces displayed unbelievable progress through the Zarb-e-Azb which started on Jun 15, 2014, against the militants in North Waziristan Agency (NWA) and afterward extended to other tribal areas, has almost, successfully, achieved its objectives.

Addressing the Defence Day and Martyrs Day ceremony on September 6, 2017, the then Prime Minister Imran Khan saluted the valor and sacrifices of the Armed Forces which stood strong against all odds in the aftermath of 9/11 and the unconventional war which followed to safeguard the country’s interests.

Speaking on the occasion, Chief of Army Staff Gen. Qamar Javed Bajwa stated: “The country passed through a very difficult phase during the past two decades…Our forces and nation have rendered sacrifices in the war against terrorism…Our houses, schools, and leaders were attacked. Efforts were made to weaken us internally.” Noting that more than 70,000 Pakistanis were martyred and injured in this war (2017), the army chief vowed to collectively fight this menace of terrorism.

Earlier, showing the progress of the Zarb-e-Azb, the then Chief of Army Staff, Gen. Raheel Sharif said, “Terrorists have been cleared from their strongholds in North Waziristan and Khyber Agency and right now is moving into last few pockets close to the Afghan border.” He laid emphasis on the “continuation of the operations till elimination of the least expected and probable terrorist groups and sanctuaries.”

When the Pakistan Government decided to launch this operation, the then Director-General of Inter-Services Public Relations (ISPR), Major-Gen. Asim Saleem Bajwa had pointed out: “Armed forces of Pakistan have launched the operation against foreign and local terrorists…who had been waging a war against the state of Pakistan by disrupting our national life in all its dimensions, stunting our economic growth and causing enormous loss of life and property…with the support of the entire nation, these enemies will be denied space across the country.” He further stated that military operations would continue till the achievement of ultimate objectives.

After the militants of the Tehreek-e-Taliban Pakistan (TTP) massacred 132 school children at an Army school in Peshawar on December 16, 2014, emphasizing national unity against terrorists, Gen. Raheel had repeatedly stated, “Our resolve has taken new height”, and added “We will continue to go after the inhuman beasts, their facilitators till their final elimination.”

However, on June 15, 2014, the jets of the Pakistan Air Force started bombing militants’ hideouts in North Waziristan Agency and Khyber Agency and killed thousands of insurgents, including foreign militants, while Pak Army also killed several terrorists through ground offensive and many of them surrendered before the Army. Thus, these forces destroyed their strongholds, demolishing tunnels and factories producing IEDs (Explosives), while drying the sources of their funds and sinking their public support.

In fact, the different war between Pakistan’s Armed Forces and the TTP insurgents (And their affiliated groups) is simply a ‘clash of wills’ between two entities. Military thinkers agree that although the physical force will determine the type and scale of war, it is the ‘will to fight’ or ‘moral force’ that determines the outcome of the war. Clausewitz puts it this way, “One might say that the physical force seems little more than the wooden hilt, while moral factors are the precious metal, the real weapon.”

In his book, “Fighting Power: German and U.S. Army Performance, 1939-1945”, Creveld identifies the elements of ‘moral force’, whom he calls “fighting power, the willingness to fight, and the readiness, if necessary, to die.” The greater these elements, the less vulnerable an armed force will be to demoralization. ‘Moral force’, then, is the crucial factor in determining the combat power of any belligerent.

During the successful military operation, Zarb-e-Azb’s” retreat of the Taliban from NWA and other vulnerable tribal areas (Before merger in KP)  proved that such elements like ‘will to fight’ and ‘moral force’ have been more found in Pakistan’s Armed Forces than the Taliban insurgents.

Nevertheless, there are other causes that also demoralized the TTP militants and their affiliated outfits. Firstly, strong determination and cohesiveness as noted in Pakistan’s Armed Forces played a key role, while during street-to-street fighting, without bothering for their lives, and by air-dropping commandos at the risky places, our forces made great headway in disrupting the Taliban supply routes, and links. Secondly, the general masses of the area opposed the brutal acts of these terrorists which compelled them to leave their houses. They came to know that under the cover of Islamic laws—terror, not Sharia was these militants’ real agenda. Hence, they were misusing Jihad which does not allow suicide attacks in killing their own Muslim brethren.

Undoubtedly, Pakistan’s Armed Forces and the country’s primary intelligence agency ISI have successfully broken the backbone of the foreign-backed terrorists. Peace has been restored in the provinces of Balochistan and Khyber Pakhtunkhwa (KP), including Karachi, and other vulnerable regions.

But, in the recent past, terrorist attacks in Pakistan’s various provinces, especially Balochistan show that the CIA-led Indian RAW and Israeli Mossad are destabilizing Pakistan. These intelligence entities want to damage the China-Pakistan Economic Corridor (CPEC) which is part of China’s One Belt, One Road (OBOR) initiative or BRI, as Washington and New Delhi have already opposed this project.

It appears, as if the militants of TTP have lost major grounds, and in severe frustration, they are trying to create some kind of so-called pressure on the government and the Armed Forces through some terror activities which are due to external support of some foreign secret agencies to these terrorists, as they want to weaken Pakistan which is the only nuclear country in the Islamic World. However, Armed Forces have castigated these terrorist outfits to put up strong resistance.

The international community knows very well that Pakistan’s Armed Forces have successfully defeated the externally-backed terrorists by the military operations Zarb-e-Azb and also through Radd-ul-Fasaad (Elimination of Strife).

It is mentionable that particularly the NWA is the largest tribal agency with difficult and complicated topography. Despite it, NWA and some other tribal areas have been cleared by the Pak Army.

This is noteworthy that the Taliban fighters on August 15, last year entered the Afghan capital Kabul and seized power, taking control of Afghanistan. The Taliban-led government clarified that Afghan soil would not be used for any terrorist groups like Al-Qaeda, ISIS, and TTP for terror attacks against neighboring countries, including Pakistan. But, regarding some recent terror attacks, sources suggested that some militants have entered Pakistan from Afghanistan. Hence, Islamabad has warned Kabul to check this infiltration.
Meanwhile, surprisingly, Federal Information Minister Maryam Aurangzeb on June 3, 2022, acknowledged that Pakistan was negotiating a peace deal with the banned group TTP, and the Afghan Taliban were acting as mediators between the two sides, while Pakistan welcomed the ceasefire announced by the banned TTP.

Nonetheless, terrorists had challenged the writ of the state and had frightened the entire nation with their terror acts. Therefore, leaders of various political and religious parties as well as all segments of society and media anchors—analysts, wanted that a handful of terrorist elements must not be allowed to dictate their agenda and impose their self-perceived ideology on the majority of Pakistanis have admired the successes achieved during the operation Zarb-e-Azb. Now, the whole nation is united against terrorism and is supporting the military operations against these brutal militants in other vulnerable regions of the country.

As a matter of fact, Pakistan is the only success story in the world in the war against terrorism. Three tiers—the state, people, and Law Enforcement Agencies jointly fought the war, which was the main reason behind its unprecedented success. No country in the world history has come out of the menace of terrorism as fast as Pakistan. Notably, the war on terror has had multifaceted ramifications for Pakistan such as political instability, the lapse of security, economic crisis, and socio-cultural repercussions.

The unbelievable progress of Operation Zarb-e-Azb can be judged from the fact that what the well-equipped and well-modernized US-led NATO countries could not do in Afghanistan in nearly 20 years, Pakistan’s Armed Forces had done in almost 20 months. Taking note of the ground realities, the US and other Western countries have started appreciating the capabilities of the Pakistan Army and other security agencies.