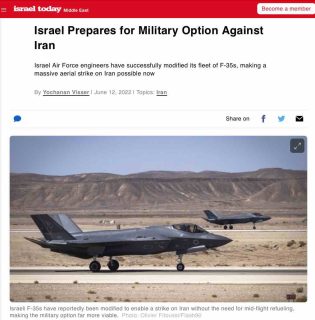 Israel is desperately hurling threats at Iran. Some say the only way Naftali Bennett can unite the fractious factions of the Zionist entity is by brandishing the specter of an external enemy. But even if he uses fear to whip his coalition into line, the long-term prospects of the Zionist entity illegally occupying Palestine are bleak. Demographics, the decline of the Zionist-occupied US as a global hegemon, and the rise of the Axis of Resistance all spell doom for the self-styled Jewish State.

So is that why they’re emptying Ukraine of its people? Are the Khazars planning to return to their real ancient homeland?

That’s what Richard Cook thinks. Cook is the very sharp former US government analyst who blew the whistle on the Challenger disaster coverup.

Is Richard Cook onto something? Read the article and decide.

Call it a conspiracy theory if you like, but I have read in more than one place that the hidden agenda of the US in Ukraine is to create a new homeland for people from Israel who want to migrate there in order to get out of what increasingly is becoming a failed state headed for collapse.

It’s easy to ridicule this theory, but I think there’s something to it.

Israel does look more and more like a failed state. It consists of a handful of Jewish people—fewer than nine million—clinging to a dry and inhospitable patch of rock and sand on the eastern Mediterranean coast, where they are isolated amid a vast human ocean of Muslim populations and culture.

I say this not as someone who is either anti-Semitic or an opponent of Israel. I am not anti-anyone nor an opponent of any people, ethnic group, or nation. In fact I am immensely sympathetic toward anyone caught up in the absurdities and violence of life in the world today.

But let’s be realistic. Look at Israel’s present condition. But first back up a bit. It’s a commonly-held belief that the British originally acquiesced in designating Palestine as a future homeland for Jewish people as an attempt to establish a pro-Western beachhead in a region rich in mineral wealth. Fast forward nearly a century to the US’s War on Terror, which has failed miserably. This was a campaign that was obviously meant to run interference for Israel in its emergence as a leading regional power within the Middle East, or maybe even a global power. Or at least to prevent it from being eventually obliterated by enemies on every side.

Look at the number of nations the War on Terror was meant to take out. According to US General Wesley Clark, the American hero of the bombing of Serbia in the late 1990s, the inventory of nations to be subjected to pro-US regime change was to include, with Afghanistan then already occupied, Iraq, Syria, Lebanon, Libya, Somalia, Sudan, and Iran.

Now, the War on Terror has largely been abandoned after more than twenty wasted years at the cost of untold trillions of dollars. Though the US crushed and humiliated Iraq, that nation has come back to the point of legislating a complete ban, up to the death penalty, on any normalization of relations with Israel. Lebanon is an economic disaster, but is largely controlled by Israel’s arch-enemy Hezbollah. Iran remains independent and defiant, despite US threats and sanctions.

The US tried to use terrorist cadres akin to Al Qaeda to destroy and take over Syria, but Russia sent forces to prevent that, and Syria has been able to rejoin the Arab League. And Israel’s failure to make peace with the Palestinians has turned it into an international pariah. Plus, after years of occupation, Israeli settlements in the West Bank are islands in a war zone, while its cities are armed camps. Despite incentives for Jews living abroad, emigration to Israel is virtually non-existent. Almost no one, except fugitives and/or money launderers, is crazy enough to want to move there.

Moreover, Israel’s economy is weak and continues to depend on US aid and donations from American Jews for sustenance. Those predicting a short-term existential crisis and collapse include not just Israel’s external opponents, but many intelligent and influential Israelis themselves. And with both Turkey and Saudi Arabia increasingly aligning with Russia, the influence of America as Israel’s protector is on the decline.

So I wouldn’t be the least bit surprised if part of the US plan for wresting Ukraine away from Russia, a plan which has been ongoing for more than thirty years, ever since the breakup of the Soviet Union in 1991, may always have been to capturing it as a Jewish refuge from the failure of the Israel project. And we know that the US government’s attempt to seize Ukraine away from Russian influence has been spearheaded by the faction of the Neocons that largely instigated the pro-Israel War on Terror. The Neocons are led by such figures as the State Department’s Victoria Nuland and her husband Robert Kagan, co-founder of the Project for a New American Century, and from his post at Brookings, one of Washington’s leading war hawks.

Thus I believe that the Neocons’ plan may have been for the US to use the Ukrainian junta they installed in 2014, headed now by Zelensky and formerly by Poroshenko, both Jews, but aided by such neo-Nazis as the Azov Battalion, to drive the ethnic Russians out of the country. This was to be done, and had already started, by a campaign of intimidation and terrorist bombardment, with genocide if necessary.

So was it done possibly in order to make room for Israeli immigration? We don’t know for sure, but Zelensky even told us that when all was said and done, Ukraine would end up being governed “like Israel.”

Unfortunately for the Neocons, Russia under Vladimir Putin had other ideas, which brings us to where we are today. Even so, there may still be room for the Israelis in whatever rump of a Ukraine is left after Russia absorbs the Russian-speaking lands in Ukraine’s east and south. What will remain of Ukraine will be vastly under-populated, after the departure of so many refugees, so that nine million Israelis would have no problem moving right in. But they might need Russia’s permission.

In my opinion, Russia would be wise to grant it under the condition that Ukraine function as a demilitarized neutral state. I think that the sensible ones among the Jewish population would find that acceptable. After all, under Putin’s regime the Jews now living in Russia itself have assimilated as good citizens of the Russian Federation.

Richard C. Cook is a retired federal government analyst. His articles contain his own professional assessment of the topic under consideration.