[ Editor’s Note: Stu revisits a lost cause that has disappeared down the rabbit hold while new ones, including a potential WWIII are on the horizon. The UnUnited Nations seems to have lost its Palestinian file, and world media seems to have lost interest.

The last story that got any exposure was the female Palestinian journalist that took a bullet through the head while covering an Israeli ‘security’ operation in the West Bank.

Stu has focused his beef today not on the UN or the media, but the World Council of Churches which has contributed only at the lowest possible level, calls for others to do something about the plight of the Palestinians.

The WCC has a huge bully pulpit which it appears to save for other issues that are more easily fixed, while taking a pass on the Palestinian/Israeli Gordian Knot that remains unmolested to this day with no sanctions placed on Israel which would get its attention very quickly.

I remember the quote I got from an interview with the Latin Patriarch of Jerusalem two decades ago in Atlanta with Jim Clancy, a good closing statement from Patriarch Michel Sabbah, “The Palestinians, they are not crying for nothing,” a plain but concise description of their tragedy.

At the time, he and I agreed that Jerusalem should have been an international city administered by the UN, with access to all under its protection. But such practical solutions are often dismissed out of hand by the pretenders at the UN… Jim W. Dean ] 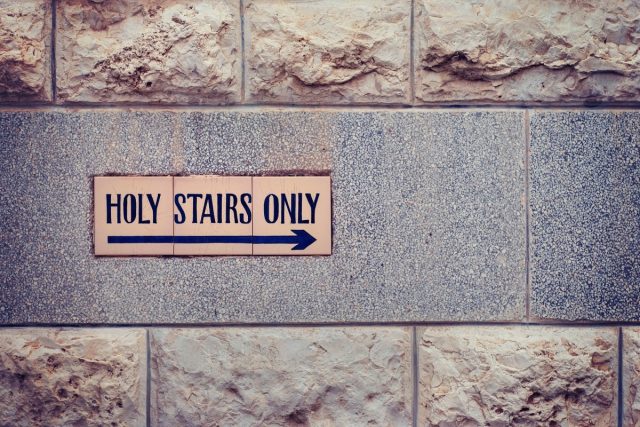 Exactly 5 years ago the National Coalition of Christian Organizations in Palestine (NCCOP) issued a final plea for help in an open letter to the World Council of Churches and the ecumenical movement. It was signed by over 30 organisations in Jerusalem, the West Bank and Gaza.

It summed up the cruel and lawless situation in the Holy Land.

“We are still suffering from 100 years of injustice and oppression that were inflicted on the Palestinian people beginning with the unlawful Balfour declaration, intensified through the Nakba [Palestinian ‘catastrophe’] and the influx of refugees, followed by the Israeli occupation of the West Bank including East Jerusalem and Gaza and the fragmentation of our people and our land through policies of isolation and confiscation, and the building of Jewish-only settlements and the Apartheid Wall.

” A hundred years later and there is still no justice! Discrimination and inequality, military occupation and systematic oppression are the rule…. Despite all the promises, endless summits, UN resolutions, religious and lay leader’s callings – Palestinians are still yearning for their freedom and independence, and seeking justice and equality”.

The message ended with these ominous words:

‘Absence of all hope’

Ten years previously we’d had the ‘Amman Call’ at the WCC’s international peace conference Churches together for Peace and Justice in the Middle East held in Jordan. It contained a number of imperatives. They boiled down to this: “Enough is enough. No more words without deeds. It is time for action.”

This was followed in 2009 by the Kairos Document calling itself a “cry of hope in the absence of all hope”. It said they had “reached a dead end” in the tragedy of the Palestinian people and that decision-makers “content themselves with managing the crisis rather than committing themselves to the serious task of finding a way to resolve it”.

The faithful were asking: What is the international community doing? What are the political leaders in Palestine, in Israel and in the Arab world doing? What is the Church doing?

“The problem is not just a political one. It is a policy in which human beings are destroyed, and this must be of concern to the Church.”

What’s more, Kairos called for a system of economic sanctions and boycott to be applied against Israel – not as a revenge tactic but action to reach a just and definitive peace.

It also urged churches to revisit the fundamentalist positions being used to support the evil policies imposed on the Palestinian people, and to stop providing theological cover for the injustices they suffer.

What has the WCC actually achieved since then? It is great at making statements and little else. They just issued one. It’s the usual woffle in which the WCC “profoundly regrets” and does a lot of urging and appealing to other bodies (such as governments), but there’s little action beyond a warm tub of soppy words.

Don’t they realise that the two-state solution – which unbelievably is still “established WCC policy” – has been dead for 20 years? And that interfaith dialogue which they treasure so much is a cynical ploy?

Britain is still officially a Christian country. You wouldn’t think that 26 bishops of the Church of England sit in the Upper Chamber of our Parliament – the House of Lords – and…. do what?

Meanwhile the Holy Land, the wellspring of their faith, is being stolen from under their sniffy noses.