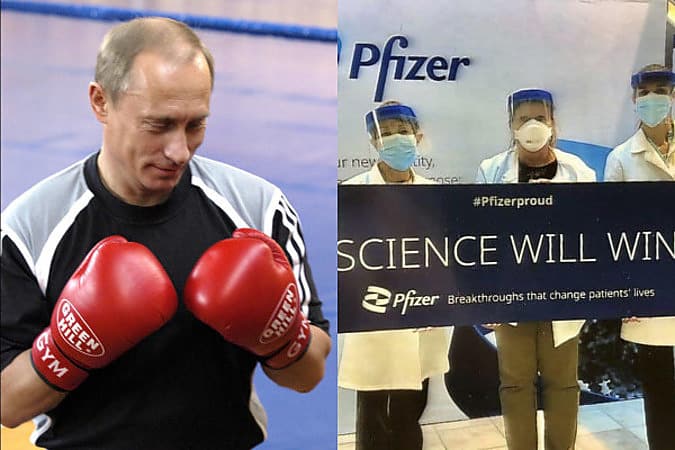 Is Putin plotting to purge the pill peddlers? If so, we have some suggestions

Is Vladimir Putin preparing to cleanse Russia of Big Pharma shills (his entire cabinet)? Some seem to think so and there is certainly evidence that some kind of anti-shill crackdown is coming. Let’s explore this intriguing news item together.

TASS is a major Russian state-owned news agency and one of the largest news agencies worldwide. [Ref.: Wikipedia]

Russian President Vladimir Putin has criticized foreign drug companies for pushing their products through local medical institutions and via doctors in Russia using their deep-pocketed resources.

“Unfortunately, foreign pharmaceutical companies attracted some heads of our medical institutions, and medical workers in 30 regions. And they pushed their medicines [on to the Russian market], paying quite a lot of money for it. We saw that under just one scheme they doled out 500 million [rubles],” he said at a meeting with Yury Chikhanchin, Head of the Federal Financial Monitoring Service.

Putin noted that such practice also exists in the EU and worldwide.

“They do it everywhere. They do it in Europe and overseas too. This is how they operate,” he said.

Chikhanchin responded by saying his agency was working the FSB to root out gratuitous Big Pharma grifting.

First of all: At the very least Putin deserves a golf clap for saying rude things about Big Pharma. No one loses points for doing that. So we salute you, Vladimir Putin. Keep it up.

At the same time: talk is cheap. If you’re going to launch a Novichok rocket at Big Pharma for “pushing their products through local medical institutions” (as TASS summarized) in 30 regions… this doesn’t exactly sound like the cleansing enema that Russia so desperately needs.

If Putin is sincere about expelling degenerate pill pushers from Russia, how far is he willing to go? Because in order to have a meaningful impact he’ll have to go pretty far. All the way, actually.

You need to cut the head off the snake. And the snake lives in Moscow. The snake has wrapped its slimly reptile-bod around various federal ministries. The snake is suffocating Russia at the highest levels of government.

If tomorrow the FSB announces it bagged the deputy director of a village clinic in Potato-Patch, Yakutia, this will not qualify as a successful crackdown on Big Pharma’s nefarious influence in Russia. It will qualify as a massive fail.

So which Big Pharma Strumpets should be Gitmo’d by the FSB? We’re so glad you asked.

All of the Important Russians who partied with Tedros and Big Pharma at the St. Petersburg International Economic Forum — straight to the gulag for some desperately needed rehabilitation.

And of course, no Big Pharma smackdown would be complete without frog-marching Madame Arbidol to the most remote Siberian penal colony. Sorry, we don’t make the rules.

Russia’s largest pharmaceutical firms also need to be put in the crosshairs. As we saw with Sputnik V, Russian drug companies enthusiastically collaborate with western pharmaceuticals to create horrific poisons for the masses. And the Russian government is invested in this gross cooperation — which is slightly discouraging?

Furthermore, the worst medicine-related grifting involves government contracts. And also: a lot of the pill peddling and unethical contracting is done legally.

As Tsargrad explained in an article unpacking Putin’s comments:

Tsargrad examined the problem and found out that this bribery is most often completely legal. To change the situation, you need to change the laws. […]

The peculiarity of Russia lies in the active participation of the state in the market of medical services. It is more profitable to get a big contract and relax than to work painstakingly with doctors, although this is not neglected either. Therefore, our “favorite” form of illegal cooperation of pharmaceutical companies with the heads of institutions and officials is to ensure victory in the auction.

So, for example, at the end of 2019, the head doctor of the republican oncological dispensary of the Ministry of Health of the Republic of North Ossetia-Alania was caught red-handed while receiving a bribe on an especially large scale. A few days before that, the head physician of the Penza Regional Oncology Center (and soon the director of the pharmaceutical company who gave him a bribe) received five years of a real term. There are other precedents, many of them. […]

Of course, the problem raised by Chikhanchin and Putin concerns not only Western companies — the domestic pharmaceutical industry has adopted the worst habits of its “big brothers” and interacts with medical personnel no less successfully.

That sums up the situation pretty well, we think.

We welcome any and all efforts to make Russian healthcare less scammy and more healthy.

But let’s not forget that after two years of “public health measures” — two years of non-stop grifting and murderous lies — Russia now finds itself in a very, very deep hole — a hole dug by the Russian government. Go figure.

We should add that there are rumors on the Russian interwebz that several high ranking officials are under investigation as part of this alleged Big Pharma crackdown. We haven’t found anything substantial to support this claim but… fingers crossed?