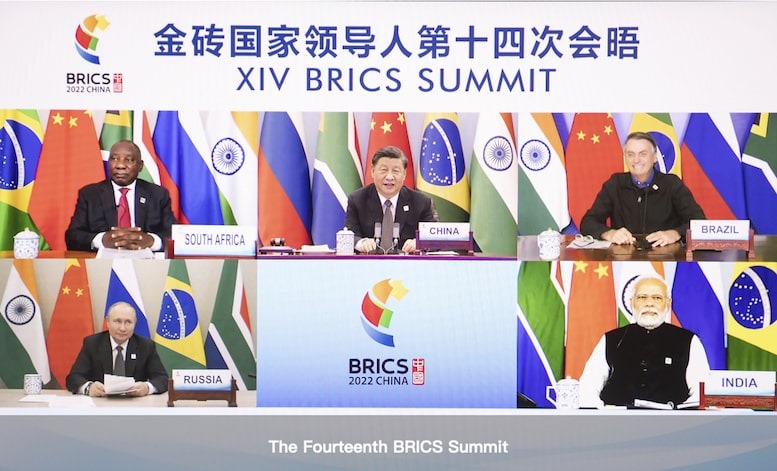 After the pandemic, caused by a SARS-Cov-2 virus created in the laboratory in a deal between the old China (that of the communist gang of Shanghai) and the US of the Obama-Biden administration with the help of the European Commission, and after the war in Ukraine I opposing world blocs are opening up to new alliances.

But while the European Union has expressed its intention to welcome Ukraine and Moldova, with all the development problems that these countries bring with them (especially because the gas-rich Donbass is more and more under the control of the Russian army), the BRICS alliance is ready to welcome two world powers such as Iran and Argentina.

If these new synergies are successful, on the one hand, they will increase the strategic military power of NATO, the true director of the EU, in Eastern Europe but on the other hand, they will make the alliance between Brazil, Russia, India, China, and South Africa an even stronger economic power that will allow the New Development Bank, the financial instrument of Brics, to question the economic monopoly of the IMF (International Monetary Fund).

Heads of state of the European Union have decided to grant Ukraine and Moldova the status of candidates to join the bloc, President of the European Council Charles Michel said as the EU held a summit on Thursday, according to TASS Russian News agency.

“Agreement. EUCO has just decided EU candidate status to Ukraine and Moldova,” he said on Twitter, using the acronym for the European Council.

“A historic moment,” he said. “Today marks a crucial step on your path towards the EU. Our future is together.” The official congratulated the leaders of Ukraine and Moldova.

Regarding Georgia, the European Council “decided to recognize the European perspective of Georgia and is ready to grant candidate status once the outstanding priorities are addressed,” Michel said.

The Islamic Republic of Iran has officially submitted its application to join the group of five leading economies made up of Brazil, Russia, India, China, and South Africa, the foreign ministry in Tehran announced on Monday. The move comes after the Iranian president addressed the BRICS summit last week Russia Today wrote.

While BRICS is not a treaty bloc, it has a “very creative mechanism with broad aspects,” Iranian Foreign Ministry spokesman Saeed Khatibzadeh said on Monday, according to the Tasnim news agency. He added that Tehran has already had “a series of consultations” with BRICS about the application.

Iran’s membership would “add value” for everyone involved, said Khatibzadeh, noting that BRICS members account for up to 30% of the world’s GDP and 40% of the global population.

On Friday, Iranian President Ebrahim Raisi addressed the BRICS virtual summit hosted by China and expressed Tehran’s readiness to share its capabilities and potential with the group.

Argentina has also applied to join BRICS. President Alberto Fernandez on Friday urged the creation of cooperation mechanisms that could represent the alternative to ostensibly private institutions run by – and in the interest of – the West.

During the session on Wednesday, Russian President Vladimir Putin said that the five-member group was working on setting up a new global reserve currency “based on a basket of currencies of our countries.”

In 2006, the foreign ministers of Brazil, Russia, India, and China met for the first time on the sidelines of the UN General Assembly, marking the beginning of BRIC cooperation. In June 2009, the BRIC leaders held their first meeting in Russia, upgrading BRIC cooperation to the Summit level. In 2011, with South Africa officially becoming a member, BRIC was enlarged to BRICS. Since 2009, the BRICS leaders have convened 13 formal meetings and 9 informal meetings.

On the evening of June 24, Chinese President Xi Jinping chaired the High-level Dialogue on Global Development in Beijing via video link and delivered important remarks.

President Xi stressed that China has always  been a member of the big family of developing countries. China will take pragmatic steps to give continued support to the 2030 Agenda for Sustainable Development, according to the China BRICS website.

China will work with all sides to advance cooperation in priority areas and mobilize resources for development to deepen global cooperation on poverty reduction and eradication, build capacity for food production and supply, promote clean energy partnerships; step up innovation, research and development, and joint production of vaccines; work on the conservation and sustainable use of land and marine ecology; and raise digital literacy and skills of the public, transform and upgrade the path to industrialization at a faster pace, and enhance connectivity in the  digital era to inject new impetus into the development of all countries.

China will set up a platform for experience and knowledge sharing on  international development, a global development promotion center, and a global knowledge network for development, for the purpose of exchanging  governance experience. We will host a global forum on youth development  and take part in the launch of a global action plan on youth  development, in a bid to pool as much strength as possible for the  implementation of the 2030 Agenda for Sustainable Development.

THE PUTIN STATEMENT DURING BRICS

Attempts to hinder the development of the states that are unwilling to live according to somebody’s rules and the reckless use of illegal sanctions instruments, compounded by the consequences of the coronavirus pandemic, have aggravated the downturn in the global economy the Russian President Vladimir Putin said during the Brics summit.

«Global trade is deeply mired in disputes, the settlement of which is deviating increasingly further from WTO norms and principles. Our colleagues mentioned the WTO today, but we know well what turns the situation within that organization has taken over the past years. The international monetary system is being destabilized, and industrial, logistics and investment chains are being broken».

«Rapid price increases for food, energy, and commodities are having a serious socioeconomic effect, especially on the development of countries in Asia, Africa, Latin America, and the Middle East. Colleagues and friends, I would like to stress once again: this is not the result of the past few months and by no means a consequence of Russia’s special military operation to protect Donbass the new Tsar added.

Once again, this jump in inflation did not happen yesterday. It has been happening over the past several years as a result of the long-term, and I want to stress this, the irresponsible macroeconomic policy of the G7 countries, uncontrolled money creation, and accumulated unsecured debts. This process was accelerated by the pandemic when both the supply and demand for goods and services drastically dropped on a global scale».

«The food market has been disrupted most severely. I said this at the recent St Petersburg International Economic Forum, and I want to say it again: they printed money, distributed it in their wealthy countries, and, as a vacuum cleaner, started scooping up all the food from the global market. Only recently, the United States was a food exporter – a net exporter – but now, I think, their imports are about US$17 billion more than their exports. This is a dismal indicator for food markets around the world»

Meanwhile, the soaring cost of essential agricultural commodities such as grain has hit the developing countries and markets the hardest as this is where bread and flour are vital for the survival of most of the population. I think it was French Queen Marie Antoinette who, looking over a crowd of starving citizens from her palace, reportedly said with indifference: “If they have no bread let them eat cake.” Putin further said.

«This is the same cynicism that certain Western countries are now showing by destabilizing the global production of agricultural products and dealing with this matter by restricting, for example, supplies of Russian and Belarusian fertilizers and impeding exports of Russian grain to world markets. Speaking of which, we are expecting a good harvest. God willing, everything will be fine and, if we supply 37 million tonnes to the world market this year, we would most likely be able to supply 50 million tonnes of grain. However, it is becoming more difficult to ensure the transport that carries grain, bulk carriers, transactions under trade contracts, and so on.

«At the same time, they are artificially fuelling hysterics over, say, the suspension of Ukrainian grain shipments via Black Sea ports. Meanwhile, according to American, and our, estimates, this is about 5 or 6 million tonnes of wheat plus 7 million tonnes of corn – this is something, but it does not resolve the problems in the world grain market».

«But that’s not even the point. I have said publicly many times, and want to emphasize again, that Russia is not preventing the export of Ukraine’s grain from its territory; we are ready to ensure safe passage of grain ships via international waters if, of course, the Ukrainian military demines the ports and nearby waters».