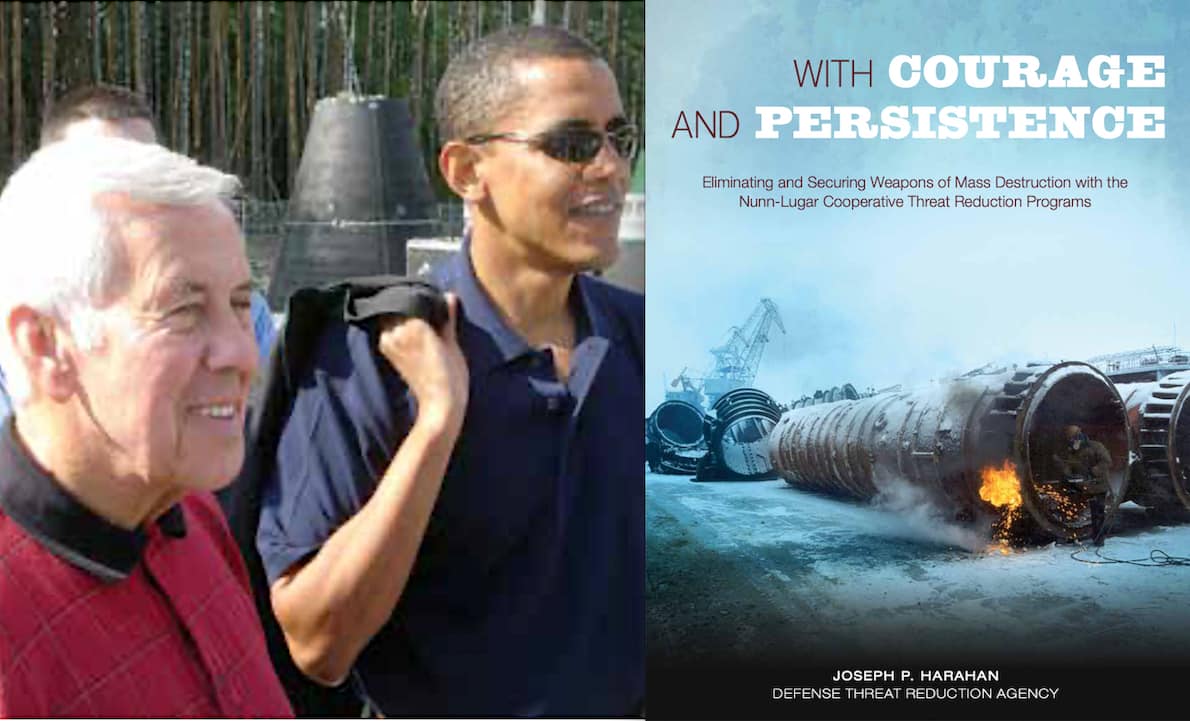 In the cover image the then Senators Lugar and Obama in 2005 in Georgia. Beside the book of the DTRA Pentagon agency

«When the Defense Department’s CTR policy officials refocused the program to deal with the administration’s global war on terrorism, they concentrated on developing programs and projects with those nations that had inherited biological laboratories, research institutes and sentinel stations associated with the Soviet Union’s biological weapons programs».

«During the Cold War, the Soviet Union had developed the largest biological weapons program in the world. A decade after the collapse and the formation of 15 new states, along with the rise of international terrorism, questions arose about the security, safety and number of dangerous pathogens at these research institutes and field stations».

«Unlike the inherited nuclear and chemical weapons, there was no central government ministry or bureaucracy in Moscow to negotiate with on requirements for new programs. Instead Jim Reid and Andrew Weber, senior CTR policy officials, traveled to the Russian biological research institute and negotiated biosecurity assistance and bioresearch projects».

«“We found,” Weber explained, “that peer-to-peer contact between scientists was the best way to find out what was really going on the ground and in the labs.”».

Thus begins the chapter entitled “Biological Threat Reduction Program Expands ” within the book written by Joseph P. Harahan for Defense Threat Reduction Agency (DTRA), a Pentagon’s Agency, which is a gold mine for understanding what is happening in Ukraine after the Russian invasion.

But it is also the filter that allows us to understand how Washington betrayed Moscow in the plan to reduce the biological weapons of mass destruction and why Russian President Vladimir Putin is so furious at the White House.

The book is titled “With Courage and Persistence: Eliminating and Securing Weapons of Mass Destruction with the Nunn-Lugar Cooperative Threat Reduction Programs” and since it was published ironically in 2014 it assumes the connotation of a mockery in addition to damage.

Because it tells of how the US Department of Defense, through the DTRA agency, even got its hands in the biological laboratories of the Kremlin, oriented towards the peaceful “glasnost” (public domain or transparency) started by Michail Gorbacev with the “Perestroija (reconstruction)” of the Communist Party of the Soviet Union.

And he narrated it precisely in 2014: the year in which the US, with the help of the Color Revolution format of George Soros and the Ukrainian embassies of other NATO countries, perpetrated the bloody coup in Kiev.

This coup was in fact functional not only to erode another state of the former USSR located on the border with the Russian Federation, not only to create the conditions for new nuclear missile bases of the Atlantic Alliance closer to Moscow, not only to search to steal the Donbass rich in gas and oil coveted by Burisma (in which Hunter Biden, son of the current American president Joseph Biden, then deputy to Barack Obama, was administrator) but also to take full control of the 12 biological laboratories created by the DTRA in Ukraine under the confident eyes of Russia who believed in the collaboration plan on the reduction of biological weapons.

The American defense line rests on the thin thread of selfless help to Ukraine to protect itself from the risks of bacteriological attacks. In short, the Pentagon, on which it depends on the DTRA, admits to having funded 12 of the 15 biological laboratories, we published the evidence already in the Ukraine Biolabs – 2 investigation, but claims to have then left the management of the research centers to the government of Kiev.

This is a huge lie. We have highlighted it again in the last report Ukraine Biolabs – 5, but we will demonstrate it even better in the next with the details and photos of the links between Ukrainian officials and the American Pentagon contractors, also thanks to OSINT documents on the activity of the DTRA itself. in the countries of the former Soviet Union.

Now we want to demonstrate how Vladimir Putin’s “good faith” towards the White House in the field of bacteriological weapons has been betrayed not only in Ukraine but even earlier in Georgia and finally in China.

In fact, in the Wuhan Institute of Virology, the USAID agency, a financial instrument of the CIA counter-espionage, by the will of the Obama-Biden administration, financed the experiments with HIV infected SARS functional to the artificial construction of recombinant chimeric viruses enhanced with the Gain of Function for “dual use” vaccine or bioweapon, just as it turns out to be SARS-Cov-2 which has 19 nucleotides identical to those of a gene built in the laboratory by the American pharmaceutical company Moderna in 2016, thanks to repeated funding from the Pentagon.

THE DEAL BETWEEN MOSCOW AND WASHINGTON ON BACTERIOLOGICAL DISARM

This book recounts the history of one of America’s most important national security programs and celebrates the work of the many public servants who have made it a success.

The Nunn-Lugar Cooperative Threat Reduction Program, which became law in 1991, was aimed at providing American funds and technical expertise to help safeguard and dismantle vulnerable stockpiles of nuclear, chemical and biological weapons and materials in the former Soviet Union.

Although much of this original mission has been completed, the capabilities of the Nunn-Lugar Program and the Defense Threat Reduction Agency (DTRA), which implements it, have expanded to meet global proliferation threats and much more important work remains to be done.

This is what was written in the introduction by former president of the Pentagon Armed Services Committee Samuel Augustus Nunn jr, a young non-commissioned officer of the Coast Guard and later Democratic Senator of Georgia, and former Senator Richard Lugar, former Mayor of Indianapolis. and Republican Senator from Indiana who died in 2019 at the age of 87.

Now let’s see what the book reveals and what it hides. “The Bush administration, grappling with two wars in Iraq and Afghanistan, has refused to engage with Russia. Except for the areas of non-proliferation and counter-terrorism, the two nations had few policies, programs or problems of cooperation »reads one of the premises in the first chapters.

All quotation marks are taken from the DTRA book, so we will avoid repeating the source and will only report when they are not.

When terrorists attacked New York City and Washington, D.C. on September 11, 2001, it devastated the United States. President Bush and his administration altered the nation’s national security strategy and foreign policy. Antiterrorism, counter terrorism and military invasions in Central Asia and the Middle East dominated the decade. Russia, under Putin, had a different set of objectives».

«In June 2002 Putin appealed at the G-8 Summit leaders meeting in Canada, asking them to assist Russia in destroying its chemical arsenals and obsolete nuclear missiles and submarines. National leaders pledged $10 billion over 10 years. The United States pledged another $10 billion. Then in December, the Bush administration, following an extensive review, issued its national strategy to combat weapons of mass destruction».

«It directed the administration’s departments and officials to dismantle the former Soviet Union nations’ WMD and infrastructure and to consolidate and to secure their remaining weapons and related technologies. The new strategy sought to increase transparency and encourage new standards of conduct in all policies and programs. For the next six years, the Nunn-Lugar CTR and other international programs were governed by this strategy».

A MILLION DOLLAR RAIN IN GEORGIA AND UKRAINE

«In 2003, the U.S. Defense Department received from Congress $40 million to start the WMD Proliferation Prevention Initiative with selective nations of the former Soviet Union – Uzbekistan, Kazakhstan, Ukraine and Azerbaijan.

“Increased efforts by terrorists to secure WMD and WMD components, materials and expertise,” CTR policy officials reported to Congress in 2004, “have demonstrated a need to improve the security of the non- Russian FSU states’ borders”».